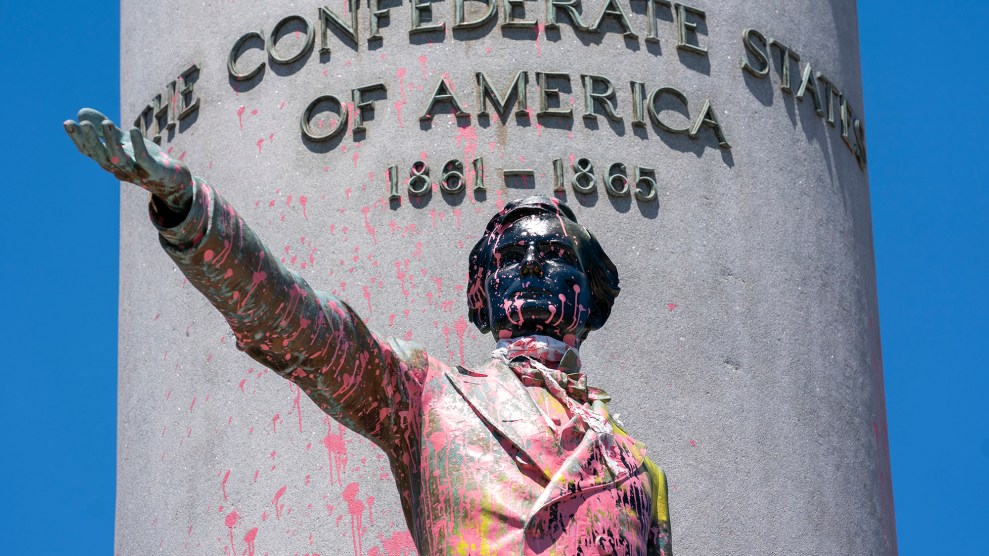 Paint and protest graffiti covers the Jefferson Davis Memorial in Richmond, Va., Sunday, June 7, 2020, following a week of unrest in the U.S. against police brutality and racism in policing. Jefferson Davis was the president of the Confederate States of America during the Civil War. (AP Photo/J. Scott Applewhite)

Late Wednesday night, a group of protestors in Richmond toppled the statue of former Confederate President Jefferson Davis that has towered over Monument Avenue for 113 years. A few hours earlier, members of the American Indian Movement brought down a statue of Christopher Columbus outside the Minnesota state capitol in St. Paul. And in Portsmouth, Virginia, demonstrators—equipped with ropes, bolt cutters, and sledgehammers—beheaded four statues that once formed a Confederate monument. “A marching band played in the streets,” the Virginian-Pilot reported, “and other protesters danced.”

The protests that have swept the United States and other countries in the wake of last month’s killing of George Floyd by Minneapolis police, have led to renewed calls for the removal of white supremacist monuments. A statue of a slave-trader in England was thrown into the River Avon. A statue of King Leopold II, butcher of the Congo, came down in Belgium. Defacing monuments to oppressive figures is a natural outgrowth of a push to grapple with structural racism and its symbols. But what’s striking, watching a seemingly endless stream of statue-toppling videos, is how activists have made a process that once seemed insurmountable look so easy.

Protesters in Richmond have pulled down a statue of Jefferson Davis, the former president of the Confederacy pic.twitter.com/Myl0UfDSNI

Activists and their allies in government have been pushing for the removal of Confederate monuments for ages, but they’ve been stymied and delayed by crafty legislators, lawsuits, and lack of political will. Now, it seems, they’ve found a way to bypass that resistance.

There was a national push to remove Confederate monuments in 2015, after the white-supremacist massacre in Charleston, and in 2017, after the white supremacist rally in Charlottesville—which was itself in response to an effort to remove a Confederate monument. Baltimore (which was never part of the Confederacy) removed four monuments—three celebrating Confederates and one honoring Chief Justice Roger Taney, who authored the Dred Scott decision—in the middle of the night in August 2017. But most removal efforts unfolded more like what Mayor Mitch Landrieu experienced in New Orleans, when he sought to remove Confederate and Redemption-era monuments from the city. The city’s efforts to take down the statues took two years. There were death threats and court battles. Landrieu worked so hard to build a good-faith case that the resulting speech was turned into a book.

As monuments began to come down, some state governments, such as Texas, tried to change their laws to make it even harder to remove statues. That effort failed, but a similar move in Alabama passed. Local Confederate groups have invoked old contracts and laws that were already on the books to thwart private and municipal efforts to turn the page—Vanderbilt University only succeeded in renaming its Confederate Memorial Hall in 2016, 14 years after its President E. Gordon Gee first proposed to do so. It’s now “Memorial Hall.”

When I was in Richmond in 2017 covering the gubernatorial election, there were activists standing vigil beneath the Robert E. Lee statue on Monument Avenue. They were not protesting its existence; they were opposing calls for its removal. The city’s Democratic mayor, Levar Stoney, had formed a commission to look into removing or altering the monuments. The Democratic nominee, Lt. Gov. Ralph Northam (who is now governor) agreed with Stoney; in response, Republican nominee Ed Gillespie (who is from New Jersey) had said they should stay up. The Virginia Republican Party, which often seems to be participating in a performance art piece about its own shrinking relevance, charged that Northam had “turned his back on his own family’s heritage.”

At the time, the momentum for monument removal felt like it was all happening so fast. Just two years earlier, in 2015, then-Gov. Terry McAuliffe, a former Democratic National Committee chairman from Upstate New York, had called the Lee and Davis statues “parts of our heritage” and emphasized many Confederate soldiers were not motivated by slavery. “Leave the statues and those things alone,” he said.

The monuments were still up this spring. Stoney’s commission recommended scrapping the Davis statue in 2018, and Northam signed a law in April giving municipalities more power to alter or remove monuments, but the legal battle continued apace—on Monday, a federal judge blocked the state from getting rid of Gen. Lee until another lawsuit could be resolved. Meanwhile, in Portsmouth, the Pilot reported, protesters took matters into their own hands because they felt “frustrated by the Portsmouth City Council’s decision to put off” the removal of that city’s monument. (There was a downside to going the less formal route—one Portsmouth protester was injured during the removal and hospitalized.) A former councilman told the paper he had proposed getting rid of it at a meeting five years ago. A few hours before the crowd assembled that night, the council voted to delay any action on the monument for another month.

Protest movements, like pandemics, have a way of getting people to reimagine what’s possible in their lives. It turns out you can pay people to stay home, or sell cocktails to go, or cover a medical test for anyone who needs one. You can get Mitt Romney to start saying “Black Lives Matter,” and you can get your state government to repeal its law shielding police misconduct records from the public. The obstacles that stood in the way of such changes did not need to be there after all—or perhaps they were an illusion all this time. You don’t have to wait forever to get rid of monuments to white supremacy. It turns out all you need is a sledgehammer and some rope.