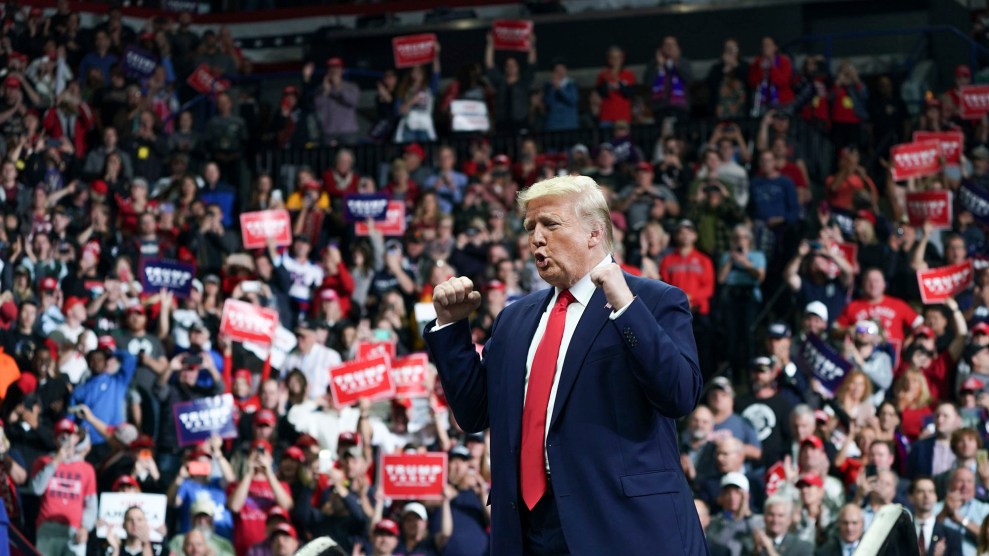 President Donald Trump is greeted by a cheering crowd at the Target Center in Minneapolis on October 10, 2019.Glen Stubbe/Star Tribune/AP

When President Donald Trump first weighed in on Wednesday on the caught-on-camera killing of George Floyd by Minneapolis police, he was uncharacteristically subdued. Floyd’s death was “sad and tragic,” he tweeted. “Justice will be served!” By the early morning hours on Friday, this moment of compassion was at an end. Rioters in the city were “THUGS,” he wrote, and he proposed sending in the National Guard to “get the job done right.” In a tweet so depraved that Twitter appended a disclaimer, he quoted an infamous 1960s Miami cop: “when the looting starts, the shooting starts.”

Trump’s comments weren’t just those of a head of state addressing unrest in a major city. They were also the words of a candidate for reelection who believes that what happens in Minnesota could make or break his chances this fall. The president has made repeated campaign stops in the state over the last four years; in threatening violence against protesters, he was sticking to a longstanding strategy. Trump believes that by attacking the state’s largest city and casting its residents as radical refugees and “thugs”—by driving a huge racist wedge between the Twin Cities and all the rest—he can flip the state he lost by the smallest of margins in 2016.

This isn’t the first time Trump has weighed in on a law enforcement issue in Minneapolis. He previously positioned himself as the defender of the city’s police against overly PC libs—wrapping himself in the flag of “law and order” politics. Last fall, ahead of a Trump campaign rally in Minneapolis, Mayor Jacob Frey informed police officers they could not appear at the rally in uniform. In response, the city’s police union began selling special red “Cops for Trump” t-shirts, with an American flag overlaid on the outline of the state. Trump weighed in:

Someone please tell the Radical Left Mayor of Minneapolis that he can’t price out Free Speech. Probably illegal! I stand strongly & proudly with the great Police Officers and Law Enforcement of Minneapolis and the Great State of Minnesota! See you Thursday Night!

Get your great T-Shirts, “Cops for Trump,” at https://t.co/pmhDDXsIlx REALLY NICE! Thank you to Minneapolis Police Officers & Union! @foxandfriends

At the rally, Trump was joined on stage by Lt. Bob Kroll, head of the Minneapolis police union, who used his time on stage to attack former President Barack Obama for his “oppression” of law enforcement. Kroll wore the “Cops for Trump” t-shirt. Following Kroll, a procession of police officers, all wearing the “Cops of Trump” shirt, walked across the stage to shake the president’s hand. Trump even saluted one of them.

While Trump heralded the police as the most hallowed of institutions, he whipped the crowd into a frenzy against what he considered their antithesis—the city’s “America-hating” Democratic congresswoman, Ilhan Omar.

In 2016 I almost won Minnesota. In 2020, because of America hating anti-Semite Rep. Omar, & the fact that Minnesota is having its best economic year ever, I will win the State! “We are going to be a nightmare to the President,” she say. No, AOC Plus 3 are a Nightmare for America!

Just a few months after telling Omar, a Somali refugee and one of the first two Muslim women to serve in the House, to go back to the country she came from, Trump devoted six minutes of his address to tearing into the congresswoman. Images of the hijab-wearing Omar flashed across the jumbotron as he spoke, just in case the crowd didn’t know what she looked like. She was an “America-hating socialist,” he said.

Trump segued from an attack on Omar into an attack on the community she comes from and represents—the tens of thousands of Somalis living in the Twin Cities. Refugees from Somalia were a threat to the American way of life, he warned. (His son, Donald Trump Jr., has even claimed that Democrats want to “repopulate” Maine with Somali refugees.)

Trump has not just sought to rhetorically bludgeon people of color in Minnesota, though. He’s governed that way too. In the closing stretch of the 2016 campaign, he told Minnesota voters the state had “suffered” because of the “large numbers of Somali refugees coming into your state.” He promised to ban Muslims, and though he didn’t quite do that, he did effectively ban Somali refugees from coming to the United States.

In targeting a specific minority community, Trump was tapping into a very real animosity among certain white voters in Minnesota. In a memorable 2019 New York Times story, one conservative activist put it bluntly: “These aren’t people coming from Norway.” When activists in St. Cloud tried to shut down the city’s resettlement program, they made red hats, modeled off the president’s. They said “Make St. Cloud Great Again.” MSCGA.

Trump’s campaign in Minnesota, now as ever, is rooted in white grievance and fear and what he calls “law and order,” by which he means targeting immigrants and people of color for abuse—by pinning all that’s gone wrong on blue cities and the people who live there. He wants to pit the people he thinks he can get votes from against the people he can’t, and now that he sits behind the Resolute Desk, he doesn’t really act as if he works for the latter group too. They serve no purpose for him, except as punching bags.

So it’s all going to be like this, from now until November. Trump is going with this again, because he thinks it works and also because he can’t help it. He craves power but not the responsibility that comes with it. It’s not clear, however, that it’s any sort of political masterstroke—that “what Trump wants” or what “plays into his hands” correlates at all to what is actually good for him. He would have lost the 2016 election but for an unprecedented series of events, and even as it was, his much-hyped attempts to reconstitute Richard Nixon’s winning coalition half a century later by relentlessly hammering immigrants and “lawless” cities netted him a smaller percentage of the popular vote than Mitt Romney. The president is a bully, after all, but he is also an idiot.