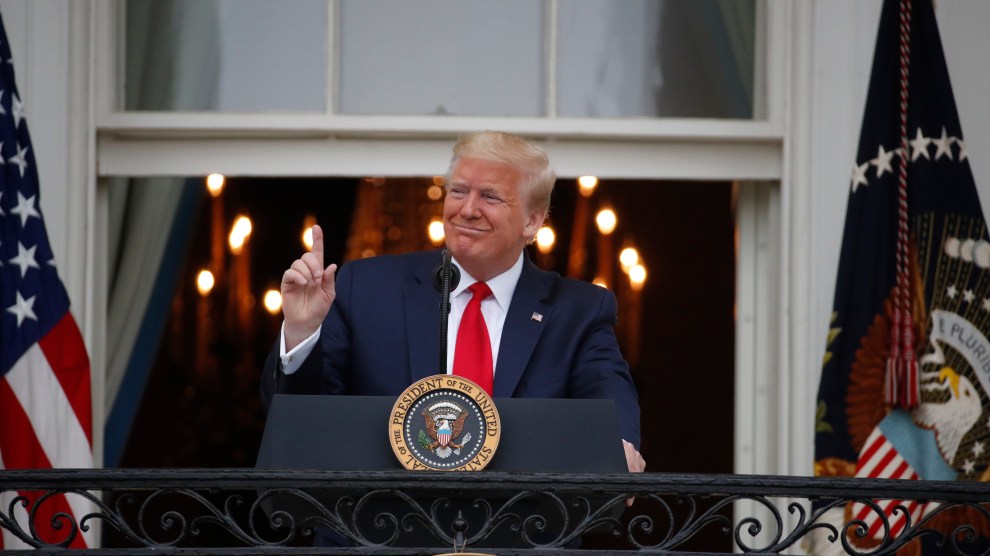 Since earlier this month, Donald Trump has been pushing a debunked conspiracy about MSNBC host Joe Scarborough having murdered one of his employees in 2001, when he served in Congress.

It’s unclear how the conspiracy initially made its way to Trump, but since he amplified it on May 13, a fringe conspiracy site has been pushing the conspiracy heavily. Its owner and founder has even earned a retweet from the president himself about Scarborough.

The site, True Pundit, whose links Trump has tweeted, also played a key role in recently boosting another debunked but massive conspiracy: Plandemic, a 25 minute YouTube video spreading falsehoods about the coronavirus that went viral at the beginning of May. The site has pushed other disinformation, including a made up claim that the FBI was aware of and did nothing about Chinese hackers breaking into Hillary Clinton’s private server, and another in which Clinton proposed targeting Julian Assange with a drone strike.

Kate Starbird, a professor of human centered design and engineering who researches internet disinformation at the University of Washington, noted in a Medium post that True Pundit’s articles about the conspiracies outlined in Plandemic correlated with early spikes of searches for the main doctor featured in the discredited video, Judy Mikovits. Starbird also found that True Pundit was also the second most linked-to website in tweets about Mikovits.

Prior to Trump tweeting about the Scarborough conspiracy True Pundit appeared to be one of the only major sites routinely recycling the claim. The site and its founder, Michael D. Moore, a former journalist who posted pseudonymously before he was uncovered by BuzzFeed‘s Craig Silverman, have routinely pushed the theory at various points in the last decade. Since 2017, Moore has tweeted the hoax allegations several times a year, and the TruePundit Facebook account has also repeatedly pushed the claim.

Another possible source for the claim could be The_Donald, the message board community of rabid Trump supporters who started on Reddit but decamped the platform in favor of a private forum after the company began taking enforcement actions on its notoriously toxic members.

A moderately successful post on the new The_Donald forum from April 23 appears to be one of the most recent internet mentions of the conspiracy prior to Donald Trump Jr. tweeting about it on April 30 and the president tweeting about it on May 4. It’s unclear what exactly prompted Trump Jr. to mention the conspiracy. In 2018, True Pundit tweeted at Trump Jr., sending him a link to a page on its site pushing the conspiracy about Scarborough. Trump Jr. also follows Moore’s account. The president’s oldest son has a history of trawling the internet for weird content about his father and has posted memes that likely originated on The_Donald forum.

What show is Joe going to go on to discuss Lori Klausutis? https://t.co/sL4AxAQrlb

Moore’s tweets about the hoax have gone viral several times since Trump mentioned the conspiracy; just two tweets from Saturday garnered thousands of retweets and likes.

Starbird didn’t include data quantifying True Pundit’s role spreading the Scarborough hoax in her Medium post, but notes Trump’s interaction with the site on Sunday, when he quote tweeted their 2011 story about the death speciously linked to Scarborough.

To Starbird, Trump’s promotion of the theory and of Moore and his site, are a perfect and concerning example of how “conspiracy theories move from the margins of the internet into the mouths (and Twitter accounts) of political leaders” at a time when the president has worked to erode traditional media outlets’ credibility.

“Some of the same political leaders who promote these kinds of websites simultaneously attack professional journalism as ‘fake news’—leaving their viewers with few resources for challenging/verifying their false claims,” she wrote.