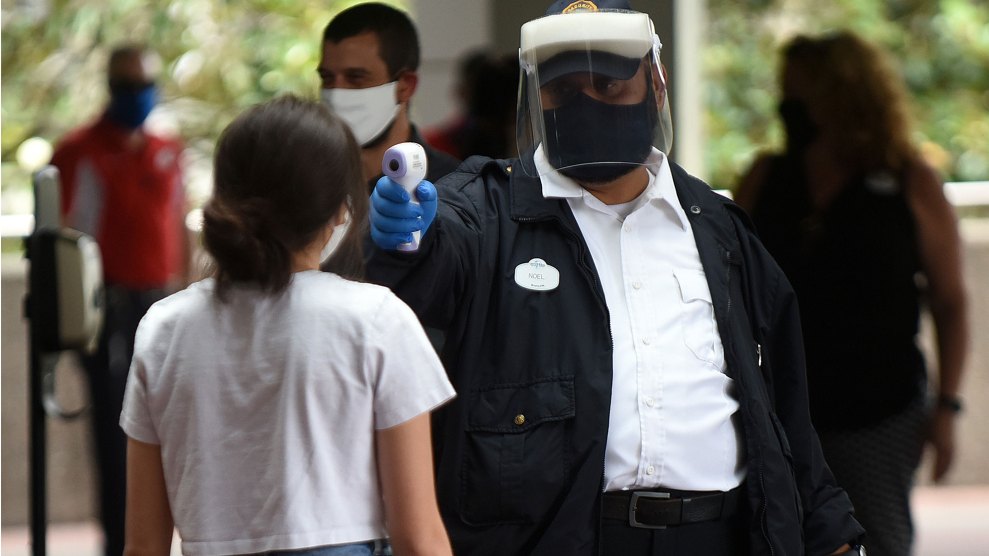 ORLANDO, UNITED STATES - MAY 14, 2020: A security employee checks the body temperature of a guest before allowing her to enter at the Universal Orlando's CityWalk as sections of the entertainment and retail district begin to open for limited hours.Paul Hennessy / Echoes Wire/Barcroft Media via Getty Images

William Ferguson was working as a security guard at a factory in California—until one day last month, when his employers assigned him a new job: conducting temperature checks for employees entering the plant.

Ferguson was given a mask, goggles, and gloves “but what we didn’t get was sufficient training,” Ferguson said. “They basically handed us the equipment and a printout of a powerpoint presentation.” On the first day, he learned how to use the thermometer gun, stood at the front of a line of employees and started taking temperatures at the door. He asked employees how they were feeling and if they had any symptoms as he pointed the digital thermometer a few inches from their foreheads. If their temperature was higher than 100.4 degrees Fahrenheit, he was supposed to send them home. It all felt like a lot of responsibility. “I had to basically become a medical tech, but I’m highly unqualified to do this,” he said.

“I had to basically become a medical tech, but I’m highly unqualified to do this.”

Ferguson isn’t alone: Workplace temperature checks are becoming more common as the pandemic wears on. They’re also happening at airports, restaurants, and stores. But it’s not clear how effective these screenings are at preventing the spread of the coronavirus—especially when they’re conducted by employees with inadequate training. Meanwhile, some legal experts worry that the checks might lead to invasion of privacy or even civil rights violations. Here’s a rundown of what we know so far about the benefits and drawbacks of temperature checks—and the privacy concerns that come with them.

Temperature checks won’t catch everyone who has COVID-19. Epidemiologist Mackenzie Weise, an infection prevention clinical program manager with the healthcare software company Wolters Kluwer Health, notes that while temperature screenings will pick up on a subset of infected people, many carriers will be asymptomatic or presymptomatic when their temperature is taken. A recent study looked at 5,700 COVID-19 patients hospitalized in a New York City area hospital and showed that only 30 percent had a fever at triage. And from what we know about the coronavirus, an infected person can transmit the virus with or without a fever. A person could also have a fever for other medical or circumstantial reasons, Weise added. “For example, if screening is implemented at a place of work, and you have an employee that just jogged from the bus stop, now they have an elevated surface temperature.” And like with any piece of technology, there may be failures with thermometers.

There’s a lot of confusion about how best to implement and conduct temperature checks. The Centers for Disease Control and Prevention guidelines say temperature checks are an “optional strategy that employers may use.” They instruct employers to make sure the person conducting the screening is keeping adequate physical distance from the people they are screening. Beyond that, though, they’re fairly vague, says Aaron Carroll, a professor of pediatrics at Indiana University School of Medicine. He listed questions that the guidelines don’t answer: What do I do if someone shows a high fever? What if they refuse to listen to me? What questions should I be asking? What’s more, long lines for temperature checks could actually intensify the spread of the virus. “The last thing we would want to do is have a very lengthy screening process, with lines of people waiting,” Weise said.

When Ferguson and I spoke, he brought up the lack of training he was provided, especially when things didn’t work as planned. He said that at times he had to take the temperature of workers who were not wearing masks, so to protect himself, he asked them to turn around and pointed the temperature gun to the back of their heads. Weise, the epidemiologist, worries about lack of training. “The thermometers need to be held at a certain distance, and they do need to be pointed in a specific space,” she said.

Temperature checks might violate people’s privacy and rights. The Equal Employment Opportunity Commission loosened its ADA guidelines on temperature checks in response to the pandemic—they now state that “employers can now do them and also ask employees if they’re experiencing symptoms to stop the spread of the coronavirus.” The ACLU said in a recent report that a remote temperature check is “not an enormous invasion of privacy, especially if individual records are not retained—as they should not be outside of health care contexts.” However, the report added, “we don’t want to wake up to a post-COVID world where companies and government agencies think they can gather temperature or other health data about people whenever they want.” Personal data should not be stored, the report said—people should have the right to leave rather than be subjected to a public temperature test, and employees should have the option to monitor their own temperature. The ACLU recommends “having a conversation with those who show up as positive, rather than summarily blocking them from entry.” The report adds that “for people who may be denied access to a critical service, such as appearing in court or applying for benefits, there should be systems in place that give them alternate means of access.”

Employers must also be vigilant about bias and discrimination, said ReNika Moore, director of the ACLU’s Racial Justice Program. “We’ve seen even during this pandemic, fuzzy guidelines, such as those around social distancing, have led to racial profiling and harassment of communities of color.”

Temperature checks alone can’t stop this virus. In some parts of Asia, fever screening is now ubiquitous: Earlier this year, Asia Times reported, “one can expect to have a body temperature check multiple times before being allowed into public venues in China and other Asian countries hit by the contagion.” Yet it’s exceedingly rare even in Asia for screeners to catch infected passengers, an article in the journal Science noted. “And even if screeners find the occasional case, it has almost no impact on the course of an outbreak.”

And here in the United States, where temperature checks are still new, public skepticism may render them even less effective. Indiana University’s Carroll pointed out that if people feel it’s intrusive to check their temperature or if they try to work around the screening, then the screening is completely useless. “If I’m like, ‘I’m seeing this movie and no one’s gonna stop me,’ then it’s all moot.” Carroll believes that temperature checks will work best in combination with other tools: masks, physical distancing, and handwashing, and staying home when sick.

Of course, all of these tools work best with clear guidelines, said Carroll—and he noted that the lack of direction on temperature checks is characteristic of the federal government’s overall approach to the virus so far. “It’s a real problem coming from the top down,” he noted. “Our response to this is woefully unorganized and inconsistent and that’s a real problem.”