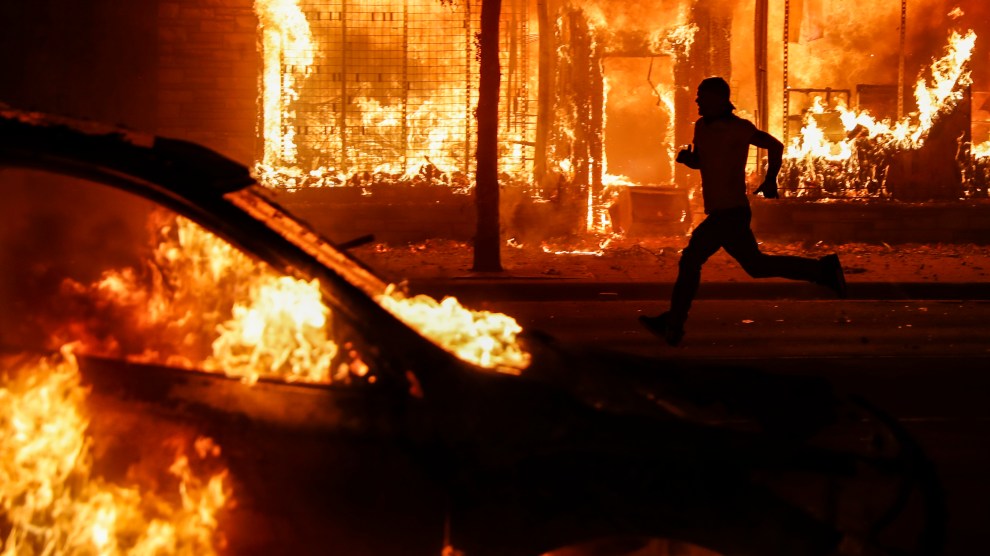 Some of the people protesting in Minnesota last night came from other states, and they likely included members of white supremacist groups, Gov. Tim Walz said in a press conference Saturday morning, after a long night of protests in dozens of cities over the police killing of George Floyd.

Walz said he had received intelligence from law enforcement agencies that led him to believe the protesters included white supremacists, but added that he could not confirm this. He said police officers deployed to the protests faced improvised explosive devices and a “highly evolved and tightly controlled group of folks bent on adapting their tactics to make it as difficult as possible to maintain that order.”

“We also from some national sources got reports on drug cartels that were directing their resources to restore their drug markets in some of the areas that had been looted and some of the businesses that had been operating by them,” Minnesota Department of Public Safety Commissioner John Harrington said at the briefing.

St. Paul and Minneapolis mayors Melvin Carter and Jacob Frey echoed Walz. At the briefing, Carter said he had been informed that everyone arrested during the St. Paul protests the night before had come from another state. “I want to be very, very clear: The people that are doing this are not Minneapolis residents,” Frey added. “They are coming in largely from outside of the city, from outside of the region, to prey on everything we have built over the last several decades.”

But later on Saturday, Carter walked his comments back, saying he had based them on inaccurate information from the police. He said further investigation revealed that more than half of those arrested during the St. Paul protests on Friday night lived in Minnesota. And a local news outlet, Kare11, also examined arrest records in Minneapolis from Friday to midday Saturday and found that nearly everyone arrested lived in the city or the surrounding metro area; only five of the people arrested were from outside Minnesota.

Still, Carter said his friends who are local activists in the movement for racial equality are concerned about who is behind the arson and vandalism during protests. “I hear them say, ‘We don’t know these folks…who are agitating, we don’t know these folks who are inciting violence,” he said at the briefing. “And those folks who are agitating and inciting are taking advantage of the pain, of the hurt, of the frustration, of the anger, of the very real and legitimate sadness that so many of our community members feel.”

Walz has called for the full mobilization of the Minnesota National Guard, the largest deployment of the force in the state’s history. While the National Guard is often called up to respond to civil unrest like protests, “these deployment levels are reaching deployment levels when we deploy overseas in support of Operation Enduring Freedom and some of those types of operations,” he said.

This post has been updated to reflect the clarification from St. Paul Mayor Carter that more than half of those arrested in the city’s protests Friday night live in Minnesota, and to reflect additional reporting from Kare11 that an overwhelming majority of people arrested in Minneapolis on Friday night and early Saturday live in or near the city.