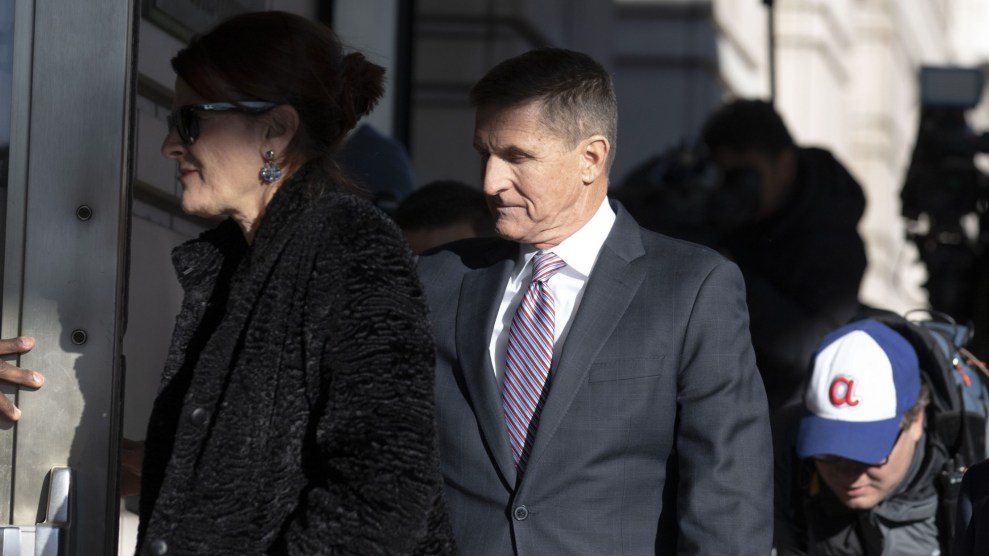 Michael Flynn arrives at US District Court for sentencing on Dec. 18, 2018.Alex Edelman/CNP via ZUMA Wire

The Trump White House has released a list of officials in President Barack Obama’s administration who “may have received” access to National Security Agency reports from electronic surveillance in which Michael Flynn, who later became Trump’s national security adviser, was identified by name. NSA electronic surveillance of Russian Ambassador Sergey Kislyak had picked up secret conversations he had with Flynn in which Flynn attempted to influence Russia’s reaction to sanctions just imposed by Obama in response to Russia’s interference in the 2016 election.

The list, declassified at the request of acting Director of National Intelligence Richard Grenell, was made public Wednesday by Sen. Charles Grassley (R-Iowa). It includes a note explaining that is not a list of people who asked that Flynn’s name be unredacted, or “unmasked,” in a report in which the identify of an American citizen would normally be hidden.” “Each individual was an authorized recipient of the original report,” it says, while noting it is not clear who actually saw the “unmasked information.”

The note explains that 16 Obama officials requested “unmaskings for different NSA intelligence reports for select identified principals.” The report doesn’t include who those 16 people were, but does name 39 officials who then may or may not have seen the report that included Flynn’s identity. That list included FBI Director James Comey, Treasury Secretary Jacob Lew, Director of National Intelligence James Clapper, CIA Director John Brennan, White House Chief of Staff Denis McDonough, and Vice President Joe Biden. A memo to Grenell, signed by National Security Agency Director Paul Nakasone, says each named person was “an authorized recipient” of the information and that the unmasking was approved through the agency’s normal protocol. Translation: Officials with regular access to classified information were authorized to hear about Flynn’s suspect activities.

But the list has already been seized on by promoters of President’s Trump “Obamagate” claim. This is a false claim that Obama was involved during the presidential transition in an effort to unfairly smear Flynn. Flynn pleaded guilty in late 2017 to lying to FBI agents about his conversations with Kislyak. But after public attacks on the case by Trump, the Justice Department, at the behest of Attorney General William Barr, is trying to drop the case. And Trump boosters are already misrepresenting the new information to bolster their phony claim.

Declassified documents reveal V.P. Biden ordered the unmasking of General Flynn’s private conversation.
Anyone think that Biden might have abused his power to go after a political opponent…

While Biden was on the authorized list of people who may have seen Flynn’s name, so far there is no evidence that Biden personally ordered Flynn’s “unmasking.” But even if he did, it would hardly controversial that Biden and other officials would ask to review reports referencing an American involved in clandestine high level contacts with foreign governments.

Flynn was no innocent actor as this was all unfolding. As the Justice Department noted in a court filing last week seeking to drop charges against him, the FBI investigated Flynn in 2016 due to suspicions that he was a Russian asset. In early 2017, the FBI was ready to drop that investigation, but agents continued investigating him after they learned he may have broken a law against private citizens interfering in foreign policy through his conversations with Kislyak, and other foreign officials.

It’s safe to say no past incoming National Security advisers had the sort of red flags that Flynn did. In 2016, he had also secretly agreed to lobby for Turkey, even while he advised Trump. He also admitted lying to DOJ about this as part of his guilty plea. (He was also involved with a complicated plan through which a group of former military officials hoped to transfer sensitive nuclear technology to Saudi Arabia.) Flynn had potentially compromising ties to foreign states including Turkey as well as Russia. That may explain why the Obama officials given access to information by NSA on Flynn included the US Ambassadors to Turkey and to Russia.