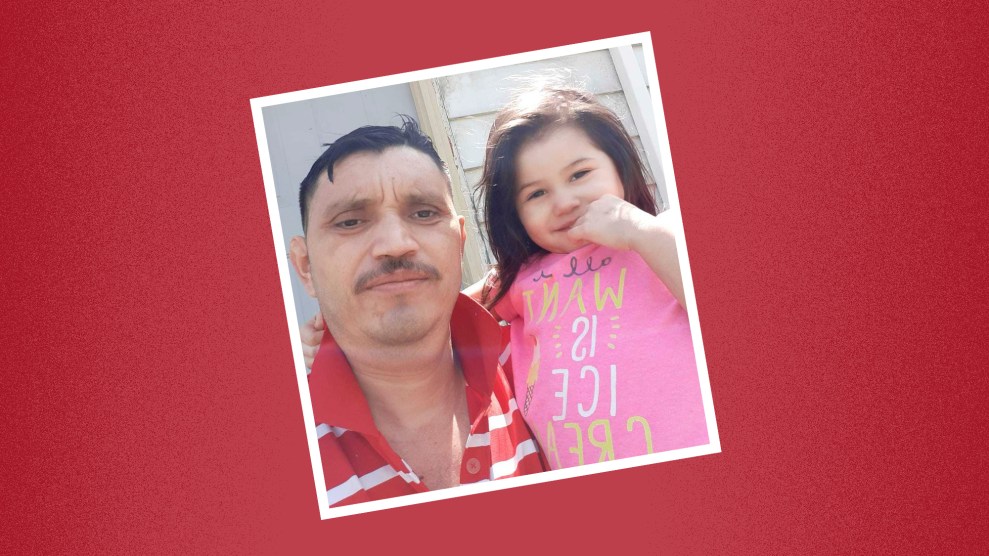 Óscar López Acosta, a 42-year-old Honduran man who died of complications from COVID-19 on Sunday after being released from ICE detention, with his daughter Lourdes López Mejía.Mother Jones illustration; Lourdes Mejía Flores

On April 23, the staff of the Morrow County Jail in Gilead, Ohio, told immigration detainees that a feverish man they’d been sharing a crowded dorm with had tested positive for COVID-19. The next day, Immigration and Customs Enforcement abruptly released one of the men who’d potentially been exposed without testing him: Óscar López Acosta, a 42-year-old Honduran man with diabetes who’d spent 18 months in government custody.

On May 3, López tested positive for COVID-19 after an ambulance took him from his home to the Miami Valley Hospital in Dayton. The next day, ICE confirmed that 47 people in its custody at Morrow County had tested positive. The jail was only holding 51 immigration detainees at the time. It was exactly what experts had warned would happen if ICE didn’t use its power to release people: Nearly everyone had become infected after sharing a dorm in which social distancing was impossible.

On Sunday, López died from complications from the coronavirus after being released from the hospital, the local coroner’s officer confirmed. Last week, Carlos Ernesto Escobar Mejía became the first person to die in ICE custody after contracting COVID-19. Ohio attorneys, immigrant advocates, and López’s widow, Lourdes Mejía Flores, believe López is the second to die after being infected in ICE custody. “This infection is on ICE’s hands,” said Elizabeth Bonham, a staff attorney at the American Civil Liberties Union of Ohio.

Mejía, Lopez’s wife, told me her husband had almost no appetite when he arrived home in Dayton, which is not a major coronavirus hot spot. Aside from two quick trips to a store, he stayed inside, his widow said. But his symptoms continued to get worse. His body ached and he was vomiting the week he got back. “I can’t handle it,” he said soon before calling an ambulance later that week. “I’m dying.” López then spent nearly a week in the hospital before dying two days after being released, said Mejía, who noted that she started feeling feverish on Tuesday.

Karen Bradley, whose immigration law firm represented López, said an ICE official called her on Tuesday morning to discuss López’s case. She responded that López was dead. When she told the official that López got COVID-19 at the jail, he replied “yeah” and didn’t refute her claim, according to Bradley. (When I called him, the official declined to speak with me.)

It will likely be impossible to know for sure whether López contracted the virus in detention. ICE spokesperson Khaalid Walls told me that López was not tested before ICE released him. Through April 24, Walls added, no asymptomatic detainees at Morrow County were tested.

López was originally from San Francisco de La Paz, a small municipality about 100 miles northeast of Tegucigalpa, Mejía said. They had three children: an 18-year old boy and a 2-year-old girl who live with Mejía in Ohio, along with an 8-year-old daughter in Honduras. “He was a very responsible person,” Mejía said in tears. “He was very caring. He was always attentive.”

López was deported in 2009 and again in 2012 before returning to the United States soon after. In October 2018, a few days after his daughter’s first birthday, his teenage son got into a car accident. López went to help him. The police called ICE, who detained López. He was quickly transferred to Justice Department custody to await trial for reentering the county without authorization.

Normally, someone in López’s position would plead guilty, Cheryll Bennett, the federal public defender who represented him, said. But Bennett said he chose to stand trial to delay being sent back to Honduras, where relatives had been killed and he wouldn’t have access to quality medical care for his diabetes. During his January 2019 trial, she added that López went into diabetic shock after the jail where he was being held forgot to give him his insulin injection.

In May 2019, López was transferred back to ICE custody after being sentenced to time served by a federal judge. From there, he was held in Ohio immigration detention centers as he applied for protection from persecution in Honduras. Bradley, the immigration attorney, explained that three of López’s nephews were killed by a gang in Honduras in 2010. In October, he lost his case and subsequently appealed the decision.

Anna Babel, a professor of Hispanic linguistics at Ohio State University, started visiting López late last year as a volunteer. She documented much of what López told her in emails to immigrant advocate Danya Contractor, who helped set up a fund to raise money for López’s family. In February, López told Babel that a man in his unit punched him in the chest when López went to use the bathroom during the night. He said that criminal inmates stashed marijuana in a bathroom light fixture and used electrical wires to light it. (The sheriff’s office announced last month that it was investigating three suspected overdoses that occurred within the jail; Sheriff John Hinton did not reply to an interview request.)

A doctor told López he had a cracked rib but that the injury might have occurred a few years before, Babel wrote in an email. López believed that was absurd because he’d never been hit in the chest before then. She could still see the swelling when she visited a week after the incident.

Babel and López kept in touch by phone after ICE cut off social visitation in March in response to the pandemic. She remembered him as a sweet and mild-mannered man, as well as a devout Christian. Even before COVID-19, López told Babel he feared he would die in ICE custody. “I think it was very hard for him to aguantar, to survive those conditions,” she said.

On March 16, ICE informed López that he would not be released while his immigration appeal was pending. About a month later, two people were transferred into the general population at Morrow County from another Ohio jail without first being quarantined, according to a lawsuit filed on April 24 by the ACLU of Ohio. While it’s unclear how the virus entered the jail, one of the transferred men was the first person to test positive. He spent about 10 days in the shared dorm before being removed, the lawsuit states. Sheriff Hinton has admitted that detainees and staff weren’t wearing masks until the first person tested positive.

The jail’s publicly available booking records show that ICE transferred five people to Morrow County on April 21, after the first signs of infection. Boubou Sow, a pseudonym chosen by a Mauritanian asylum seeker, said he and others asked guards to stop bringing new people in only to be threatened with solitary confinement. Sow said in a call from the jail last week that people got sick one by one, but that guards didn’t believe them at first. “We knew from the beginning that if one of us got it,” Sow said, “we all would because it’s just one big room with recycled air.” One of the men booked-in on April 21 was hospitalized with COVID-19 last week before being sent back to the jail, Contractor, the immigrant advocate, confirmed after calling a local hospital.

When Babel picked López up at the jail on April 24, she said he seemed in good health. As they drove to his home wearing masks, he told Babel he planned to bring his daughter from Honduras and get back to work. López usually worked construction during the summer and at a chicken farm in the winter. “I think it’s just really ironic that if he had been on the outside we would have been calling him an essential worker and a hero,” Babel said.

On Saturday, one day before he died, López texted Babel to say that he had been released from the hospital. Babel told him she was sorry for the nightmare he’d been through. “Sí, pero ya pasó,” López replied. Yes, but it’s over.

“I’m not a doctor. I can’t say what he died of.” Babel said. “But his wife said to me—and I agree with her—that ultimately what killed him was those 18 months in detention.”