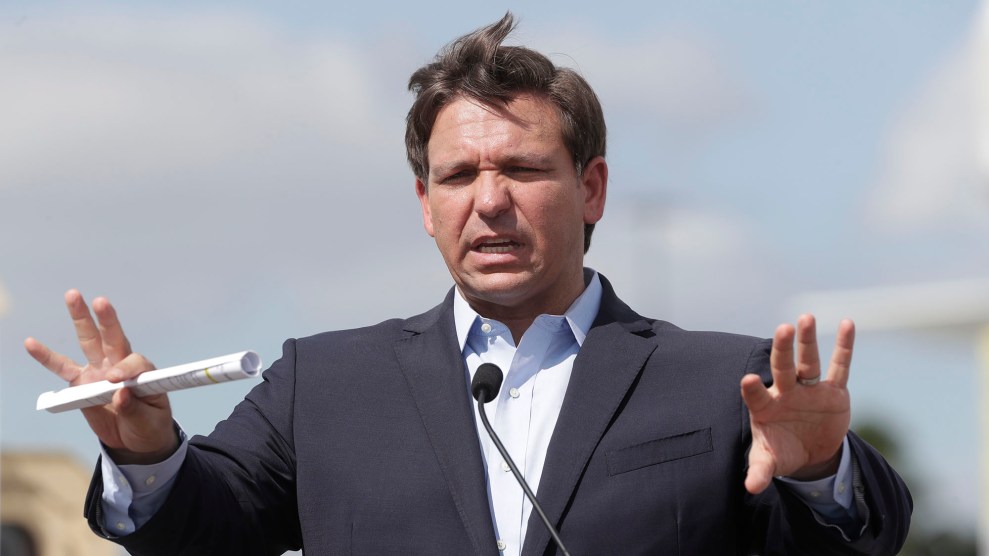 As President Trump and his aides sat on their hands for much of March and misled the public about the scope of the coronavirus pandemic, governors of the hardest-hit states were winning bipartisan praise. Joe Biden hailed Republicans Mike DeWine of Ohio and Charlie Baker of Massachusetts. “Help, I Think I’m in Love With Andrew Cuomo???” read a Jezebel headline, referring to the Democratic governor of New York whose Powerpoints (“reassuring and oddly endearing,” according to this website) have gripped the nation. Writing for the Wall Street Journal, Jeb Bush (a former governor himself) hailed the “competence” and “old-school, inspired leadership” of the nation’s governors. “[T]he contagion,” the New York Times reported, “has elevated a class of veteran political leaders whom Republican voters bypassed in the 2016 presidential race and Democratic voters shrugged off in 2020.”

But the crisis has also spotlighted another class of chief executive, and the results have been less than stellar. While some governors have risen to the occasion, Republicans in some of the nation’s Trumpiest states have followed the president’s course. These governors have been slow to respond to the threat, offered false bravado, and flailed desperately to pin the blame someplace else—usually, blue states. My colleague Becca Andrews recently wrote about the situation in Tennessee, where the state department of health recommended nurses wear diapers on their faces if they run out of face masks, even as Republican Gov. Bill Lee refused to issue a shelter-in-place order. (The state had more than 1,600 cases by Tuesday, but he still hasn’t ordered a lockdown.) Trump isn’t failing alone; a cohort of mini-Trumps is failing with him.

Some of these governors responded to the crisis with defiance—as if the virus were something that could be overcome through a show of community solidarity, rather than something that would use such displays to infect and kill. The Atlantic recently published a story on the “social-distancing culture war.” Look no further than Oklahoma. On March 14, as cities across the country were taking increasingly strict measures to combat the pandemic’s spread—and one week after the first positive COVID-19 test in his state— Oklahoma Gov. Kevin Stitt (an anti-vaxxer, by the way) tweeted a photo of himself eating out with his family at a crowded restaurant in Oklahoma City. The next day, he declared a state of emergency in Oklahoma—but continued to insist that eating out in these conditions was not just fine, but commendable. “The governor will continue to take his family out to dinner and to the grocery store without living in fear and encourages Oklahomans to do the same,” a spokesperson told CNN. As of Tuesday, Oklahoma has had at least 481 coronavirus cases and 17 deaths.

Like Stitt, West Virginia Gov. Jim Justice, a billionaire hotel owner and coal magnate, encouraged residents of his state to do exactly what public health experts said they should be steering clear of. West Virginia was the last state to report any cases of COVID-19, which President Trump attributed to Justice’s leadership. But Justice himself acknowledged on March 13 that the absence of positive tests was really a reflection of the state’s inability to test widely, rather than any sort of preventative measures. “Let’s be real, it has to be here—we just haven’t found it yet,” Justice said. His advice? “If you want to go to Bob Evans and eat, go to Bob Evans and eat,” Justice said. A few days later, West Virginia reported its first case—and Justice, belatedly, closed restaurants for dining.

Over the last week, Florida Gov. Ron DeSantis has taken increasingly stringent steps to restrict visitors to Florida. Last Tuesday, he announced that anyone who had traveled to the state from the New York City area over the past three weeks would have to go through a 14-day quarantine—and would be subject to jail time if they didn’t comply. On Friday, he extended the mandatory quarantine to visitors from Louisiana and implemented highway checkpoints on roads entering the state. It was DeSantis’s complaining that prompted Trump to consider placing New York, New Jersey, and Connecticut under mandatory quarantine. And DeSantis is trying to block “foreigners” from the cruise ship Zaandam being “dumped” on Florida—leaving 1,400 travelers temporarily adrift at sea.

DeSantis: We will accept any Floridians on board cruise ships pic.twitter.com/GSpi8aouCM

But DeSantis for weeks resisted calls to close beaches in the state, keeping crowded tourist hubs open during spring break. He allowed counties to keep their beaches open as late as last weekend. His failure to act likely played a role in worsening the outbreak in the state, and perhaps even exporting the virus to other parts of the country.

This shows the location data of phones that were on a Florida beach during Spring Break. It then shows where those phones traveled.

First thing you should note is the importance of social distancing. The second is how much data your phone gives off. pic.twitter.com/iokUX3qjeB

The number of cases in Florida more than doubled from Friday to Tuesday, up to 5,694. Only five states had more. On Monday, DeSantis finally issued a stay-at-home order—but only for South Florida. DeSantis said at the time that he was open to doing so—if Trump’s White House told him to. (On Wednesday, he finally did—but left exemptions for religious services.)

In Texas, where the Republican lieutenant governor suggested it was worth reopening business even if senior citizens like himself had to die, Gov. Greg Abbott likewise imposed a mandatory two-week quarantine on travelers flying in from the tri-state area, Louisiana, and the cities of Miami, Atlanta, Chicago, and Detroit. But the coronavirus is already in Texas, with more than 3,000 cases. There are reported cases in half the state’s counties, and roughly 87 percent of Texans live in areas where a stay-in-place order is in effect—but those are all a result of county and municipal decisions. He imposed a statewide stay-at-home order yesterday. The ban, though, makes exceptions for church services. Justice, too, has gone after out-of-state travelers, instructing state police to check in on homes that have cars with license plates from the tri-state area or Louisiana—a move he acknowledged might not be constitutional.

(Sending the police after visitors is not a strictly partisan phenomenon; Democratic Gov. Gina Raimondo of Rhode Island also instructed her state’s police force to enforce quarantines on tri-state drivers, though Rhode Island, at least, neighbors those states and has a more specific problem of city residents relocating to vacation homes there.)

In Texas and elsewhere, local authorities have tried to fill the vacuum left by state leaders, reprising familiar battles over local control. As Ron Brownstein observed on CNN, red-state cities such as Birmingham, Atlanta, Nashville, and Phoenix have issued stay-at-home orders that go much further than the guidelines pushed by their states’ governors. (Arizona Republican Gov. Doug Ducey, for instance, issued a statewide stay-in-place order but left an exception for golf courses.) And sometimes the state governments have pushed back. Greenville, South Carolina, announced late last week that it was reevaluating its stay-in-place orders after the state attorney general ruled it would have to instead comply with Gov. Henry McMaster’s less-burdensome rules. (South Carolina was up to 925 cases as of Tuesday.)

As the outbreak flared in nearby New Orleans and his own state’s numbers crept upward, Mississippi Gov. Tate Reeves initially rejected calls to close beaches there—even after Florida and Alabama closed theirs—and balked at implementing a stay-in-place order.

The sentiment was echoed elsewhere. “Y’all, we are not Louisiana, we are not New York State, we are not California,” Alabama Gov. Kay Ivey said on Thursday, when asked if the state would adopt a shelter-in-place policy. “Right now is not the time to order people to shelter in place.”

To judge by the actions of people like Ivey and DeSantis—and for a long time, Trump—the coronavirus is a blue-state contagion, a problem for other people to deal with in places you don’t live, and conversely, a problem that won’t require the same solutions where you live because you’re not those places. It’s a crisis that’s been bungled by, according to Trump, the “snake” Jay Inslee of Washington state (“a failed presidential candidate…a nasty person”), and “the woman in Michigan,” Gov. Gretchen Whitmer. They’re both Democrats. In this view of the world, cutting off travel and being stingy about tests and supplies is an appropriate political and logistical move that shifts blame and pain toward people who are politically expendable.

Of course, New York didn’t think it was New York either; that’s why the outbreak is as bad as it is. That’s the point. A prevailing theme of this pandemic has been that everyone thinks they’re special but no one actually is. As China reeled, the federal government had months to learn and prepare. Instead it just sort of…watched. Then, as the first American cities struggled to deal with the early clusters in the United States, other cities and states had still more time to learn and prepare. Instead, they kept the beaches and diners open, and watched. Each of these states is like a domino that thinks it won’t be the one to topple over, because it can’t see past what’s immediately in front of it. By the time it feels like it’s time to act, it’s probably too late.

Partisan blinders and false assurances from the White House might have obscured the full scope of the threat for a spell, but contagions, it turns out, don’t care if you voted Republican or Democrat.