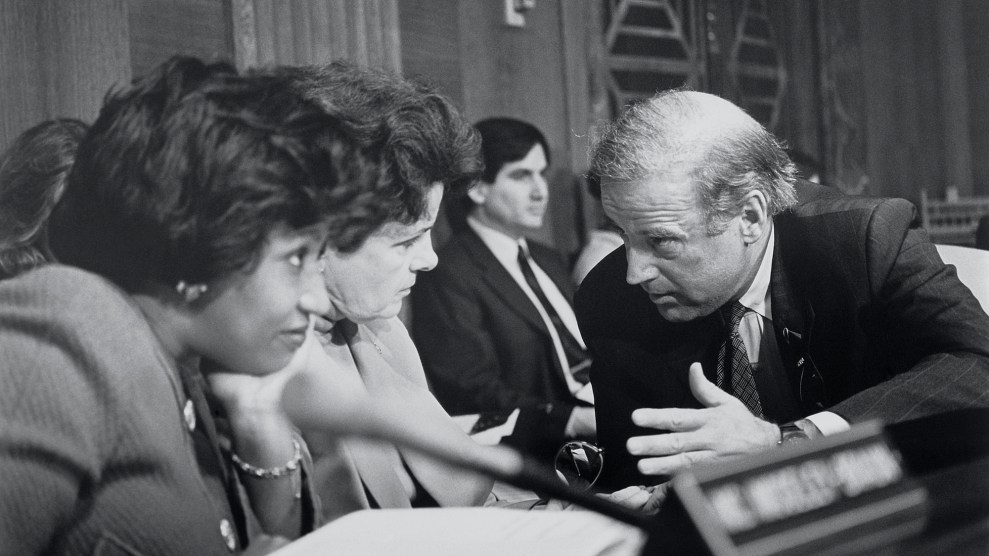 New evidence has emerged to support the sexual assault allegation against former Vice President Joe Biden, who was accused last month by a former staff assistant, Tara Reade, of sexually assaulting her when he was a senator in 1993. Today, Business Insider reported that Reade’s former next-door neighbor recalls that Reade described an incident in detail in the mid-1990s.

According to the Business Insider report, written by Rich McHugh, a former NBC News producer who worked with Ronan Farrow on his investigation of Harvey Weinstein, Lynda LaCasse says Reade told her about the alleged assault one night while they were talking:

LaCasse told Insider that in 1995 or 1996, Reade told her she had been assaulted by Biden. “I remember her saying, here was this person that she was working for and she idolized him,” LaCasse said. “And he kind of put her up against a wall. And he put his hand up her skirt and he put his fingers inside her. She felt like she was assaulted, and she really didn’t feel there was anything she could do.”

LaCasse said that she remembers Reade getting emotional as she told the story. “She was crying,” she said. “She was upset. And the more she talked about it, the more she started crying. I remember saying that she needed to file a police report.” LaCasse said she does not recall whether Reade supplied any other details, like the location of the alleged assault or anything Biden may have said.

LaCasse told McHugh she is speaking now because of the scrutiny Reade has faced since she came forward. Last year, Reade was one of eight women who publicly accused Biden of having kissed or touched them in ways that made them uncomfortable. (In response to the stories, Biden acknowledged that his “gestures of support” made some people uncomfortable and promised to change his behavior.) Reade told a Nevada newspaper that he used to touch her shoulder and neck, and that she was asked to serve drinks at an event because Biden liked her legs. She said that she reported the alleged harassment, but not assault, to her supervisors.

But those supervisors, as well as other Biden staffers at the time, have told reporters they have no memory of Reade’s complaints, and media outlets have been unable to locate the complaint Reade says she filed with the Senate. (If it exists, that complaint might be stored in Biden’s closed Senate files at the University of Delaware. The university has said it will not open those records until two years after Biden “retires from public life.”)

The Biden campaign has denied the allegation, referring Business Insider to a statement issued earlier this month. “Women have a right to tell their story, and reporters have an obligation to rigorously vet those claims,” deputy Biden campaign manager Kate Bedingfield said. “We encourage them to do so, because these accusations are false.”

LaCasse is the second person who says Reade detailed the alleged sexual assault in the mid-1990s. The other is an unnamed friend interviewed by journalists from outlets including the New York Times and the Washington Post. (Reade’s brother and another friend also told reporters that Reade told them “over the years about a traumatic sexual incident,” according to the New York Times.)

McHugh also spoke to Lorraine Sanchez, who worked with Reade after she left Biden’s office. Sanchez recalled Reade saying “she had been sexually harassed by her former boss while she was in DC…and as a result of her voicing her concerns to her supervisors, she was let go, fired.” She could not remember if Reade named Biden at the time.

The Business Insider story follows the discovery of another new detail that supports Reade’s account. Last Friday, The Intercept reported that it had located an August 1993 clip of “Larry King Live,” in which an anonymous woman called to ask for advice on behalf of her daughter, who had experienced “problems” working in a senator’s office. “In other words, she had a story to tell but, out of respect for the person she worked for, she didn’t tell it?” King asked. “That’s true,” the caller replied. Reade identified the caller as her mother, Jeanette Altimus, who died in 2016.

Video👇🏻@ReadeAlexandra — is this your Mom’s voice? https://t.co/ospBhlKSvb pic.twitter.com/r5WsXJ2vQb

It remains to be seen whether Reade’s story will significantly shake up the 2020 presidential race or change public opinion about Biden. Some sexual assault survivor advocates have said that the allegation complicates their wish to replace President Donald Trump, who has been accused of sexual assault and harassment by multiple women. The presumptive Democratic nominee has yet to personally address the allegation, and his campaign did not respond to Business Insider‘s request for an interview.