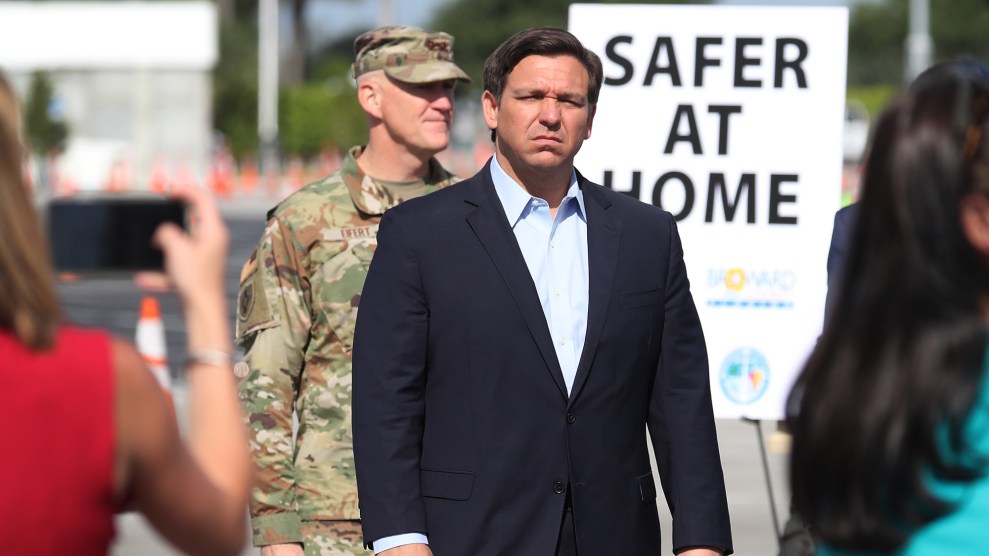 After weeks of resistance, the Republican governors of both Florida and Georgia finally acceded to calls for shelter-in-place orders this week. But with notable exceptions. These include Georgia beaches and religious services just before the busiest week of church attendance of the year, with Palm Sunday tomorrow and Easter coming up on April 12.

Florida Gov. Ron DeSantis classified religious services as “essential business” that could continue despite a stay-at-home order that went into effect on Friday. DeSantis signed a second order that overrode local orders, including actions already taken by local officials to shut down in-person religious services. Earlier this week, Tampa pastor Rodney Howard-Browne was arrested and charged with two misdemeanors for holding services at his megachurch last weekend in violation of local restrictions. But DeSantis’ decision to override local restrictions appeared mainly aimed at keeping church doors open. “We absolutely ask them to abide by social distancing guidelines,” DeSantis said. “But in times like this, the service they’re performing is going to be very important for people.”

Georgia’s governor, Brian Kemp, issued a stay-at-home order that went into effect on Friday evening. His order allows religious services as long as people stay six feet apart when worshipping. But given how how crowded services may be, and the constraints of church pews, it seems impossible to maintain at all times. Moreover, the six-feet-apart guidelines are more of an estimate, and scientists say that for indoor encounters, six feet of separation is a minimum.

Like DeSantis, Kemp also chose to override local coronavirus orders in his statewide shelter-in-place order, with the effect of invalidating restrictions from counties and municipalities that went further than the governor’s order. The most immediate effect was that the order effectively re-opened the state’s beaches that had been shuttered by local officials. In response, Tybee Island Mayor Shirley Sessions, who had closed one of Georgia’s most popular beaches, blasted Kemp’s order. “As the Pentagon ordered 100,000 body bags to store the corpses of Americans killed by the Coronavirus, Governor Brian Kemp dictated that Georgia beaches must reopen, and declared any decision makers who refused to follow these orders would face prison and/or fines,” Sessions said in the statement. She told the Associated Press that she did not have the personnel to enforce social distancing on the now-open beaches. Kemp’s spokesman said that Georgia’s state patrol would monitor the beaches to enforce the six-foot rule.

But religious services present a more immediate concern, since services are indoors and last more than an hour. Church services have already worsened outbreaks. In Georgia, the state’s public health commissioner has called attention to the fact that outbreaks in three cities have all been linked to large church services and called for houses of worship to offer online services.

Florida and Georgia are not alone in allowing religious worship to continue in person. Earlier this week, Texas Gov. Greg Abbott (R) issued what amounted to a stay-at-home order, though he rejected the label, but exempted religious services. In Louisiana, by contrast, a hotspot for the pandemic, a pastor faces misdemeanor charges for holding services for more than 1,200 congregants in violation of the governor’s order against such gatherings.

Most religious leaders are likely to move their services online, or at least into their parking lots during this crisis. But some appear determined to hold indoor services despite the serious risks to public health. Ohio also exempted church services and one Cincinnati megachurch has continued to hold services. New York did not deem religious services non-essential but also discouraged in-person services.

“Those that are continuing to have services are most likely to be those who subscribe to prosperity gospel beliefs that claim God will protect them from adversity,” Scott Thumma, an expert on religion at Hartford Seminary, told the Los Angeles Times, “or are pitting their claims of religious freedom against the welfare of those they would like to evangelize.”