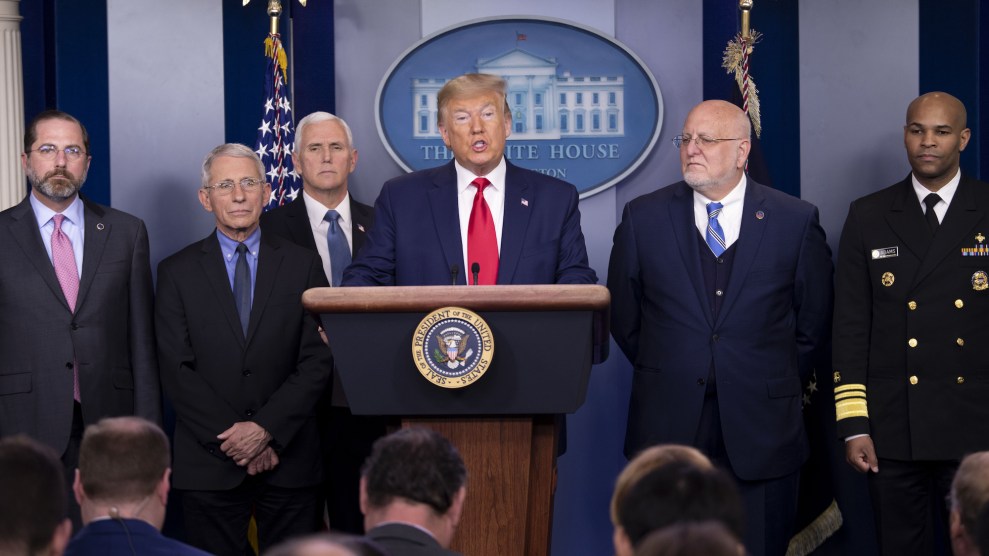 The Trump administration’s response to the coronavirus epidemic has been haphazard at best. The administration botched the handling of infected passengers on the cruise ship docked in Japan. A whistleblower has alleged that dozens of staffers from the Department of Health and Human Services who received the first Americans returning from Wuhan, China, the epicenter of the outbreak, were not equipped with proper protective gear or training. Officials have tried to downplay the risk of the epidemic even as new cases are reported in places like California, Washington State, and Chicago that aren’t linked to foreign travel.

Behind the scenes, according to the Washington Post, the administration has been scrambling to contain the damage. On Wednesday night, Trump made a last minute decision to tap Vice President Mike Pence to lead the White House virus task force. And Pence in turn appointed Debbie Birx, who heads the State Department’s US Global AIDS Coordinator and is also a doctor, to help with the response. But Birx should not be confused as the virus “czar.”

While other presidents, notably Barack Obama, have brought in outsiders with expertise to help coordinate government public health efforts—Obama tapped Ron Klain as his “Ebola czar”—Trump refused to delegate that sort of authority to someone outside the government or to a single individual well-versed in public health. Why? Because more than anything, Trump demands blind loyalty from those around him, the reason he has recently purged the White House of many staffers he believed weren’t sufficiently devoted to him. That singular focus on loyalty as opposed to expertise drove Trump’s decision to put Pence in charge. The Washington Post reports:

Trump did not, however, name a single “czar,” as some previous administrations have done during health emergencies. The president decided against that option after worrying that bringing in a person from outside the administration might be seen as a failure — and wondering whether such a person would be loyal to him, according to those familiar with the debate.

Such calculations are the sorts of thing that allowed the coronavirus to spread in China. Nonetheless, Trump has continued to insist that everything his administration is doing is perfect.  “Our country is prepared for any circumstance,” Trump said at a Saturday press conference. “We hope it’s not going to be a major circumstance, it’ll be a smaller circumstance. But whatever the circumstances, we’re prepared.”