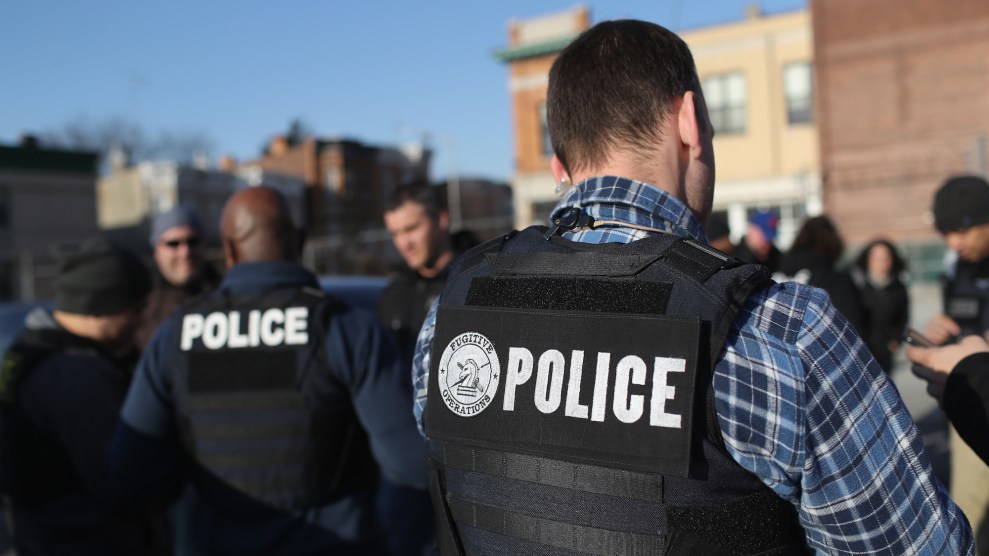 Two seemingly contradictory facts are both true: First, in the midst of a pandemic, Immigration and Customs Enforcement officers detained a Honduran immigrant at a Pennsylvania hospital on Thursday. Second, it remains safe for immigrants to seek medical treatment.

These two facts collided on Thursday, when the news of a hospital arrest appeared in a tweet from Pennsylvania immigration attorney Juliette Gomez and quickly went viral.

Image of ICE officers arresting my client at the hospital pic.twitter.com/y7ZdDyz6iT

What exactly occurred was hard to discern from the tweet. On Twitter, some users incorrectly concluded that ICE was targeting hospitals as the novel coronavirus spread across the country.

But a longstanding ICE policy generally prohibits ICE officers from taking people into custody at hospitals. “Exceptions to this policy are extremely rare and are mostly limited to imminent public safety threats,” Sarah Pierce, a policy analyst at the nonpartisan Migration Policy Institute, said. “Immigrants should absolutely feel safe to seek medical treatment.”

In an initial statement, ICE said that it was investigating the tweet, adding, “It is critical during this time of global pandemic, that everyone know that ICE does not conduct operations at medical facilities, except under extraordinary circumstances. Individuals should continue to seek care for medical conditions.” ICE officials confirmed in a follow up statement that officers detained a man at a hospital after initially intending to take him into custody at a courthouse.

I caught up with Gomez and an ICE spokesman to find out about the events that led up to the moment in the hospital.

On Thursday, Gomez said, he was scheduled to be sentenced in federal court for reentering the country without authorization. ICE said in a statement that officers planned to take him into custody after the sentencing hearing in Scranton, Pennsylvania, noting that it had informed the US Attorney’s office about the plan. (The Justice Department handles criminal charges, while ICE, a part of the Department of Homeland Security, places people in civil detention so that it can deport them.)

At the hearing, a Justice Department attorney asked Gomez’s public defender, Elliot Smith, why his and Gomez’s client had brought his family with him, according to Gomez. He was going to be detained by ICE afterwards, the US attorney said, and seeing that happen could be traumatizing for his children.

Gomez’s client was aware of how traumatic this situation could be. He had been detained by ICE in May after dropping his 14-year-old daughter off at school, she said. His 14-year-old was so traumatized by the event, she ended up missing school due to the mental health problems it caused. He had initially gotten on ICE’s radar, Gomez explained, after being incorrectly told to file an asylum application by someone practicing law without a license. After being detained by ICE in May, Gomez’s client spent roughly six months in ICE detention before becoming eligible to be released.

The news that he was going to be arrested after the Thursday hearing was a surprise to Smith and Gomez’s client, who didn’t realize ICE officers would be there to detain him that day. The public defender asked the judge to provide Gomez’s client with the chance to say goodbye to his family since he wouldn’t be able to do so after he was taken into custody. The judge allowed him to before the hearing began. While he was saying goodbye, the man, whom Gomez said sleeps wearing a ventilator because of respiratory problems, had difficulty breathing, either as the result of a panic attack or because of the medical issues for which he’s been hospitalized in recent weeks.

Before interacting with the ICE officers at the courthouse, he was taken to a hospital in an ambulance. ICE followed him there and then stood watch outside his door, according to Gomez. As soon as he was discharged, but still in his hospital room, he was handcuffed by two officers. Gomez said the photo she posted was taken by her client’s wife as officers escorted him to the bathroom.

When we spoke on Thursday night, Gomez said her client was being detained without his ventilator. She was particularly worried that a man with a respiratory problems is now locked up, as people are contracting COVID-19. The fact that he’d previously been released from ICE custody should be evidence that he is not a flight risk. Instead, she said, he wants to be deported as quickly as possible so that his family can join him in Honduras. But first, he will have to remain in jail for a new sentencing hearing that had been rescheduled on Thursday, she said, and it’s unclear when that will happen.

After his hospital arrest, Gomez asked ICE to release her client on an order of supervision so that he can leave the country with his family. ICE can honor that request, or it can keep him in detention then deport him on his own. After describing the charity her client had created to send food and clothes to children in need in Honduras, Gomez concluded, “This is a genuinely good dude.”