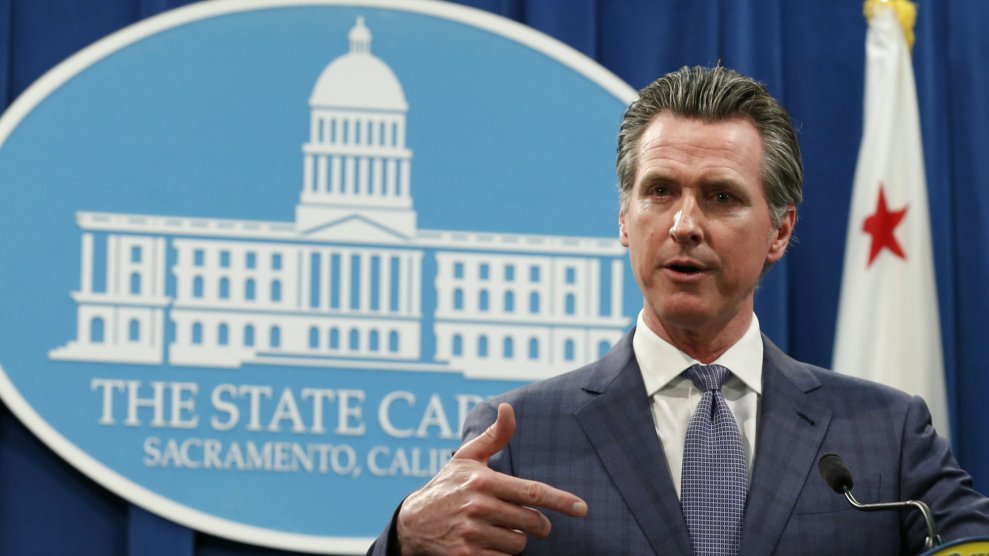 On Wednesday, after the state’s first coronavirus death in Placer County, California Gov. Gavin Newsom announced that the state would be formalizing its action plan by declaring a state of emergency. “The State of California is deploying every level of government to help identify cases and slow the spread of this coronavirus,” Newsom said. “This emergency proclamation will help the state further prepare our communities and our health care system in the event it spreads more broadly.”

Worldwide, more than 95,000 infections have been reported and more than 3,000 people have died—including 11 people in the US, where people infected with COVID-19 are continuing to appear. To battle the infectious disease—which was first spotted in Wuhan, China, last December—state and local governments have begun declaring states of emergency. Newsom joined Washington Gov. Jay Inslee and Florida’s Gov. Ron DeSantis in making the move. Newsom and Inslee are both Democrats, and DeSantis is a Republican.

The state declarations of emergency are fundamentally different from federal disaster declarations, which typically happen after a hurricane or flood event. Those are the responsibility of the president and trigger the release of federal funds. The governors’ emergency declarations enable states to mobilize all levels of their governments to combat the virus, which includes providing public health and financial assistance to city and county governments, and protecting consumers from price gouging on items like hand sanitizer and face masks (which should only be used by health care professionals treating patients, or if you’re actually sick).

“This is a time to take common-sense, proactive measures to ensure the health and safety of those who live in Washington state.”

Strong leadership and actions by local governments will be especially important in the event that the disease continues to spread unchecked. “It’s complete chaos,” an anonymous Trump administration official told the Washington Post about the federal government’s coronavirus response. “Everyone is just trying to get a handle on what the [expletive] is going on.” The handling of the situation by the White House has been criticized as confusing and potentially damaging as the Trump administration announced on Thursday that it will not be able to meet its promise of having 1 million coronavirus tests available by the end of the week.

“This is a time to take common-sense, proactive measures to ensure the health and safety of those who live in Washington state,” Inslee said last month. A Snohomish County man who had recently traveled to Wuhan, China, became the first US coronavirus case to appear in the state. He is now fully recovered. Ten of the 11 US deaths are in Washington state, with six of them occurring at a long-term care facility in the Seattle area. “Washingtonians can be assured we’ve taken this threat seriously and have been working in collaboration with our health care partners to develop plans and procedures to prepare for what could likely be a world-wide pandemic,” Inslee said.

Across the country, Ron DeSantis declared a public health emergency in Florida last Sunday after two people tested positive for coronavirus. “I direct the State Health Officer to follow the guidelines established by the CDC in establishing protocols to control the spread of COVID-19 and educate the public on prevention,” he said. There have been no coronavirus deaths in the state as of Thursday.

States may have to rely on their own governments for a robust coronavirus response, as opposed to the federal government. While no other states have declared states of emergency, many others are preparing for the emergence of the disease. On Wednesday, Massachusetts Gov. Charlie Baker assured residents that coronavirus test kits were on their way to the state, but public health officials cautioned against the rush to test anyone who felt ill. Marc Lipsitch, the director of the Center for Communicable Disease Dynamics at Harvard said that widespread testing, especially during the height of flu season, could “bring the health system crashing down.”

The president, who has referred to coronavirus as the “coronaflu,” has blamed former President Barack Obama for the government’s response, and more alarmingly, downplayed the severity of the disease. After the World Health Organization announced on Tuesday that the death rate is at 3.4 percent, Trump told Fox News’ Sean Hannity that the number was false. He based this assertion on a “hunch.”

“I think the 3.4 percent is really a false number—and this is just my hunch—but based on a lot of conversations with a lot of people that do this because a lot of people will have this and it’s very mild,” he said. “They’ll get better very rapidly, they don’t even see a doctor, they don’t even call a doctor. You never hear about those people.” State governors may not agree.