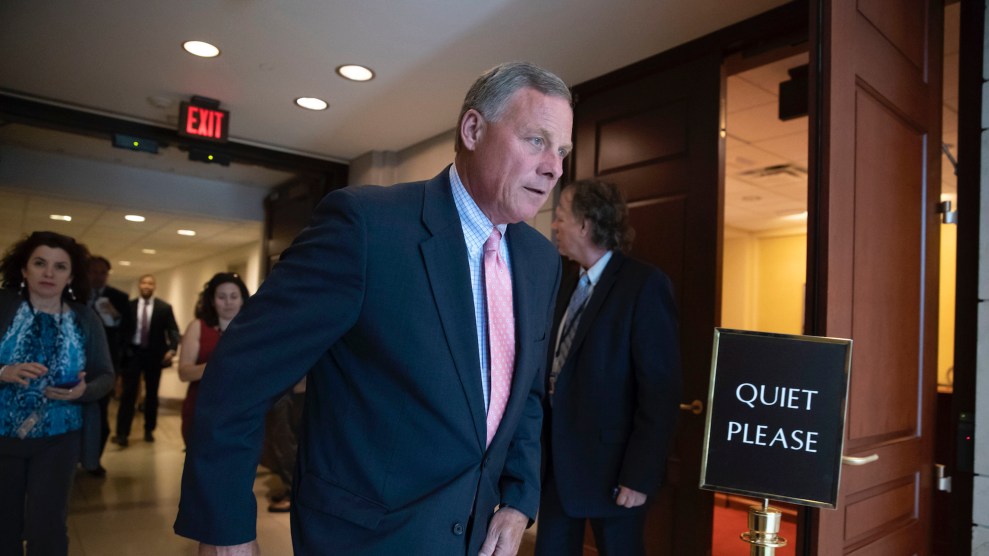 Sen. Richard Burr (R-N.C.) denied he had done anything wrong by dumping stocks days before the market crashed due to the coronavirus pandemic. On Thursday, Burr and two other Republican senators were revealed to have sold millions of dollars in stock in late January and early February, around the time members of Congress began receiving in-depth briefings on the potentially cataclysmic effects of the outbreak. Burr, who chairs the Senate Intelligence Committee, sold between $628,000 and $1.7 million in publicly traded stocks—and didn’t buy any new ones—starting on February 13.

Under the 2012 STOCK Act, members of Congress are held to the same insider-trading standards as corporate executives—they are prohibited from making any trades based on their information that isn’t publicly available—and this could potentially apply to Burr, whose committee received classified briefings on the spread of the coronavirus starting in early February. On Thursday night, after Open Secrets and ProPublica reported on Burr’s stock sales, Fox News host Tucker Carlson called for the senator to resign and face prosecution.

“There is no greater moral crime than betraying your country in a time of crisis, and that appears to be what happened,” Carlson told his viewers.

Tucker Carlson calls for Senator Burr to resign and await prosecution for insider trading if he cannot provide a reasonable explanation for his actions. He goes on to say it appears that Senator Burr betrayed his country in a time of crisis pic.twitter.com/q7yJa5wjuA

Burr’s Senate office initially appeared to blow off the accusations. It did not respond to requests for comment from Mother Jones on Thursday evening, and Burr’s spokesperson simply emailed “lol” in reply to questions from NPR. But by Friday morning, Burr changed his tone, defending his sales as proper—he says he made the decision to sell the shares based on what he was seeing on CNBC, not any inside information—and called himself for an investigation by the Senate Ethics Committee in the spirit of “full transparency.”

My statement in response to reports about recent financial disclosures: pic.twitter.com/J4kye5a4ok

Burr’s suggested course of action is a far cry from what Carlson and others are suggesting. Senate Ethics Committee investigations are conducted in secret and can be concluded at any time if the target of the investigation steps down. They are also notoriously slow, taking months or even years to meander to completion.

On Thursday, the Daily Beast also reported that Sen. Kelly Loeffler (R-Ga.) and her husband—Jeffrey C. Sprecher, who is chair of the New York Stock Exchange—may have made improper trades. Starting on January 24, the day the committee she chairs received a briefing on the coronavirus, Loeffler and Sprecher reported they made 24 stock sales, worth millions. The couple also made only two purchases, including buying shares in Citrix, a company that specializes in telework software. Loeffler denied she had done anything wrong, saying her investment decisions are made by “third-party advisers.”

Essentially, the sales and purchases are a coincidence, Loeffler is arguing.

Oklahoma Republican James Inhofe was also cited by the New York Times on Thursday for his sale of as much as $400,000 in stock on January 27. On Friday, he denied having attended the January 24 briefing on the coronavirus and said he had previously instructed his financial advisor to sell off all of his stocks.

Democratic Sen. Dianne Feinstein and her husband also reported a large stock sale in late January, shedding between $500,000 and $1 million of shares in a cancer therapy research company. Feinstein said her assets are in a blind trust, which gives her no control over their sale, and that she did not attend the January 24 briefing. Feinstein’s stock sale occurred on the day the company had hit what was then its lowest share price of the year.