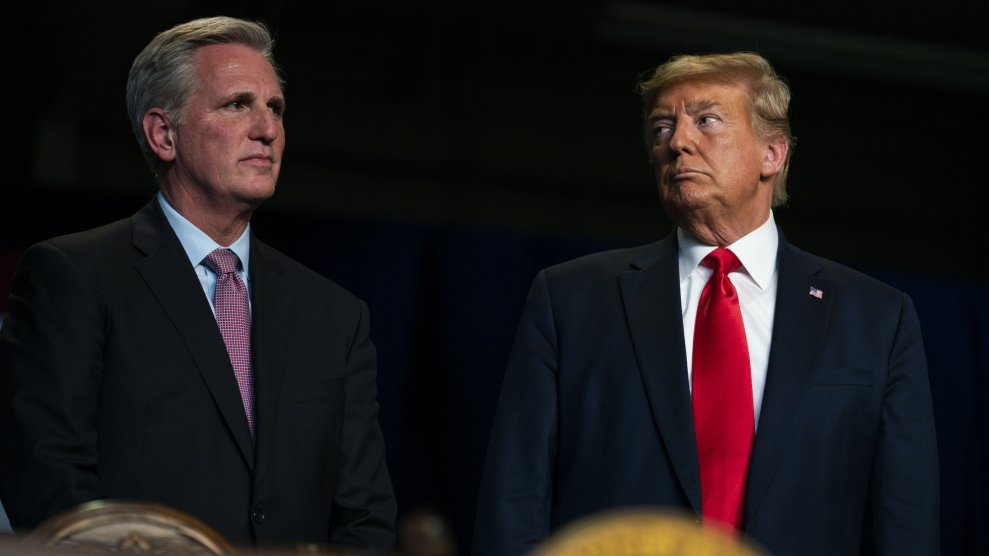 At a Thursday morning press conference, McCarthy outlined a “couple major problems” that he has with the bill, but he seemed to object most strenuously to the sick leave measures, which would guarantee paid sick time for all employees, including contractors and gig economy workers. McCarthy’s concerns were partly technical in nature—he argued that the program, as outlined in the legislation, would be difficult to implement. But he also took aim at the very idea of requiring businesses to provide paid sick leave after the coronavirus emergency has passed. The Democratic bill, he complained, “forces permanent paid sick leave for all business without exemptions and no sunsets.”

Under the bill Pelosi introduced on Wednesday, federal workers with COVID-19, or caring for family members with the virus, would be guaranteed to receive two-thirds of their wages for up to three months—a temporary benefit which would expire in January of 2021. But the bill also establishes a permanent paid sick leave requirement for private businesses, allowing workers to accrue at least seven days of paid sick leave, with an additional 14 days available if there’s a public health emergency, such as the current coronavirus pandemic. According to Roll Call, “businesses with 50 or fewer workers would be reimbursed for the cost of emergency sick leave.”

Paid sick leave has long been a top priority for progressive lawmakers. Now, because of the coronavirus pandemic, it has quickly gained momentum in Washington, DC. But McCarthy’s comments on Thursday indicate that it’s one of the main reasons GOP lawmakers and the Trump administration will fight Pelosi’s bill. McCarthy said that he spoke with officials at the White House, who said that they are also opposed to the House legislation. “We should not just take a rush because there’s a bill,” McCarthy said, adding that he thinks the GOP can strike a bipartisan deal with House Democrats in “24-to-48 hours.”

The Washington Post reported earlier this week that the White House had received calls from energy industry allies “privately warning against the administration supporting any sweeping paid sick leave policy.”

Despite the concerns from the GOP and the White House, Pelosi said the House will still vote on the package on Thursday.