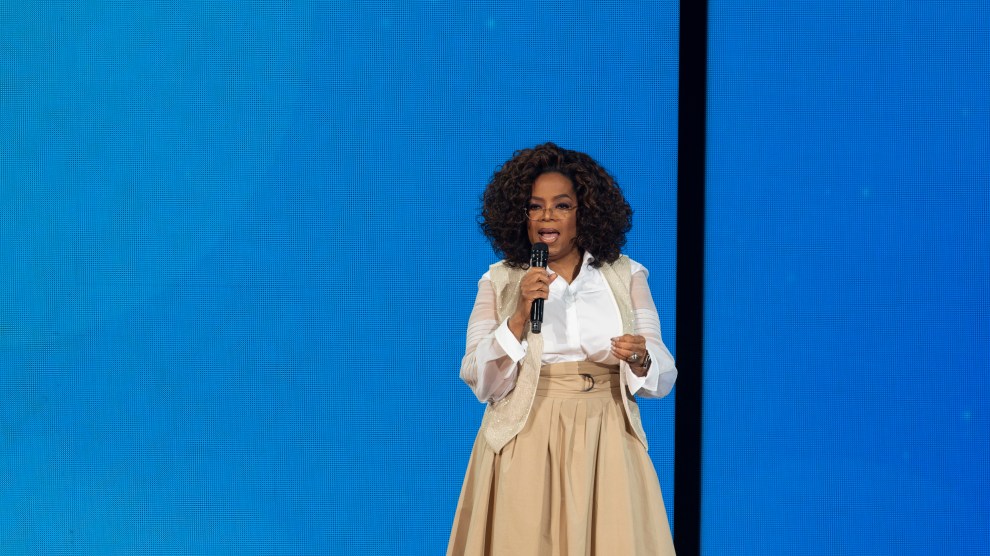 Seemingly out of nowhere on Tuesday night, an outlandish hoax about Oprah Winfrey getting arrested and Tom Hanks’ coronavirus diagnosis went massively viral only to be debunked by Winfrey herself—all in the period of time when many Americans were asleep.

“Just got a phone call that my name is trending. And being trolled for some awful FAKE thing. It’s NOT TRUE. Haven’t been raided, or arrested. Just sanitizing and self distancing with the rest of the world. Stay safe everybody,” Winfrey tweeted at 1:40am Eastern time.

She was responding to baseless claims that she had been arrested in a police raid for running a child sex trafficking ring that went viral and started trending on Twitter. The story had seemingly materialized out of thin air. No authoritative sources or legitimate outlets reported on it, but it still caught traction, confusing most people who saw it.

“where is this oprah news coming from? a facebook post? is everyone this bored inside rn? is this real?” tweeted Hasan Piker, a leftist political streamer and influencer. He was asking the same questions that a lot of people had.

It was not real. The answers to his other questions are:

It all seemed to begin late on Monday night when, according to YouTube video metadata, a middling poster who frequently uploads outlandish and bizarre video hoaxes that usually get little to no attention uploaded two clips. One appeared to be a recorded livestream of him from earlier in the day, in which he claimed he was near where Winfrey had just been arrested in a police raid. Another purported to be footage of the raid.

“tom hanks is apart of it too.”

That “footage” was completely bogus, and appeared to just be a video of unrelated police action at a house that did not appear to be Winfrey’s, or even the kind of house one would expect the billionaire talk show mogul to call home. Regardless, the video and the personal webpage that the YouTuber had posted it on started circulating on QAnon Facebook groups and other fringe right message boards, accruing thousands of likes and shares within hours, according to analytics recorded by Facebook’s own CrowdTangle app.

The theory was particularly attractive to QAnon groups who already believe that liberal and Hollywood elites are running secret pedophile rings and that mass arrests of the perpetrators are imminent. Winfrey has been an occasional but recurring subject of posts pushing that false conspiracy; at least one other post about Winfrey trafficking children popped up on a MAGA Twitter account in November.

The Winfrey rumor continued to bounce around Facebook and 4chan posts for the rest late Tuesday morning and early afternoon, before finally hitting Twitter. There, it began to catch mainstream attention when a user with just over 4,000 followers posted a video of the fake footage and ran with the baseless theory, tacking on two other Hollywood current events stories, including one involving movie producer and convicted rapist Harvey Weinstein: “So they raided Oprah Winfrey’s house and found out she’s running a sex ring with Weinstein and Weinstein is snitching on everybody to get less time. And tom hanks is apart of it too so he’s using the corona virus as an excuse to not come back from Australia?”

That tweet garnered over five thousand retweets and over 20 thousand likes, likely galvanizing others to post about the hoax. Those messages drove it up Twitter’s trending section, where in the evening it was finally debunked by journalists, discerning Twitter users, and Winfrey herself.

When asked for comment about its role in spreading the hoax, Twitter declined to comment. YouTube didn’t comment directly on the matter, but pointed to past work on reducing the spread of misinformation by downranking and demonetizing certain types of videos, even when it doesn’t outright delete them.

In this case, YouTube’s strategy might have helped—both videos received only roughly 50,000 views each, a significant, but not extremely viral amount. But the incident exposes how simply limiting misinformation often isn’t enough to stop it. Even if a hoax is stemmed on YouTube, there’s nothing to keep it from going viral on Facebook or Twitter.

Let that be your Aha Moment for the day.