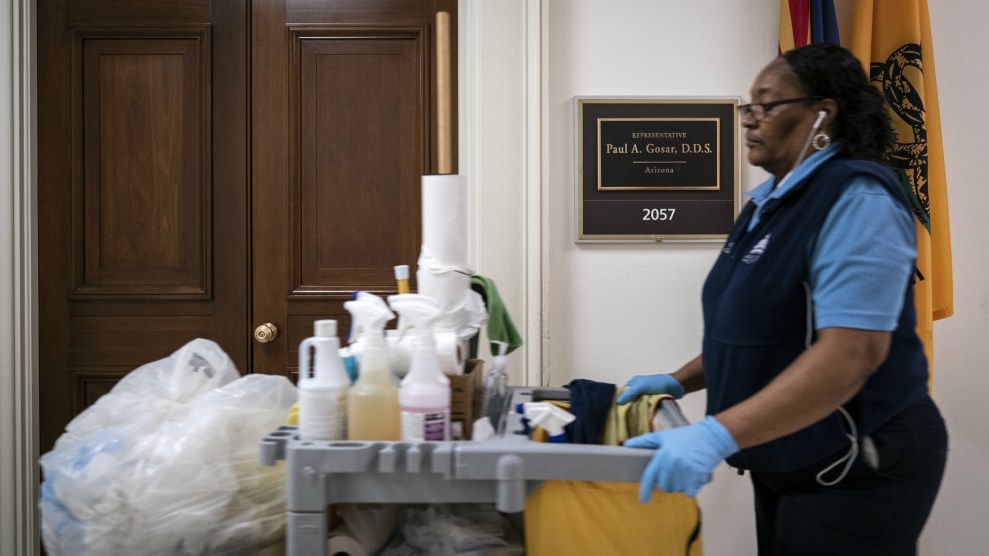 A federal worker outside the closed Capitol Hill office of Rep. Paul Gosar, who placed himself in self-quarantine.Drew Angerer/Getty Images

The Trump administration has yet to issue clear guidance to federal employees nationwide on whether they can work at home as the coronavirus pandemic escalates.

The result has been an ad hoc mix of policies that varies by agency and has left many workers across the country with conflicting instructions about when and how they should report to their offices and if they can telework. The civilian federal workforce consists of about 2 million people, not counting the United States Postal Service, with about 15% based in the Washington, D.C., area.

On Sunday night, the White House issued new, stronger guidance for federal employees in the Washington region, asking agencies to offer “maximum telework flexibilities” to all eligible employees and “use all existing authorities” to offer telework to other employees. Still, the new guidance leaves many details to be determined by individual agency heads, and it does not apply to the vast majority of federal workers.

The White House issued guidance to federal agencies Saturday recommending “only mission-critical travel” by federal workers. The guidance left it up to individual agencies to determine what meets that threshold.

Public health experts are unified in their message: Americans need to stay at home as much as possible to slow the spread of the disease and lessen the burden on the country’s health care system. At a White House press briefing Sunday, Vice President Mike Pence, who heads the administration’s coronavirus task force, said that officials had no higher priority than protecting the health of Americans, but he did not mention federal workers. Earlier on Sunday, Dr. Anthony Fauci, director of the National Institute of Allergy and Infectious Diseases, pleaded with Americans to “hunker down.”

On Sunday evening, the Centers for Disease Control and Prevention recommended an eight-week pause in holding mass gatherings of more than 50 people.

Most of the federal workforce is still subject to White House guidance issued on Thursday, encouraging agencies to “maximize telework flexibilities” for workers at higher risk of coronavirus complications, including older adults and people with some serious chronic health conditions and special populations like pregnant women. The White House also encouraged agencies to consider extending telework in response to community spread of the virus and local school closures.

Interviews with more than a half-dozen federal employees show frustration with the gap between what public health experts are recommending and the policies set by top administration officials. Federal employees are complaining that leaders at their agencies have not instituted broad policies to encourage healthy people to work from home to avoid contracting the virus and passing it to more vulnerable family, friends, or strangers.

President Donald Trump declared a national emergency last week to unleash federal funds to combat the coronavirus, though he has repeatedly shrugged off the threat posed by the pandemic.

The Office of Personnel Management and a spokeswoman for Pence did not respond to requests for comment on the gaps in guidance or on whether the government is tracking how many federal employees have been diagnosed with the coronavirus, tested presumptive positive or self-quarantining after showing symptoms.

At the Department of Justice—which has over 100,000 employees—employees received messages on Wednesday and Friday alerting them to an unnamed employee with coronavirus symptoms and another who tested presumptive positive, according to internal emails seen by ProPublica. Several DOJ officials said they were frustrated with what they viewed as an inadequate response by their superiors.

In the case of the employee who exhibited symptoms, DOJ responded by sanitizing the building where the person worked, and it said staff who work in the area could return to the office by 8:30 a.m. the next day, Thursday. The email said supervisors “can consider” individual telework requests.

“People are just beside themselves,” said one DOJ official, who, like others, requested anonymity because they were not authorized to speak to the press. “Their approach was just to clean a couple floors and they thought that somehow addressed the problem.”

The Justice Department did not respond to a request for comment. Late on Sunday, following the White House’s new guidance for Washington workers, Deputy Attorney General Jeffrey Rosen sent a memo to department heads, seen by ProPublica, directing them to “move to a posture of maximum telework” in the Washington region until further notice.

A letter sent on Friday from a DOJ gender equality group to Attorney General William Barr and OPM Director Dale Cabaniss said DOJ and other agencies had until that point allowed telework only when an employee was at a high risk of infection, even if their family members had serious underlying health issues. It urged senior leaders to immediately permit unrestricted telework for those who qualify and to allow contractors to telework as much as possible.

“Your response to this outbreak signals to federal workers that the spread of the disease, our health, and the health of our families are not priorities,” the letter said.

In one DOJ staff meeting on Thursday, career lawyers asked their boss, a Trump political appointee, why there had been no guidance on telework for at-risk populations or parents of children affected by school closures. The meeting details were shared with ProPublica by a second DOJ official who attended.

“A lot of people expressed frustrations,” the official said. But the Trump appointee “had no answers” and merely repeated that he would take their concerns to higher-ups and that he had no authority to do anything, the official said.

One DOJ senior manager told his employees last week that his division could not discuss official coronavirus response policies without permission from the agency’s top levels, the DOJ official told ProPublica. Individual managers were left to make their own decisions on employee telework.

One contractor who works in a DOJ building said he has received no guidance from any level of the department, except for hand-washing advisories in bathrooms and generic coronavirus information sheets posted by elevators.

Three State Department employees said in interviews this weekend there is no overall remote working policy, although they have received some guidance about limiting travel and other practices. In that vacuum, bureaus have determined who can telework individually.

In one office, approximately half the staff was told to work from home in the coming week, an official said. In another State Department bureau, a meeting attendee came down with fever and a sore throat and others were given the option of teleworking with manager approval. Overall, employees felt that information was being “siloed,” one official said.

A State Department spokesperson said the agency has authorized managers to implement telework and other flexible arrangements “as appropriate,” and said some sections “have already begun rotational and telework schedules.”

At the Interior Department, employees at the Bureau of Land Management were told in a Friday email from acting director William Perry Pendley to be “telework ready,” but an official said they have not received blanket telework approval. The Interior Department issued an employee guide on Wednesday, restating department policies on leave and telework. It acknowledges that the coronavirus pandemic would justify lifting certain telework restrictions but did not say if those restrictions had been lifted or not.

As a result, one Interior Department official told ProPublica, managers within the agency have adopted ad hoc responses—with some work travel still on the schedule in the coming days.

A Department of Interior spokesperson said the agency is following guidance from OPM and the CDC, as well as local, state and federal authorities.

“We’re handling situations on a case-by-case basis and are adjusting our employee guidance accordingly as the guidance of leading authorities is updated,” the spokesperson said.