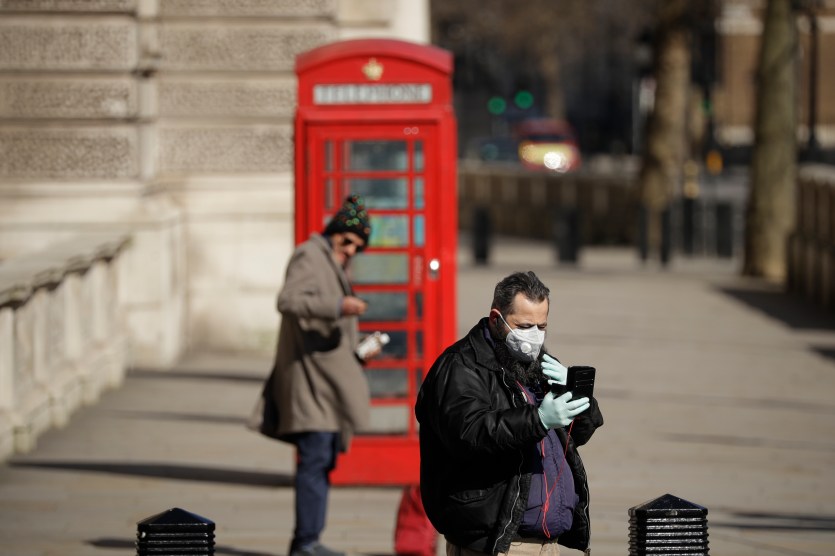 Being cooped up at home to slow the spread of coronavirus is forcing a lot of us to grapple with new technologies. To fight isolation, friends have turned to “Netflix Party,” a browser extension that lets people sync their computers to watch movies or TV together. Offices are using video conferencing tools like Zoom and Google Hangouts to run remote meetings. Shut-ins are using the same apps to hold virtual happy hours. Mourners are using them to hold funerals. But aside from spreading new technologies, the coronavirus has brought back at least one nearly forgotten one: chain mail.

Chain messages warning that cities will be shut down, saying martial law will be imposed, or promoting hoax preventative measures have spread far and wide in the last several weeks, not just on bulletin boards and social media, but through text messages and emails. Their original sources are unknown, and the information they pass along is usually misleading or outright wrong—just like the postal nuisance chain mail of old.

For a minute in the 2010s, it seemed like the scourge of chain mail, or at least most the harmful kind, had been nearly vanquished. The medium was long past its heyday in the 90s and early 2000s, and the chain messages that still went around were mostly relegated to aging baby boomers, seemingly fated to die when they did.

Even though they’re not passed around as much, hobby archivists have preserved our chain mail history, including emails promising fabulous wealth or the potential to avoid injury or death. On a website that appears to have last been updated in 2019, but looks like it’s from a 1990s internet before people used colors or images, independent researcher Daniel W. VanArsdale keeps a collection of chain letters going as far back as 1917, along with papers he’s written on related subjects. Another 90s-looking site indexing chain mail is run by Donald Watrous, a systems programmer at Rutgers University.

“If you have always dreamed of getting that lucky break, you just got it!” reads one 1999 example of paper chain mail documented in VanArsdale’s collection,  purportedly from a person named David Rhodes. “If you follow these instructions exactly, in good faith, your dreams will come true…in 20 to 60 days, you would receive more cash than you would believe, all in the mail!”

The timing suggests this likely illegal physical chain letter could have been one of the last of its kind. Even prior to its circulation just before the turn of the millennium, chain messages were already starting to migrate to email, where the barriers to creating and spreading them widely were lower. An outlandish 1998 email one in Watrous’s archive opens with; “Folks, I called Disney my damn self. It’s no lie. GET IT DONE! You all owe me.”

“If you read below you will see the note from Walt Disney Jr. & Management at Disney World. Basically if this messages reaches 13,000 people, everyone will receive $5,000.00 or a free, all expenses paid, trip to Disney World in anytime during the summer of 1999,” it continues. How does Disney know where to distribute the money and park visits? Via a supposed “Bill Gates’ Beta Email Tracking” system deployed by Disney in partnership with Microsoft that “tracks everyone to whom this message is forwarded.”

There’s no way a medium based on such absurd premises could keep going. While the internet enabled the easy spread of such messages, it also provided the ability to verify or debunk information by opening a new tab and pressing a few keys. And they didn’t keep going. While fact-checking doesn’t always stem the spread of misinformation—as our current era clearly indicates—in the case of the simple and obviously outlandish lies of chain emails, it seemed to work. With the rise of Snopes and other myth-busting sites, email chains mostly faded, consigned to older, less-tech literate generations. The chain mail that remained and circulated outside the geriatric crowd is usually tongue in cheek, like extremely lewd, and emoji-laden viral texts—irony soaked messages meant to spread a joke, not deceive.

But like any other gross and opportunistic virus chain mail never entirely died, and such texts were only one way the messages evolved and kept going on new platforms. Back in 2013, John Herrman explained for BuzzFeed News how Facebook helped a new heartwarming strain of chain mail thrive: “For a casual Facebook user, verifying a post and sharing it are both easier than ever before. But one of those two things is still significantly easier than the other, and Facebook’s rewards system favors the latter.”

Posts with titles like “THIS IS A BEAUTIFUL LIFE LESSON” and “This man found a dying dog and nursed it back to health. You HAVE to read what he wrote” spread far and fast. They weren’t like older chain mail stories promising the recipient would be murdered or haunted if it wasn’t forwarded—a style to which most people had become desensitized.

“By forwarding them we allow ourselves to believe that we can command the future.”

Like the forms before it, heartwarming chain mail and Facebook posts fell back, and chain messages again mostly went into hibernation. The most prominent exception was a rash of Facebook posts across the last decade where users seemed to believe that copying and pasting texts beginning with “I do not give Facebook permission…” would protect their data and constitute a legally binding agreement with the company. This copypasta—a recirculated and replicated messageboard post roughly equivalent to chain mail—infected Facebook, duping even supposedly tech-savvy millennials. Another copy pasta from 2016 claimed to be in the name of Dakota Access Pipeline protestors and asked Facebook users to, from the comfort of their own homes, “check-in at Standing Rock, ND to overwhelm and confuse” law enforcement trying to surveil protestors through social media and urged people to pass the message on.

But potentially harmful chain messages have gotten a massive second wind this year, as it became clear that America wouldn’t be able to dodge the coronavirus which had been ravaging China, Iran, and Italy. Almost two weeks ago, when people started realizing the scale of the threat and mobbing grocery stores in response, a hoax message went viral from someone who claimed to be friends of friends with someone at the New York Police Department saying that parts of the city’s transportation network would be “shutting down.” NBC’s Ben Collins chronicled how other false text messages warning of martial law surged nationwide. As early as January, even, before it became apparent that the coronavirus would affect the U.S. at scale, copypasta hit the internet from someone claiming to know someone at the Centers for Disease Control and Prevention, urging tips to combat the coronavirus, including the unsubstantiated advice that frequently drinking water would curb the virus. That message eventually ended up in my colleague Rebecca Leber’s inbox in March, suggesting that it later circulated widely as a chain email.

The Facebook permissions and Dakota Access pipeline copypastas show people eager to share chain messages about their fear of real things and that mesh with a desire to make the world a better place. Coronavirus chain mail has taken advantage of both instincts. “It’s playing off people’s goodwill to share information with loved ones and protect one another,” says Joan Donovan, director of the Harvard Shorenstein Center’s Technology and Social Change Research Project.

This has basically always been the formula for chain mail, or any other social engineering project designed to exploit human psychology, like phishing or other scams. Old chain mail threatening supernatural harm or bad luck or promise riches was trying to capitalize on people’s sense of fear or opportunity. If we didn’t share the message, we thought there was a chance we might we’d be killed by the ghost of a small girl or miss out Bill Gates sharing his fortune. We may have recognized it was a small chance, but forwarding the message was worth it, given the negligible downside risk. Or, as Bijan Stephen distills it for The Verge: “The appeal of chain letters is about control: By forwarding them we allow ourselves to believe that we can command the future. Or at least ward off the worst.”

That’s where we are with the coronavirus. We don’t know a lot about it. Scientists don’t even know that much yet. People are ready to grasp at anything to feel like might make them safer, and they’re willing to pass on whatever they learn too. In this ‘I’ll believe anything and spread it’ phase, sharing the messages can give fleeting hope of gaining some control over a situation that feels uncontrollable.

It’s why even CVS’s chief medical officer sent coronavirus misinformation to the entire company that came straight out of a Facebook chain copypasta, its why people keep passing around fake information about how drinking water ever 10 or so minutes will help ward off the virus. and it’s why viral misinformation right now is just generally out of control.