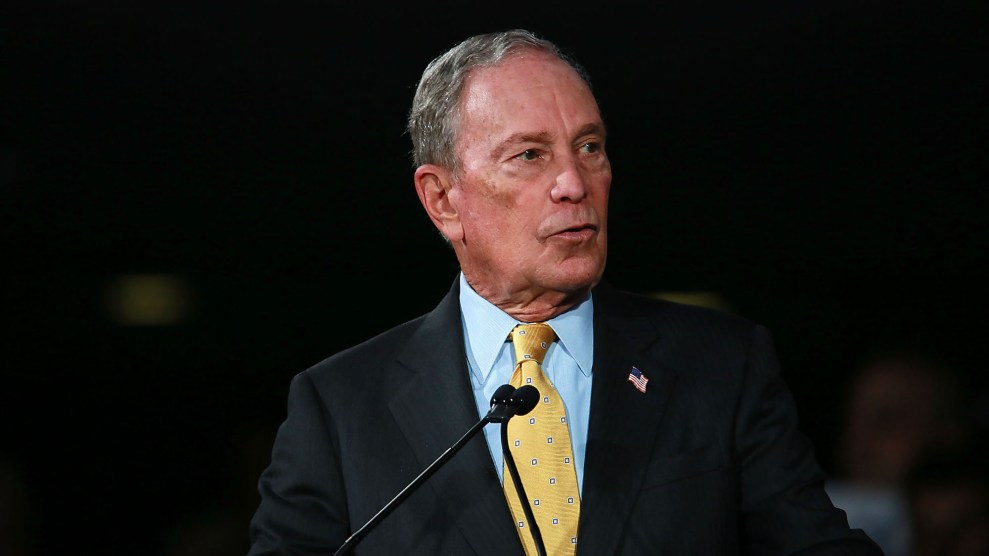 While the rest of the Democratic field frantically barnstormed New Hampshire on Saturday, a field director for Michael Bloomberg’s presidential campaign was opening his pitch to a room full of volunteers about an hour beyond New Hampshire’s southern boundary, in Massachusetts.

This time of the year in New England, presidential organizing doesn’t usually make it south of the New Hampshire line. Traditionally, campaigns have made winning in the early voting states a priority, with most pinning their hopes on securing more cash and momentum to make it viable to set up operations in Super Tuesday states and beyond.

The idea that a campaign would already be staffing up and training volunteers in Massachusetts—or anywhere beyond New Hampshire, South Carolina, and Nevada, the next three states to vote—would almost be too presumptuous, a waste of precious campaign resources. Conventional wisdom dictates that if you can’t win in New Hampshire or South Carolina, the money and the support will be gone by the time you get to Massachusetts, which votes this year on March 3. If it’s three days before the New Hampshire primary, every resource is up north, not in suburban Boston, coaching volunteers for a primary nearly a month away.

But this past week, Bloomberg’s operation was doing just that, and a great deal more—something more on the scale of a national campaign kickoff. First was the announcement that Bloomberg was increasing his nationwide campaign staff to 2,100 and expanding his already expansive ad buys around the country. And then, on the Saturday before the New Hampshire primary, Bloomberg was traveling to Alabama and Oklahoma to make campaign stops, while surrogates spread out through other states. It was all part of a “weekend in action” with events in 30 states, including Massachusetts, a Super Tuesday state and the former New York City mayor’s home state. (He grew up in Medford.)

“We’re in swing states,” Nick Alto, a Bloomberg Massachusetts field director, told the 20 or so volunteers who showed up in Brookline on Saturday said. “We’re in these important states…and with big staffs.” He added for emphasis, “Huge operations.”

Traditionally, the idea that a campaign would already be staffing up and training volunteers in Massachusetts would almost be too presumptuous, a waste of precious campaign resources.

The message to the volunteers was clear: You should feel the power, the methodical investment, and the stability of Bloomberg’s growing campaign and understand that he’s not going to come or go based on the whims of a handful of early voting states. Iowa, New Hampshire, and South Carolina don’t matter—not that Bloomberg is even on the ballot there; he missed the filing deadlines—because Bloomberg is doing something bigger and has the unlimited resources to sustain it. In Brookline, Alto’s volunteer training emphasized not only that the investment has been made, but that it will continue, “even if he’s not the nominee.” Bloomberg has pledged to spend heavily to help the eventual Democratic nominee defeat President Donald Trump.

The volunteers who showed up to the Brookline state headquarters for Bloomberg seemed comforted by that message of power and stability, describing Bloomberg as someone who, as an avowed capitalist and the ninth-richest person in the world, was not vulnerable to accusations of socialist politics.

“People are so worried the market is going to tank if a socialist Democrat gets elected,” said Kevin Fandel, a retiree who showed up for training—the first time, he said, he had volunteered for a campaign. “He knows the markets. He knows how to keep them stable and moving.”

Fandel said that before Bloomberg got into the race, he hadn’t decided on a candidate to back but was partial to Biden because he was a “known quantity.” But Biden’s uneven debate performances recently gave him second thoughts about whether the former vice president is up for a big fight.

“I think he’s a good man,” Fandel said, almost apologetically. Then he added, about Bloomberg, “I don’t think he’s intimidated by Trump at all. He really sees him as a con man.”

Several other volunteers offered similar sentiments, unsolicited. Some of the present Democratic field struck them as too liberal, but the moderate candidates left something to be desired.

“I wasn’t hot-to-trot, but I probably would’ve voted for Biden,” said Sandy Goldstein, another phone bank volunteer, who, like Fandel, had grown less enthusiastic about the former vice president and seemed apologetic that she couldn’t get excited about him. Goldstein said she liked the way Bloomberg projected firmness.

“He shows authority and credibility,” she said.

Some of the Bloomberg volunteers appeared worried that the other centrist candidates lacked the gumption or the means to go head to head in a knock-down fight with Trump.  While other Democrats have accused Bloomberg of buying his way into the Democratic race, Bloomberg’s bottomless pockets seemed to be a big part of the appeal.

“I don’t think he’s buying it, I think he’s investing his resources,” Fandel said. After a moment, he added, “You have to trust someone, and I’d rather have him buy the election, if that’s what you want to call it, than have the pharmaceutical industry or the gun industry buy the election.”

The Brookline volunteers also seemed to like Bloomberg’s reputation for directness.

“I think there’s even a way to appeal to Trump voters,” Goldstein said. “He’s got that kind of straight talk to him, but with him, it has dignity.”