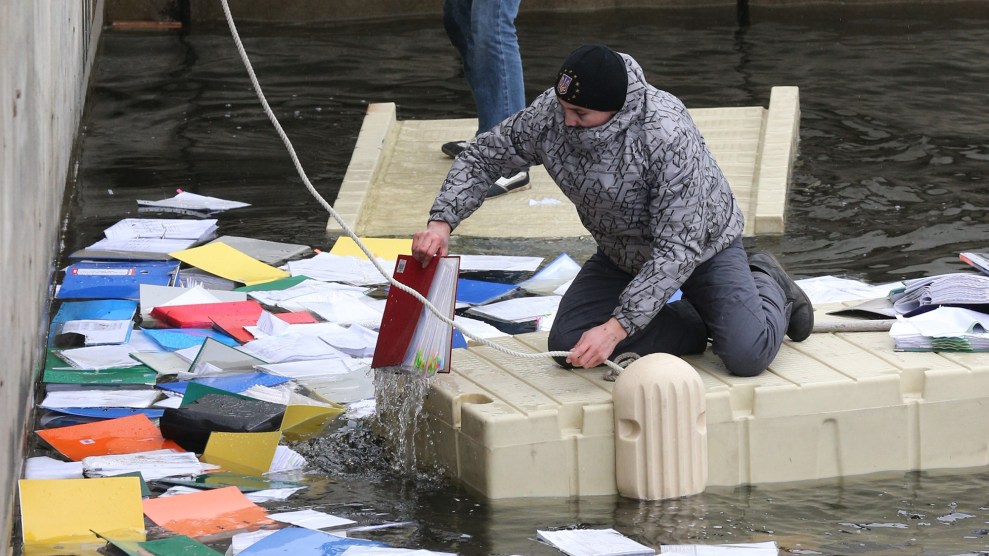 When Ukrainian President Viktor Yanukovych fled in 2014, journalists salvaged thousands of waterlogged documents that exposed the extent of his government's corruption.Mikhail Pochuyev/Zuma

On a chilly morning in February 2014, a group of journalists stood on a dock inside the abandoned estate of Ukrainian President Viktor Yanukovych and saw an astonishing sight. Loose papers and colored file folders were bobbing in the Dnieper River, tossed there by the fleeing president’s minions.

Yanukovych had just decamped for Russia after months of demonstrations in which more than 100 protesters had been killed by government security forces and snipers. Yanukovych left behind a 350-acre, $1 billion compound, which included a zoo, a golf course, a dog breeding center, and a lavishly furnished mansion. But not before attempting to drown the evidence against him.

Anna Babinets, one of the first journalists on the scene, recalls how she and her colleagues found divers who could get there, fast, to fish out the papers sinking into the ice-cold river. Everything happened fast that day, Babinets, editor-in-chief of the investigative journalism organization Slidstvo, recalled when I met her in Kyiv late last year. “It was,” she says, “revolution time.”

They were able to salvage 25,000 documents from the river. Babinets and a cast of fellow journalists spent the next eight days holed up in Yanukovych’s compound, drying some of the documents on the ex-president’s heated massage table. Sleeping on ornate sofas or inlaid marble floors under $53 million worth of crystal chandeliers, they scanned every page and then posted them on a website called YanukovychLeaks before handing off dozens of boxes of documents to prosecutors. Oleg Khomenok, coordinator of YanukovychLeaks and now a board member of the Global Investigative Journalism Network, says he was too busy to dwell on the grotesque opulence. “We had a lot of adrenaline. We were working very fast to preserve and catalog those documents.”

Yanukovych’s departure triggered a series of revelations that would, in time, shake American politics. A key part of the backstory of Donald Trump’s impeachment began on that dock, a story that could not have been told without the tenacity and courage of Ukrainian investigative journalists.

Since 2000, at least five journalists have been murdered in Ukraine, according to the Committee to Protect Journalists; many more have been threatened and harassed for their work. Despite the risks, a vigorous culture of investigative reporting has emerged in the country. “Why do we even know about corruption in Ukraine?” says Katya Gorchinskaya, a co-founder of YanukovychLeaks and the former head of an independent TV channel. “It’s because of investigative journalism.” “The difference between Ukraine and other kleptocracies,” says Daria Kaleniuk, exec­utive director of the Anti-­Corruption Action Centre, “is that here investigative journalism flourishes.”

Journalists’ reporting on corruption contributed to the ouster of two Ukrainian presidents in rapid succession—and helped set in motion the events that culminated in Trump’s own Ukraine scandal. After Yanukovych came Petro Poroshenko, a billionaire oligarch who owned the nation’s largest chocolate brand and promised to fight corruption when he was elected in 2014. Babinets helped reveal his multiple offshore accounts as part of the global Panama Papers investigation. One month before Ukraine’s presidential election last spring, another investigative outlet reported that a top Poroshenko defense official had received kickbacks on grossly overpriced Russian gear while troops were battling Russian paramilitaries in eastern Ukraine. Poroshenko lost his reelection bid by a historic margin, with 73 percent of the vote going to comedian turned politician Volodymyr Zelensky.

Unlike his predecessors, Zelensky had few ties to the political establishment. He also wasn’t the kind of corruption-­tinged autocrat Trump has shown an affinity for. Suddenly, Trump didn’t have potential allies in Kyiv he could ask for a “favor,” as he put it in his infamous July 2019 phone call with the new president. According to Kaleniuk, Trump and his lawyer Rudy Giuliani’s scramble to create a counternarrative, that it was not Russia but Ukraine that disrupted the 2016 US election, relies heavily on a constellation of sketchy former officials from the two most recent governments. “Most of the corrupt prosecutors we are fighting with,” she says, “are so depressed at being out of office that they are finding allies in the US in order to discredit the reformers.” As Serhiy Leshchenko, the legendary investigative reporter who first exposed the secret presidential compound, puts it, “Giu­liani has found his useful idiots.”

In Ukraine, “Giu­liani has found his useful idiots.”

The Trump trail also leads back to Paul Manafort’s former office near Kyiv’s Independence Square, a stone’s throw from where babushkas now sell rabbit skin hats and toilet paper embossed with the visage of Vladimir Putin. Manafort, explains Leshchenko, was “Yanukovych’s guru,” the key figure behind his political comeback in 2010. (Yanukovych has the dubious distinction of being one of the few world leaders ousted from office twice by popular revolt—the first time in 2004 during the Orange Revolution.) “Manafort turned Yanukovych into a more imposing presence,” Leshchenko says. “He improved his posture, his clothing. Manafort helped Yanukovych develop narratives for his campaign. He found themes that would divide society. He ran a Trump campaign in Ukraine years before he ran the Trump campaign.”

Two years after Yanukovych was forced from the presidency, Manafort volunteered to be Trump’s campaign manager. As the 2016 US presidential campaign was heating up, a manila envelope landed in Leshchenko’s office in parliament, where he had won a seat on an anti-corruption platform. It contained 22 pages of handwritten financial records indicating secret payments to various business and political figures allied with Yanukovych. A prosecutor named Viktor Trepak (now a deputy prosecutor general in the Zelensky government) received 800 pages of financial documents detailing similar payments from Yanukovych’s Party of Regions.

Together, the record of under-the-­table payments, laundered money, and offshore bank transactions came to be known as the Black Ledger. The New York Times picked up on the document trail and in August 2016 reported that at least $12.7 million in illicit transfers from Yanukovych’s party were designated for Manafort. He resigned from Trump’s campaign shortly afterward. A little over a year later, special counsel Robert Mueller charged him with not paying taxes on the money earned in Ukraine, which helped land him a seven-and-a-half-year prison sentence.

Leshchenko believes he paid a price for bringing Manafort’s illicit payoffs to the public’s attention. He was up for a job in the Zelensky administration until Giuliani publicly denounced him as an enemy “of the president [and]…of the United States.” He didn’t get the position. He lost his reelection bid and now hosts a weekly political talk show on an independent TV channel.

And then there’s Burisma, the once-obscure natural gas company at the center of Trump’s obsessive efforts to damage former Vice President Joe Biden. Here, too, all roads lead to Yanukovych, explains Dmytro Gnap, a former editor-in-chief of Slidstvo who helped to expose the firm’s tax evasion. As Yanukovych’s minister of ecology, and during a previous government stint, Burisma head Mykola Zlochevsky had awarded his own company lucrative drilling licenses at heavily discounted prices. After Britain’s Serious Fraud Office and other investigators started looking into his maneuvers, Zlochevsky set out to recruit high-­profile international figures to serve on his board. “He was trying to legitimize the company,” says Gnap. The recruits included Hunter Biden, who received up to $50,000 per month, according to the New York Times, for lending his name.

Giuliani and Trump’s claim that then–Vice President Biden demanded the firing of Ukraine’s prosecutor general, Viktor Shokin, to derail an investigation into Burisma drives journalists like Gnap and Leshchenko crazy. In reality, they say, Biden wanted the government to get rid of Shokin, who was refusing to cooperate with the Burisma inquiries. Leshchenko told me there is a domestic investigation still looking into Zlochevsky’s self-dealing, but it does not have to do with whether Biden improperly pressured Kyiv to lay off. Nevertheless, the Ukrainians do not look kindly upon the younger Biden. “What you can say about Hunter Biden is that he took money stolen from the Ukrainian people,” Gnap says.

Shortly before I got to Kyiv, Giuliani had left Ukraine after a whirlwind visit with a correspondent for One America News in search of more dirt to muddy the Trump impeachment investigations. His sources, reported the Kyiv Post, “were the same resentful former prosecutors and several lawmakers of questionable repute.” For Kaleniuk, the anti-corruption campaigner, this story was getting to be wearily familiar. “We are seeing,” she says, “the performance of a Kremlin disinformation campaign.”

Back at Yanukovych’s compound, the effort continues to preserve the legacy of sleaze that haunts Kyiv and now Washington. Khomenok helps run a nonprofit that operates the estate as a museum of sorts, known as the “palace of corruption.” The silk rugs, suits of armor, and expensive baubles, like a high-end Swiss music box, remain as they were when Yanukovych fled.

As we sat in plush leather chairs inside the screening room where the president enjoyed watching Russian gangster movies, a guard named Denis said he’s had to fend off unwelcome guests. “Many people angered by Yanukovych wanted to demolish and burn this place. But we thought it is important to preserve it, as a symbol of the corruption, so we don’t repeat it.”