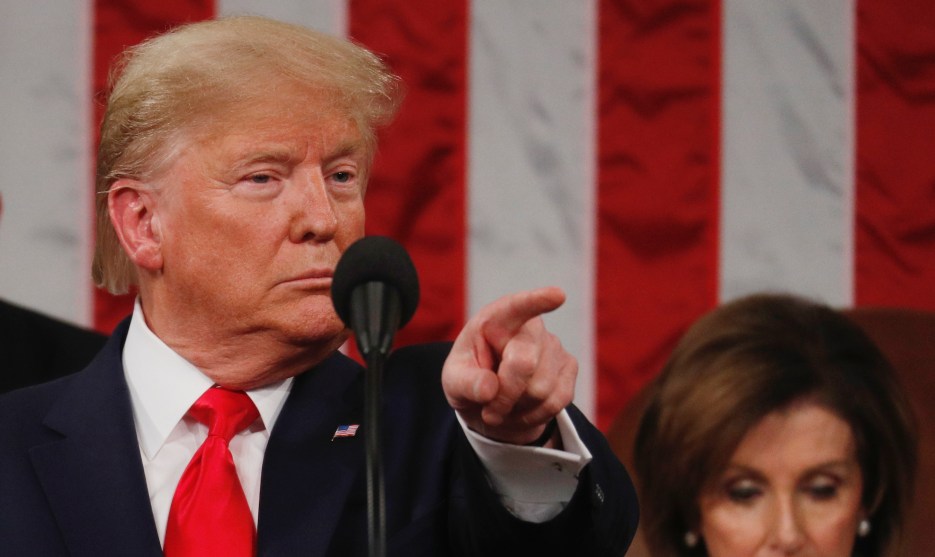 In a State of the Union that doubled as a reelection pitch, President Donald Trump claimed to be supporting the citizens of three Latin American countries struggling under leftist rule: Cuba, Nicaragua, and Venezuela. The selection was more than a little convenient. In November, Trump hopes that voters from those countries—many of whom live in Florida—will back him, not the Democratic opponent he will liken to the socialists many of them fled.

Trump’s push was reinforced by a guest in the House gallery. After calling Venezuelan president Nicolás Maduro “a tyrant who brutalizes his people,” Trump turned and introduced Juan Guaidó, the opposition leader who claims to be the country’s rightful president, with US backing. “All Americans are united with the Venezuelan people in their righteous struggle for freedom,” Trump said.

But as Guaidó took in bipartisan applause, roughly 24,000 Venezuelans across the United States were facing deportation. Trump could grant them work permits and temporary protections against deportation at any time. He chooses not to.

Trump’s policies have placed other Venezuelans in more dire situations. For the past year, under a program known as Remain in Mexico, the Trump administration has forced roughly 60,000 asylum seekers to spend months in cartel-controlled border cities while they wait for immigration hearings they’re set up to lose. Among them are more than 7,700 Cubans, 2,000 Venezuelans, and 1,400 Nicaraguans. There have been more than 800 public reports of violent attacks against people sent back to Mexico under the program.

Those who have been allowed into the United States have been sent to for-profit jails in the Deep South where they face indefinite detention and some of the nation’s harshest judges. In August, more than 150 Cuban detainees at a Louisiana’s Bossier Parish Corrections Center protested the Trump administration’s decision to make it nearly impossible for them to be released from detention and made eligible for green cards. As Mother Jones reported, guards responded by pepper-spraying them.

In October, Roylan Hernández Díaz, a Cuban asylum seeker, died by apparent suicide at another Louisiana jail. “Sadly, we can’t understand what’s going on in this country that the whole world comes to take refuge in,” his partner, Yarelis Gutiérrez, told me the day after his death. “Look at what’s happening today. You just don’t know if they’re getting asylum or dying.”

Two days after Christmas in 2018, I met Isaac Molina, along with his partner and her two children, at a border crossing in Tijuana. Molina is exactly the type of person Trump wants to be seen as championing. He is a Nicaraguan doctor who provided medical attention to people protesting President Daniel Ortega. Molina escaped to the US-Mexico border after being shot in the back and abdomen by police officers loyal to the Nicaraguan president. Instead of releasing Molina at the border, the Department of Homeland Security separated him from his family and sent him to a for-profit prison in rural Mississippi. ICE finally released Molina in April after a four-month legal battle.

Trump has inflicted similar suffering on thousands of other Nicaraguans, Cubans, and Venezuelans. When their compatriots head to the polls, Trump’s best hope is that they ignore his actions and think only of his words.