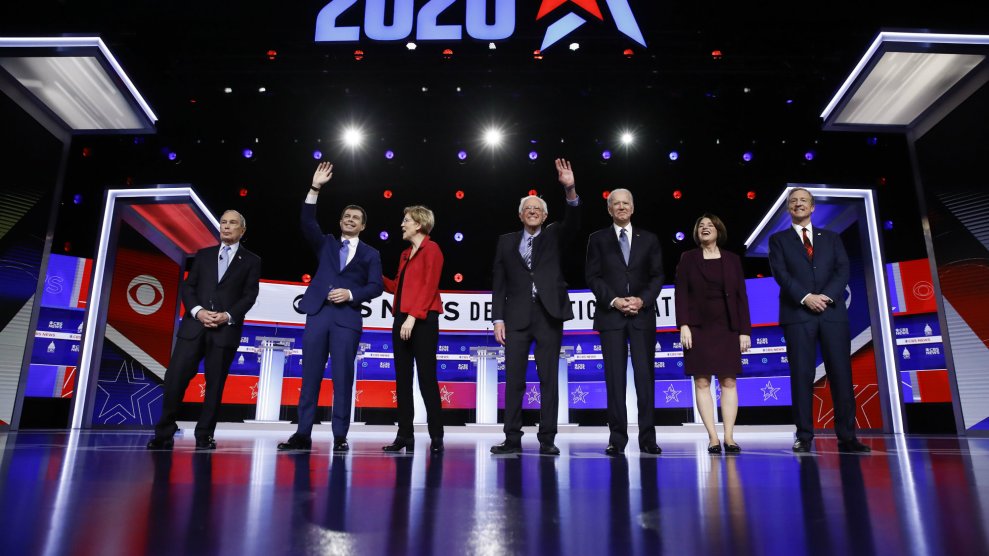 The chaotic, rollicking debate on Tuesday night offered a chance for Democratic presidential candidates to make their closing cases to the Black voters of South Carolina, who constitute roughly two-thirds of the Democratic primary electorate. Given that the closest thing to diversity on stage in Charleston was the liver spots on the old guys, the debate could only have ever been one thing: a festival of pandering. Here are some of the most panderiffic moments from Tuesday night.

Former Vice President Joe Biden has maintained a lead among Black voters in South Carolina for most of the race. An NBC News/Marist College poll late Monday night showed that he held a 15-point lead over Vermont Sen. Bernie Sanders among Black voters. But on Tuesday, CBS’s Gayle King put him on the defensive, pointing out that his “numbers appeared to be slipping.” Biden didn’t believe it, adding that he would instead “earn the vote of the African-American community” in South Carolina and beyond.

I’ve worked like the devil to earn the vote of the African American community not just here but across the country. I’ve been coming here for years and years creating jobs here…The people know me. My entire career has been wrapped up in civil rights and civil liberties. I don’t expect anything. I plan to earn the vote.

Stop-and-frisk came up again Tuesday night. And, again, Michael Bloomberg, the billionaire former New York City mayor, repeated the misleading explanation that he “cut it back” and “let it get out of control.” He leaned on the endorsements he has received from Black leaders.

I’ve apologized and asked for forgiveness. I’ve met with Black leaders to try to get an understanding of how I can better position myself and what I should’ve done and what I should do next time. Let me tell you. I’ve been working very hard. We’ve improved the school system for Black and Brown students in New York City. We’ve increased the jobs that are available to them. We’ve increased the housing available to them…I have over 100 Black elected officials that have endorsed me. A lot of them are in the audience tonight.

"We let it get out of control": @MikeBloomberg addresses the controversial stop and frisk policy enacted under his tenure as New York City mayor. #DemDebate pic.twitter.com/XbmuKtrSWN

Buttigieg: None of Us Can Truly Know Black People

Gayle King turned to another former mayor on stage, South Bend’s Pete Buttigieg, who has struggled to attract support from Black voters ahead of the South Carolina primary. He acknowledged that New York City’s implementation of stop-and-frisk was racist. And then, perhaps eager to avoid the landmines in his own fraught history with his police force, he pivoted by outwoking his colleagues on stage:

I’m not here to score points. I come at this with a great deal of humility because we have had a lot of issues especially when it comes to racial justice and policing in my own community. And I also come at this from the fact that there are seven white people on this stage talking about racial justice.

As Steyer and Bloomberg raised their hands to speak, Buttigieg leaned into the answer and explained that his white competitors couldn’t possibly understand the “lived experience” and challenges of Black and Brown voters.

None of us have the experience, the lived experience, of, for example, of walking down the street or in a mall and feeling eyes on us regarding us as dangerous without knowing the first thing about us just cause of the color of their skin. None of us have the experience of Black women have had that drives that maternal mortality gap that we are all rightly horrified by…The next best thing we can do is listen to those who do.

.@PeteButtigieg says stop & frisk was racist & acknowledges the lack of candidates of color at the #DemDebate.

"I come to this with some humility because I'm conscious of the fact that there are 7 white people on this stage talking about racial justice.” https://t.co/66AoqMK8pw pic.twitter.com/iT9qNvLeQI

Later in the debate, Buttigieg took a shot at Sanders for his “nostalgia for the revolution politics of the ’60s,” adding that “this is not about what was happening in the ’70s or ’80s, this is about the future.” Although Buttigieg was referring to the Sanders’ past comments on liberation movements in Cuba and Nicaragua, he might’ve given some thought to the ’60s-era revolution politics that unfolded right here in the United States. Score this one an anti-pander.

Klobuchar: I Know This One Martin Luther King Jr. Quote

When Minnesota Sen. Amy Klobuchar, a former prosecutor, was asked about whether stop-and-frisk was racist, she said yes and then expanded her answer to condemn “racism in the criminal justice system,” shoehorning in a reference to one of the Martin Luther King’s more memorable lines:

I think what we need to do, instead of reviewing everything from the past, is talk about where we are going to go forward. Martin Luther King once said we are all tied in a single garment of destiny. What effects one of us directly affects all of us indirectly. So when there is racism in the criminal justice system, we need to fix it.

Buttigieg: You Know Who Else Used the Filibuster?

During an exchange about the filibuster, Buttigieg reminded people that “we are in the state where Strom Thurmond”—the longtime segregationist senator—”used the filibuster to block civil rights legislation repeatedly.” A good pander, and a reminder that the filibuster is a tool of minoritarian obstruction that has been used to sustain racist status quos.

Buttigieg: We are in the state where Strom Thurmond used the filibuster to block civil rights legislation repeatedly…. I was in highschool when Columbine happened and I remember everyone in Washington saying ‘never again.’ Shame on us

Though billionaire philanthropist Tom Steyer isn’t within sniffing distance of the nomination, Biden chose to knock him around over his record on private prisons. Steyer used to invest in the facilities in South Carolina, which Biden kindly reminded him of. So Steyer responded by throwing the disastrous 1994 federal crime bill back in Biden’s face. “You wrote the crime bill,” Steyer exclaimed. “[It] put hundreds of thousands of young Black and Latino men in prison!” Steyer touted himself as someone who fights for the rights of people of color. “I have worked for racial justice completely!”

Later in the evening, Steyer asserted that he’s the only candidate on stage who supports reparations. This is true, though all the other candidates on stage—save for Bloomberg, a late entry into the primary—have said they support a study on reparations.

.@TomSteyer calls for reparations for slavery and a formal commission on race that will “retell” the story of “systematic, legal injustice, discrimination and cruelty” against African-Americans through U.S. history #DemDebate https://t.co/nLka6l2vw9 pic.twitter.com/10L0W66M6B

In the wake of the 2008 housing crisis that crashed the economy and threw millions of people out of their homes, Bloomberg blamed the end of redlining practices whereby Black people were denied access to government-backed mortgages. Warren used Bloomberg’s comments to call out the futility of race-neutral housing policy. “We can no longer pretend that everything is race neutral,” she said. “We have got to address race consciously what’s happening in this country.”

In the war on drugs, Black and Latino people are disproportionately incarcerated for drug crimes. Now that marijuana legalization has arrived in some states and gained popularity nationwide, Sanders has a proposal: Not only will he expunge the records of those convicted of pot crimes, he’ll legalize weed at the federal level and “provide help to the African American, Latino, and Native American community to start businesses to sell legal marijuana, rather than let a few corporations control the legalized marijuana market.”

We are going to legalize marijuana on day one of my presidency. #DemDebate pic.twitter.com/j7qhg1jwz7

Biden: I’ll Put a Black Woman on the Supreme Court

In his closing comments, Biden made one last effort to reach out to Black voters. “I’m looking forward to making sure there’s a Black woman on the Supreme Court,” he said to applause. While that would indeed be historic, Black voters have repeatedly said they care about more than just representation. After all, eight years of a Black president got us…Donald Trump.

.@JoeBiden says that if he was president, he’d look forward “to making sure there’s a black woman on the Supreme Court.” #DemDebate https://t.co/66AoqMK8pw pic.twitter.com/hcwNoXs3sp