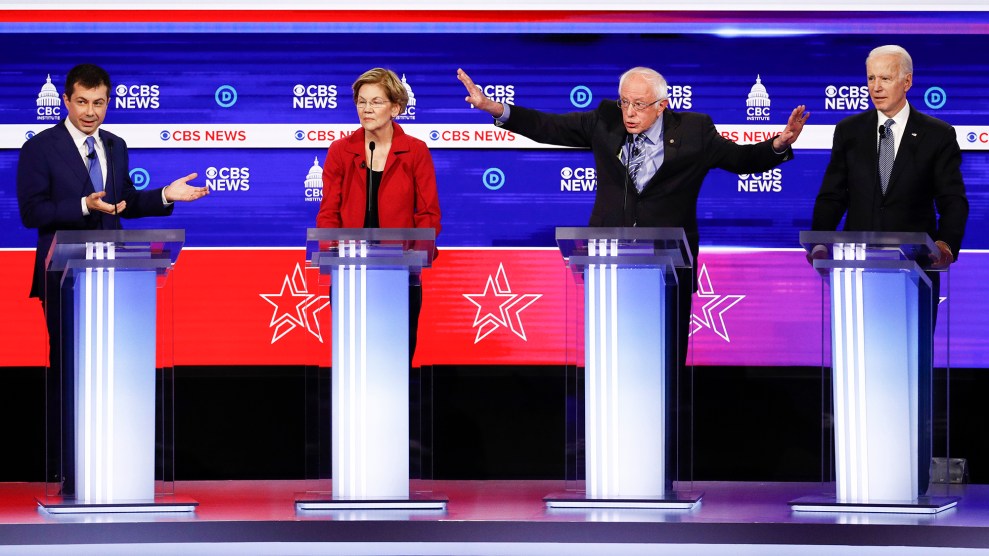 For the past month, Bernie Sanders has ascended to the position of clear frontrunner for the Democratic nomination. He claimed victory in Iowa, where the contested results leave a final tally still unknown, then won in New Hampshire and Iowa. Yet as the Vermont senator racked up delegates and gained momentum, the other candidates were tentative to take him on.

But on Tuesday in Charleston, South Carolina, that finally changed. Sanders was in the hot seat. The big question is whether the attack was too late—or, given the fractured support among moderate voters, it will even matter.

Being in the hot seat is expected of a frontrunner. Biden took heat this summer when he entered the race with the highest poll numbers. Warren took it in the fall as her campaign soared, and the attacks helped put the brakes on her momentum. But it took months for that spotlight to catch up to Sanders. This is in part because the candidates trying to win more moderate voters were busy clearing that lane for themselves, setting off repeated skirmishes on the debate stage between Pete Buttigieg, Amy Klobuchar, and Joe Biden. Warren, competing for voters on both the moderate and progressive wings, tried to play the role of uniter and played nice for months. But there’s finally broad recognition that the nominee may be rapidly chosen in South Carolina on Saturday and on Super Tuesday three days later. And if Sanders’ momentum continues, he may soon be the nominee.

So the debate in South Carolina became a last stand.

Warren took on her progressive ally, who she’d mostly refrained from criticizing, with digs on his ability to get things done. “Bernie and I both wanted to help rein in Wall Street. In 2008, we both got our chance. But I dug in. I fought the big banks. I built the coalitions, and I won,” she said, referring to the creation of the Consumer Financial Protection Bureau, which she envisioned and fought for. Later in the night, she took on Sanders’ approach to health care. “Bernie and I both want to see universal health care, but Bernie’s plan doesn’t explain how to get there,” she said. “I dug in, I did the work, and then Bernie’s team trashed me for it. We need a president who is going to dig in, do the hard work, and actually get it done.”

It was the sharpest contrast the Massachusetts senator had drawn with her colleague. And the other candidates followed suit.

Biden came out swinging at Sanders’ record on gun control, highlighting Sanders’ once-tentative positions on legislation that the senator has disowned over the past four years. “Bernie voted five times against the Brady Bill,” Biden charged, referring to the 1994 bill that created federal background checks and a waiting period for gun purchases, invoking the racially motivated 2015 mass shooting at the Mother Emanuel AME Church in Charleston, a stone’s throw from the debate stage. Then he lobbed a new charge: that Sanders supported a progressive primary challenge against President Barack Obama in 2012, which is likely to turn off some African American voters in South Carolina who have long supported Biden but have also warmed to Sanders recently.

It’s a common allegation from Sanders’ critics and a source of much Democratic anxiety that Sanders would lose to Trump because he can’t attract moderate voters. It’s a point Bloomberg makes frequently and reiterated Tuesday night. Buttigieg took it a step further. “Not only is this a way to get Donald Trump reelected,” he said in reference to a Sanders nomination. “We have a House to worry about. We have a Senate to worry about. And this is really important. They are running away from your platform as fast as they possibly can.”

Warren and Buttigieg then teamed up on the question of the filibuster, which allows senators to stop legislation that has majority support but fewer than 60 votes. Warren has said she supports doing away with this rule. “Understand this, the filibuster is giving a veto to the gun industry,” Warren said. “It gives a veto to the oil industry.  It’s going to give a veto on immigration.” She added, “many people on this stage do not support rolling back the filibuster. Until we’re ready to do that, we can’t have real change.”

Sanders is one of those who has opposed eliminating the filibuster—a position that signals Sanders’ dislike for tampering with institutions even as he calls for enormous change from outside Washington. Buttigieg, who has embraced more structural change alongside Warren, tag-teamed Sanders on this issue. “How are we going to support a revolution if you won’t even support a rule change,” he said. “We are in the state where Strom Thurmond used the filibuster to block civil rights legislation repeatedly.”

The big question four days from the South Carolina primary and just seven from Super Tuesday is whether these attacks will stall Sanders’ progress. If not, they have at least done Sanders the service of readying him for the attacks he would inevitably receive from Trump—that his democratic socialism is akin to communism, bolstered by his past sympathetic comments about Cuban dictator Fidel Castro. When this came up Tuesday night, Sanders grew more heated than usual, arguing that praise for some of Castro’s policies was not tantamount to praise for repression. But it’s a defense he might need to retune if he’s the nominee.

But on Tuesday, Sanders’ job was to convince voters that a vote for him is not, ultimately, a vote for Trump and Republican control of Washington, as his opponents allege. “Of the last 50 polls that have been done nationally, Mr. Bloomberg, I beat Trump 47 of those 50 times,” he said. “If you look at battleground states like Michigan, Wisconsin, and Pennsylvania, polling just done this Sunday, I beat Trump.”

To defeat Trump, he said later in the evening, “We need to have the largest voter turnout in the history of the United States. We need to get young people voting the way they never have before.”

Will the criticism cause voters to question this vision? Even if it does, Sanders may still be on the fast track to the nomination, with Bloomberg, Buttigieg, Biden, and Klobuchar dividing the votes of people who believe Sanders is ill-equipped to win in November.