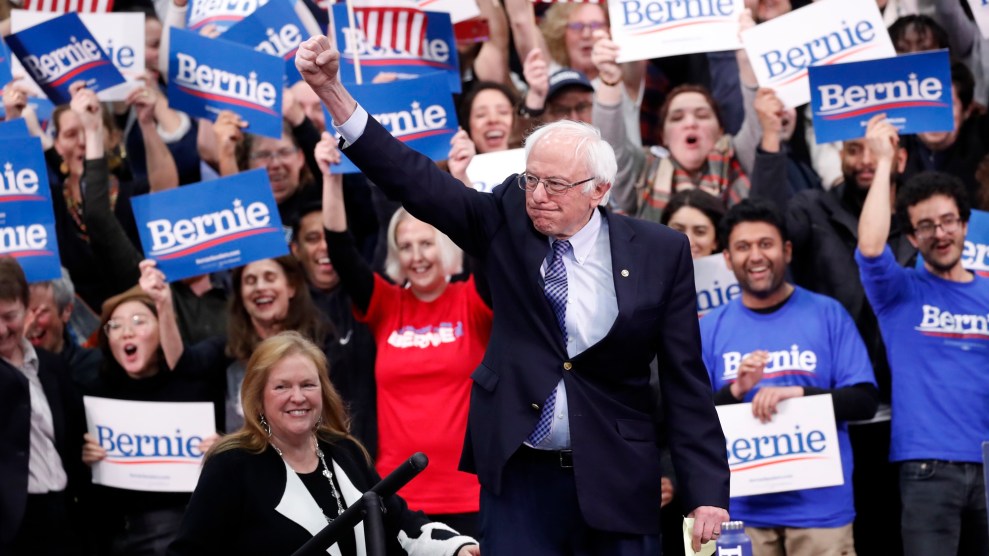 Sorry, New Hampshire. A conventional rule of American politics is that the Granite State imposes order on the presidential campaign, with one of the top two finishers in its first-in-the-nation primary always going on to snag the nomination. But not this time. At least not in terms of smoothing out the bumpy process.

Bernie Sanders, the US senator and democratic socialist from next-door Vermont, achieved an impressive victory, placing first with, as of current vote totals, 26 percent. And former small-town mayor Pete Buttigieg, the first openly gay candidate to mount a major presidential bid, scored an impressive second, collecting 24 percent. The surprise was Amy Klobuchar’s late surge that landed her in third, 4 points behind Buttigieg. Both Elizabeth Warren (9 percent) and Joe Biden (8 percent) were smacked with worse-than-expected results.

Though the New Hampshire numbers will boost the campaigns of the top three, this primary has not diminished the chaos of the race. Instead, it has demonstrated the Democratic Party, as it seeks to find a champion who can defeat Donald Trump, remains intensely fractured.

Our reporters fanned out to victory parties for the top three Democratic finishers for this edition of the Mother Jones Podcast, “How Bernie Sanders Won New Hampshire.” Listen:

That conclusion is not a dig at Sanders. It is statement of math. Look at the past winners of competitive New Hampshire primaries. Last time, Sanders won with 60 percent of the vote (to Hillary Clinton’s 40 percent). Eight years before that, Clinton beat Barack Obama 39 to 36 percent. In 2004, John Kerry took 38 percent to Howard Dean’s 26 percent in a five-way contest. Al Gore in 2000 triumphed with 50 percent to Bill Bradley’s 46 percent. Typically, the New Hampshire winner crosses the finish line with a vote count between a third and three-fifths of the electorate. This year, Sanders emerged victorious with a quarter.

Sanders is coming out of New Hampshire with a smaller slice of the vote than any other Democratic winner in the primary’s history. (Jimmy Carter placed first with 29 percent in 1976). That means a large majority of the Dems and independents who voted in this contest do not prefer to see Sanders become the party’s standard bearer. In previous cycles, the victories were more decisive, with the successful candidates having won over a much larger chunk of the voters (in this highly non-representational state).

Of course, the winner’s vote take was lower this year partly because there were more credible candidates. But in 1992, with five top-tier candidates in the contest, Paul Tsongas, the senator from next-door Massachusetts prevailed with 33 percent. (Bill Clinton placed second with 25 percent.) And in 1988, Michael Dukakis pocketed 35 percent, with none of his five rivals gathering more than 20 percent. So even in full-field competitions of the past, the victor had a stronger showing than Sanders’ 2020 take.

The bottom line: There was a winner, but Sanders does not at this point hold a dominant position within the Democratic cosmos. With no single candidate staking a claim on more than about one-fourth of the vote, there is plenty of incentive for other candidates to stay in the hunt. This may be especially true since the two leaders at the moment each trigger questions among some voters about their electability. Sanders would be the first Jewish and socialist presidential nominee of a major party, and Buttigieg is a gay nominee with modest political experience.

In her concession speech, Warren, looking for a path forward, warned that the Democratic primary could descend into bitterness among “factions” in the party, and asserted that despite her dramatic loss in the backyard of her home-state Massachusetts her campaign was “best positioned to unite our party.” In other words, she’s not going anywhere. Biden, who fled New Hampshire before the votes were even counted, presumably is going to try to hang in there through the upcoming Nevada caucuses and the South Carolina primary. And Klobuchar has a gust of wind in her sails. (New Hampshire did break the backs of Andrew Yang and Michael Bennet, who each fared poorly and announced the suspension of their campaigns.)

A sharp battle of factions—Warren might be correct about that. This race could become a bloody crawl to Super Tuesday on March 3, when Michael Bloomberg and his hundreds of millions of dollars appear on the ballots—and then perhaps a different bloody crawl toward the convention in Milwaukee this summer.

The New Hampshire and Iowa results—and national polls—suggest that Sanders has a solid core of support of about 25 percent. (Buttigieg’s die-hard bloc is harder to assess at this point.) And if four or so other major contenders stick around, this one-in-four slice could propel Sanders to place first in many of the primaries and caucuses to come. But that’s not necessarily enough for Sanders to take a commanding lead in delegates. In the GOP, the first-place finisher in many primaries snag all the delegates. (That rule benefitted Trump in 2016.) In the Democratic contests, all states award delegates on a proportional basis. That would make it tough for a candidate who wins primaries with smaller percentages to acquire a majority of delegates. (Sanders and Buttigieg are projected to earn the same number of delegates out of New Hampshire.)

After New Hampshire, Sanders and his devotees can declare that—and celebrate that—he’s the leader.  But can Sanders, with his call for a political revolution, coax other Democratic voters into his camp? For years, Democratic strategists have contended that Sanders has a high floor but a low ceiling. He rattles centrist, moderate, and corporate Democrats. And it was common to hear non-Sanders voters in New Hampshire repeat the fear that Sanders’ embrace of the “democratic socialist” label will doom him and the party, should he become the nominee.

Those non-Sanders voters have been divvied up mainly between Buttigieg, Klobuchar, Warren, and the free-falling Joe Biden. How many of them can Sanders reach? His advisers maintain he will expand beyond his robust base by making progress with African American and Latino voters, who will play big roles in the next face-offs in Nevada and South Carolina. But Biden is counting on black voters to keep his political career alive, and Warren has also aimed organizing efforts at voters of color.

Then there’s Bloomberg. He is the X-factor of the Democratic contest and engaging in an intriguing political science experiment. Can a billionaire dump all that money into a race and buy a seat at the table? Will his presence further divide the non-Sanders voting bloc and actually help Sanders preserve a plurality? Will the former Republican mayor of New York City become the first choice of Dems who crave an alternative to Sanders? In that event, the Democratic nomination contest could turn into a vicious battle between the anti-billionaire socialist and an actual billionaire.

There’s a lot of supposin’ going on in the immediate aftermath of New Hampshire. This election did not afford the Democrats a major sorting out, and they may now be slouching toward a race in which the front-runner consistently comes in first with only 25 to 30 percent of the vote. What will happens if the number-one delegate-grabber only grabs a third or so of the delegates? There will be plenty of time between now and the convention in the summer to cook up and ponder all sorts of possible scenarios.

As voters headed toward the polls in New Hampshire, political reporters, who had spent many hours with the state’s undecided voters, repeatedly proclaimed the race was volatile. It was. (See Klobuchar’s rise and Biden’s collapse.) The opening primary crowned a front runner, but it did little to remove the volatility from the contest. Here comes a wild ride.