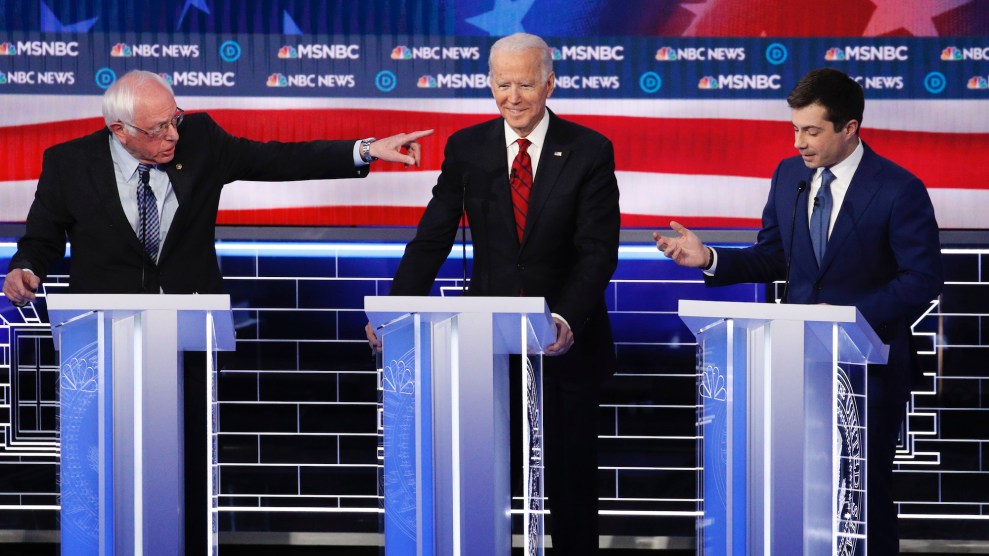 Bernie Sanders points at Joe Biden and Pete Buttigieg during a Democratic presidential primary on February 19, 2020, in Las Vegas.John Locher/AP

South Carolinians who turned on the television this week likely watched a 30-second ad in which Pete Buttigieg explains that some of his opponents in the Democratic presidential primary “say it’s Medicare for All or nothing.” “The choice should be yours,” as it would be under his health care plan, Buttigieg says. Those who logged into Facebook probably saw a digital ad from Joe Biden lashing out at fellow 2020 hopefuls who “want to get rid of” the Affordable Care Act and “destroy Obama’s legacy” in the process.

The wager Biden and Buttigieg are making, of course, is that Medicare for All, the government–run, single–payer health care plan favored by Bernie Sanders, is unpopular, and that the field’s moderates can siphon support from the current frontrunner by highlighting the differences in their plans. But there’s a countervailing narrative emerging in the Palmetto State: Medicare for All may not be as unpopular among Democratic primary voters as Sanders’ rivals bet.

In December, the left-leaning think tank Data for Progress asked 767 likely South Carolina Democratic primary voters whether they would support “a single, government-run plan” with no premiums, co-pays, or deductibles—a proposal that tracks most closely with the plans put forward by Sanders and Warren. Seventy-seven percent of respondents said they would back such a plan, with 49 percent saying they would “strongly” support it and 28 percent saying they “somewhat” would. The favorability was even higher among black respondents, who make up nearly two-thirds of South Carolina’s Democratic voting bloc; eighty percent of them said they would support a Medicare for All-type plan. The poll also found equally strong support for “improving and expanding Medicare so it becomes the primary insurer for all Americans,” which tracks most closely with what Buttigieg’s “Medicare for All Who Want It Proposal.” The takeaway was this: “Medicare for All” is not necessarily a poison pill.

The poll was commissioned by Medicare for All NOW, an advocacy group founded by former Cigna executive Wendell Potter. His group has been operating an organizing campaign across South Carolina since early February in an effort to educate voters—particularly black, rural voters—about a single–payer system in advance of Saturday’s primary.

But there’s reason to think that South Carolinians might be open to a heavier federal hand. It is one of 14 states that refused to take advantage of Medicaid expansion under the Affordable Care Act, leaving a vast number of poor adults uninsured. Lack of Medicaid funding correlates highly with the closing of rural hospitals; at least four have shuttered in South Carolina since 2010, the year the ACA became law. Without a stronger federal health care mandate, those trends are likely to persist.

“The black vote is largely taken for granted—that it will be Democratic and largely establishment,” says Kerri Evelyn Harris, who lost a House primary in Delaware last year and now serves as Medicare for All NOW’s movement director. “And yet, when you show up and explain the implications of an election and what particular policies will mean to them and their community, they’re moved by that.”

The group has nine paid organizers on the ground and has been invited to black churches and community gatherings to talk about Medicare for All. Elena Kershaw, who does organizing for the group in the Columbia area, says she’s spoken with older South Carolinians who support single–payer health care because under the current system, they have both Medicare or Medicaid coverage and are still paying out-of-pocket for many expenses. “And it’s about their children and children’s children,” Kershaw adds.

There is, of course, always “anecdata” to the contrary. Stephanie Priester, who does marketing for some of the health care providers in Greenville and attended Pete Buttigieg’s health equity roundtable with black community leaders in Greenville on Thursday, told me that “people want to feel like that part of their life is under their control, “ she said. “I don’t know how receptive folks are to having their private plans taken away. But affordability is really what it all comes down to—whatever saves people the most money.”

It’s unclear how much voters in South Carolina associate Sanders with the health care plan he champions. In some cases, it’s very much so: Nisi Moses, another Medicare for All NOW organizer from Florence, SC, told me she encountered a voter who didn’t want to learn more about Medicare for All because it’s so closely tied to Sanders. In others, not so much: Melinda Williams, who canvassed for Sanders in Sumter, said she convinced a voter to move her vote from Biden to Sanders after she told a supporter Sanders backed Medicare for All. A retired doctor I met at a Sanders rally in Myrtle Beach told me he’s voting for Sanders even though he disagrees with Sanders’ vision of “free health care for everyone.”

The latest polls leading into Saturday’s contest suggest Sanders is less of a threat than was imagined after his victory in Nevada. An NBC News/Marist poll conducted in the days leading up to Nevada had put Sanders just behind Biden among South Carolina voters, but the gap between them has widened since Tuesday’s Democratic debate. But no matter which way the polls go, there are signs that the health care industry is scared. On Tuesday, South Carolinians started seeing advertisements warning them that a “one-size fits all government health insurance system” would “double everyone’s income taxes” and that they’d “pay more to wait longer for worse care.” The last-minute, $200,000 ad buy was placed by the Partnership for America’s Health Future, a consortium of pharmaceutical, hospital, and health insurance lobbyists, all of whom stand to lose the most under a single–payer health care system.