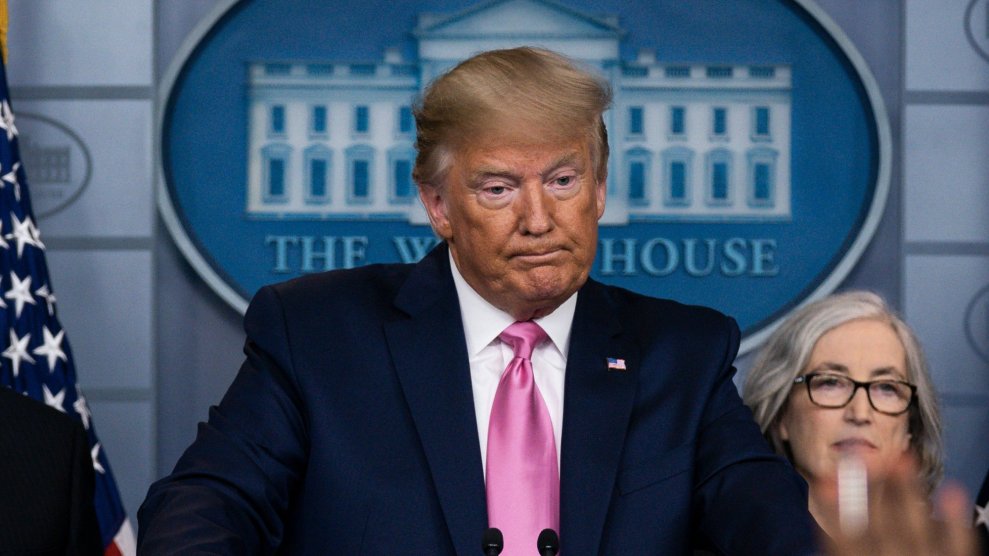 Coronavirus has already disrupted economies across Asia, tanked the US stock market, and taken a bite out of the earnings of the world’s wealthiest companies. Soon, there might be another financial casualty of the pathogen: President Donald Trump’s pocketbook.

Since he took office, Trump’s personal income has increasingly relied on his travel and resort business. That’s because he’s sold fewer condos, lost his product licensing deals, opened no major new properties, and no longer makes televisions shows. Of the $434 million in revenue the president disclosed earning in 2018, at least $336 million came from hotel management fees, his golf courses, or his Mar-a-Lago resort. Still, his personal hospitality brand—which generates much of its income from properties that rely on globetrotting customers—was already showing signs of strain. Now, with the international travel industry taking a hit from coronavirus, Trump’s properties could be in for hard times.

Coronavirus seems to have hit several of Trump’s known triggers—fears over the spread have rocked the stock market, which is one of his favorite metrics for measuring the success of his economic policies. And, of course, he’s a notorious germaphobe, who reacted to the threat of Ebola in 2014 by demanding that President Barack Obama issue strict travel bans:

Despite the ever increasing Ebola disaster, Obama refuses to stop flights from West Africa.It's almost like he's saying F-you to U.S. public

President Obama – close down the flights from Ebola infected areas right now, before it is too late! What the hell is wrong with you?

Six years later, these sorts of travel bans have been instituted in parts of Asia in an effort to combat coronavirus. That, combined with quarantines and a general fear of travel, has quickly decimated Asia’s travel industry. The Hyatt hotel chain, for instance, reported last week that its China business is down 90 percent. And by early February, the hotel market in New York City—where Trump still has one hotel, the Trump International Hotel and Tower—was feeling the loss of visitors from China, who had previously accounted for a growing percentage of the city’s tourists.

The Trump Organization—which, as a private business, reveals little public information about its actual profits—did not respond to requests for comment. But there have been indications over the past few years that Trump’s hospitality business is facing challenges. That hotel in New York City, for example, has reportedly experienced declines in profitability since Trump became president, with one of the few upswings coming in part due to a large booking by the entourage of the Saudi Arabian crown prince Mohammed Bin Salman.

Jan A. De Roos, a professor emeritus of hotel finance and real estate at Cornell University, says that coronavirus fears and travel restrictions have seriously affected hotels around the country. So far, he says, that has mainly impacted mid-range and lower-end hotels. But, he adds, higher-end hotels, like Trump’s string of properties, generally require fairly high occupancy rates just to break even. Given the signs that some of Trump’s properties were already struggling, De Roos says it wouldn’t take much for coronavirus to hurt Trump more than most.

Most of the hotels with Trump’s name on them aren’t actually owned by Trump. Typically, the Trump Organization has a management deal in which it is paid to run the day-to-day business of the hotel. In return, the president gets a cut of the profits at each location.

In 2018, Trump earned about $5.8 million from these arrangements. But many of the hotels are in parts of the world likely to be hit hard—or already being hit hard—by the virus. For starters, there are two Trump-branded resorts in Indonesia that have yet to open; they could be seriously affected if the Asian travel market stays moribund as they finish construction. The Vancouver market, where Trump manages a branded hotel, was badly shaken by the 2003 SARS outbreak, and local industry experts are bracing for a similar downturn this time. Trump’s biggest management fee was earned through a deal with the owners of a Trump-branded property in Hawaii, a tourism mecca entirely reliant on air travel. His second biggest earner is his Chicago hotel, which has reportedly seen profits fall by 89 percent since Trump took office—a precipitous decline even before a potential coronavirus-related drop in business hits.

The most prominent hotel in Trump’s stable is arguably his luxury hotel in downtown Washington, D.C., just blocks from the White House. It has become a clubhouse of sorts for Republican Party bigwigs and presidential supplicants hoping to impress the Trump by booking rooms.

De Roos says the DC property could be more or less immune from a coronavirus-inspired downturn because it appears to get so much of its business from political acolytes and interest groups trying to lobby for the president’s affection. “I think the saving grace…is the Old Post Office hotel,” De Roos says. “It’s basically become known as a power place to hang out.”

But, even with all that political patronage, Trump’s DC hotel, which the president owns outright, may be struggling in other ways. Last year, it generated $40.8 million in revenue, but under a lease agreement with the US government, which owns the physical building, the president is supposed to be paying a share of profits—if there are any—to the feds. He doesn’t appear to have made any such payments. And this past fall, the Trump family announced plans to try to sell the hotel, suggesting that all is not well.

In a package of promotional material prepared by a real estate firm hired by the Trump family, the hotel’s occupancy rate was listed at about 57 percent—significantly lower than competing hotels, and lower than what De Roos estimates the property would likely need in order to be profitable.

“Four- or five-star hotels need to be at about 60 percent,” he says. “Once you go below a certain level of occupancy, things get bad really fast, and you have to start to shedding staff fast.”

Another hotel property directly owned by Trump (together with investor Phil Ruffin) is his Las Vegas tower. It generated $22.5 million for Trump last year, but it could be vulnerable to potential a decline in the trade expo business, which draws millions to Vegas each year. The trade expo market has already been devastated in Asia, as corporations have begun rethinking whether to send employees to attend conventions in the wake of the outbreak.

It’s unclear how the coronavirus would affect Trump’s revenues at his Mar-a-Lago resort, which totaled roughly $22.7 million last year. It’s a members-only club, but many members aren’t local and travel to Florida from elsewhere in the winter months. Since he was elected, the club has hosted numerous political events and has become a magnet for overseas tourists hoping to get access to the president—in fact, several schemes to sell trips and access to the president at Mar-a-Lago have targeted Chinese citizens.

`Trump’s golf courses—especially those marketed as international destinations—could also suffer if coronavirus continues to spread. Last fall, Trump tried to pitch his golf resort in Doral, Florida, as a potential meeting site for the 2020 G-7 summit for world leaders—a plan that was ultimately scuttled after a bipartisan outcry. It’s not clear how much of its usual clientele is international, but the course seemed to be struggling even before coronavirus. (In the past, the company has blamed the course’s problems on the impact of the Zika virus and hurricanes.)

Trump has three golf courses in the British Isles, all of which are primarily marketed to international customers. A large portion of the international players at courses in Scotland and Ireland are American, says Gordon Dalgleish, president of Perry Golf, which arranges golf tours, including to the Trump-owned courses. That means there hasn’t been a major decline in business due to coronavirus, he says. At least not yet.

“At the premium properties, like St. Andrews, Gleneagles, or [Trump-owned] Turnberry, north of 50 percent of their traffic is coming form the United States,” Dalgleish says. “If you sat in the lobby, you’d hear a lot of American accents.”

The exclusivity of the courses Trump owns in the British Isles could help them avoid some of the initial shocks of a broader outbreak, Dalgleish says, because trips to play them are typically “bucket list” trips that customers would be reluctant to cancel. Moreover, he says, the major travel season at these resorts doesn’t until late April. But if coronavirus—which has already appeared in Europe and is disrupting travel in Italy and Spain—spreads more widely, things could get bad there for Trump.

“It’s the elephant in the room, who knows where it all plays out?” Dalgleish says. “If you’re in the tourism sector anywhere in the world, you’d be foolish to not be concerned about what happens next.”