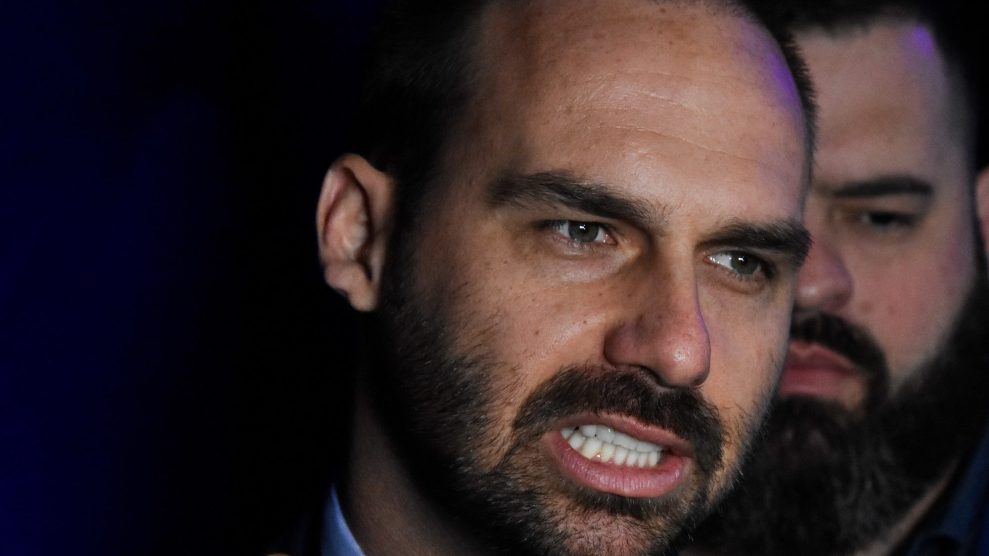 In October, Eduardo Bolsonaro made a shocking statement. The son of Jair Bolsonaro, the far-right authoritarian president of Brazil, suggested in an interview that his country may need to return to the tactics employed by its former military dictatorship to help crush his father’s enemies on the left. He asserted without evidence that Cuba was behind recent protests in Latin America and Argentina’s election of a moderate Peronist was part of a conspiracy to bring about a new leftist “revolution” in Latin America.

“If the left radicalizes to this extent [in Brazil] we will need to respond, and that response could come via a new AI-5,” he said, referring to the notorious Institutional Act Number Five, a notorious 1968 edict issued by the military government that indefinitely outlawed freedom of expression and assembly and shuttered the National Congress. The act began an era of intense political repression and media censorship. Hundreds of dissidents were tortured, killed and disappeared during the dictatorship, which ended in 1985. Elected officials in the country quickly denounced Bolsonaro’s comments as “repugnant” and a “serious attack on democracy.”

American conservatives, on the other hand, invited Bolsonaro to take the stage at one of DC’s biggest political events of the year, this week’s Conservative Political Action Conference (CPAC). Founded in 1974, when Ronald Reagan delivered the keynote speech, CPAC bills itself as the largest and most influential gathering of conservatives in the world. This week, the event will be headlined by both President Donald Trump and Vice President Mike Pence, along with a slew of prominent members of the administration, Fox News headliners, and other conservative luminaries.

One of the Brazilian president’s three sons, Eduardo Bolsonaro will join them to show off his brand of populism on three different panels, including one called “CPAC Exile: The Unshackled Voices of Socialist Regimes,” where he will be joined by other international CPAC representatives. Matt Schlapp, chairman of the American Conservative Union, which sponsors the conference, tweeted in January that the 35-year-old former police officer would “share how our conservative movement inspires freedom-loving people across the globe & how the US & Brazil can work together to stop socialism.”

In 2019 ACU hosted several international CPAC events, one of which was #CPACbrazil, thanks to @BolsonaroSP. At #CPAC2020 he’ll share how our conservative movement inspires freedom-loving people across the globe & how the US & Brazil can work together to stop socialism. pic.twitter.com/sXEEz4rLFx

“Freedom-loving” is an odd description of Bolsonaro, who is one of his father’s closest advisers. Along with its fondness for authoritarian governance, his family has been linked to organized crime and paramilitary gangs, and they have been accused of using the police and military for political repression. During the 27 years he served in Brazil’s Congress representing the state of Rio de Janeiro, Jair Bolsonado was a staunch defender of the military dictatorship and also the paramilitary death squads. In 2003, he said, “As long as the state does not have the courage to adopt the death penalty, those death squads, in my opinion, are very welcome.” He told the São Paulo-based magazine Veja in 1998, “Pinochet should have killed more people,” referring to the Chilean dictator. A year later, he declared, “I am in favor of torture, you know that.” Brazilian media have alleged ties between the Bolsonaro family and two former police officers who last year allegedly assassinated a Rio de Janeiro city councilwoman who was an outspoken human rights activist.

Yet the younger Bolsonaro has become a favorite of American conservatives allied with President Trump. He was reelected to the Brazilian congress in 2018, and last year, his father attempted to name him the ambassador to the US, Brazil’s most prestigious diplomatic post, which set off cries of nepotism. “03,” as Bolsonaro is known in Brazil, had little experience in international affairs beyond a college work-study program in the US, which included a brief stint working at Popeye’s. In 2017, Bolsonaro made a YouTube video standing in front of a mall Popeye’s talking about his work there. “I have experience around the world,” he said  later in response to criticism about his father’s desire to send him to the US as an ambassador. “I have fried hamburgers there in the United States.” (Critics were quick to point out that Popeye’s only serves chicken, not burgers.) In October last year, he withdrew from the nomination process.

Eduardo has often been compared in the press to Donald Trump Jr., with whom he has become chums. Like Don Jr., Bolsonaro shares his father’s political views, especially on climate change, which he has dismissed as a hoax. During the 2018 Brazilian presidential campaign, he suggested in his speech that if elected, his father would shut down the Supreme Court if there was any attempt to remove him from office. “If one wants to close the Supreme Court, you know what you do? You don’t even need to send a Jeep. Send two soldiers,” he said, adding, “What is the Supreme Court, man? Remove the might of the pen of a justice, who is he on the streets? If you arrest a justice, do you think people will protest in his favor? Millions on the street?”

Bolsonaro has also served as a megaphone for his father’s attacks on the media and political opponents. When Jair launched a public Twitter attack on the Brazilian documentary maker and Bolsonaro critic Petra Costa last month after she was nominated for an Academy Award, Eduardo piled on, calling Costa a “scumbag.” In a PBS interview in July, Bolsonaro defended his father for saying that one of his female political opponents was so ugly she was “not worth raping,” arguing that the woman had attacked his father first.

Just like Don Jr., young Bolsonaro is a Trump superfan. In his National Congress office in Brasilia, he has a shelf full of kitschy Trump memorabilia, including plastic figurines of Trump carrying a gun, and he has been a regular visitor to the White House. In March last year, he accompanied his father on a state visit to DC and also attended a dinner at the Brazilian embassy in DC honoring former Trump adviser Steve Bannon. Bannon advised Bolsonaro’s presidential campaign and has been close to the family. Last year, Bannon announced that Eduardo would officially represent South America in The Movement, Bannon’s new organization devoted to spreading right-wing nationalist populism around the globe. Bolsonaro has also paid visits to Trump’s Florida resort, Mar-a-Lago and touts his ties to Don Jr. and Jared Kushner, Ivanka Trump’s husband and the president’s senior adviser.

In November, Augusto Nunes, a right-wing columnist assaulted the US journalist Glenn Greenwald on a live-streamed radio show in Brazil. Greenwald, co-founder of the Intercept, lives in Brazil and has published a number of exposés on the Intercept Brazil on corruption in the Bolsonaro administration and has been a consistent thorn in the side of the president. Nunes had previously made homophobic remarks about Greenwald, who is gay, and Greenwald called him out about it on the show and said Nunes was a coward. At that point Nunes smacked him in the face.

“Glenn Greenwald always said he loved Brazil and wanted to know the country’s depths,” Bolsonaro said gleefully after the news broke. “Maybe he will even know jail.”

Eduardo Bolsonaro defended the columnist for his attack on Greenwald because he did so “in legitimate defense of his honor. He reacted the way any normal person with blood in their veins would have done.” Since then, prosecutors in the country have charged Greenwald with cybercrimes, in a criminal case Greenwald has said is retaliation for his work exposing corruption. “Glenn Greenwald always said he loved Brazil and wanted to know the country’s depths,” Bolsonaro said gleefully after the news broke. “Maybe he will even know jail.”

This month, the Intercept Brazil published a report suggesting that Eduardo was behind a widespread scheme to spread pro-Bolsonaro disinformation on WhatsApp during the 2018 presidential election and more recently has deployed social media networks to attack a journalist critical of the Bolsonaro government.

Bolsonaro’s path to CPAC came through the White House. During one of his visits to the US in early 2019, Bolsonaro met Matt Schlapp, chairman of the American Conservative Union, while staying at Blair House, the presidential guest residence, during his father’s first state visit. (Schlapp’s wife Mercedes Schlapp worked in the Trump White House and now works on Trump’s reelection campaign.) Matt Schlapp has been expanding the reach of CPAC internationally, holding conservative conventions in Australia, Korea and Japan in the past year, with plans for more in places with burgeoning far-right parties and governments such as Hungary.

In October, with help from Bolsonaro, Schlapp brought CPAC to Brazil to help spread the glories of American conservatism. Among the Americans who went south for the junket were Utah Sen. Mike Lee (R), who spoke to the group partly in Spanish, which he’d learned as a Mormon missionary. Other speakers included Christine Wilson, a member of the Federal Trade Commission; James Roberts, an economic research fellow at the conservative Heritage Foundation; and Walid Phares, an Islamaphobic Fox News commentator who worked on Trump’s 2016 campaign. Conservative hedge fund manager Sean Fieler, who has devoted millions of dollars to anti-abortion and anti-LGBT groups, was also on the lineup.

But Bolsonaro was clearly the star of the show. Critics in Brazil complained that for all his attacks on socialism, Bolsonaro used taxpayer money to fund the event, which seemed mostly designed to showcase himself. “Perhaps it is the most important moment of my public life,” he declared of the conservative confab. Bolsonaro appeared on stage at one point in front of a photo of Olavo de Carvalho, a man often dubbed the “intellectual father of the new right” in Brazil who is also close to Steve Bannon.

Carvalho is a self-proclaimed philosopher, a pundit, astrologist, and all around kook who has been called Jair Bolsonaro’s Rasputin, even though he now lives in Virginia. (Along with espousing anti-communist and conservative views through his YouTube channel, Carvalho has spread a number of conspiracy theories, including that Pepsi is sweetened with cells from aborted fetuses, that vaccines are lethal, that AIDS is no threat to heterosexuals and that Barack Obama was not born in the US.)

Bolsonaro highlighted the importance of forging ties with conservatives internationally to help advance right-wing progress across the globe. “The left is much better organized than we conservatives. And it is organized on a global level,” he lamented. “While here in Brazil, we don’t have this whole structure.” Bolsonaro coached the CPAC audience on how to use memes to combat political enemies on social media and leveled attacks on journalists who have been critical of his father’s administration. At one point, Bolsonaro hugged the Brazilian flag as Trump had done at the American CPAC last year. “Guess who I’m honoring?” he said.