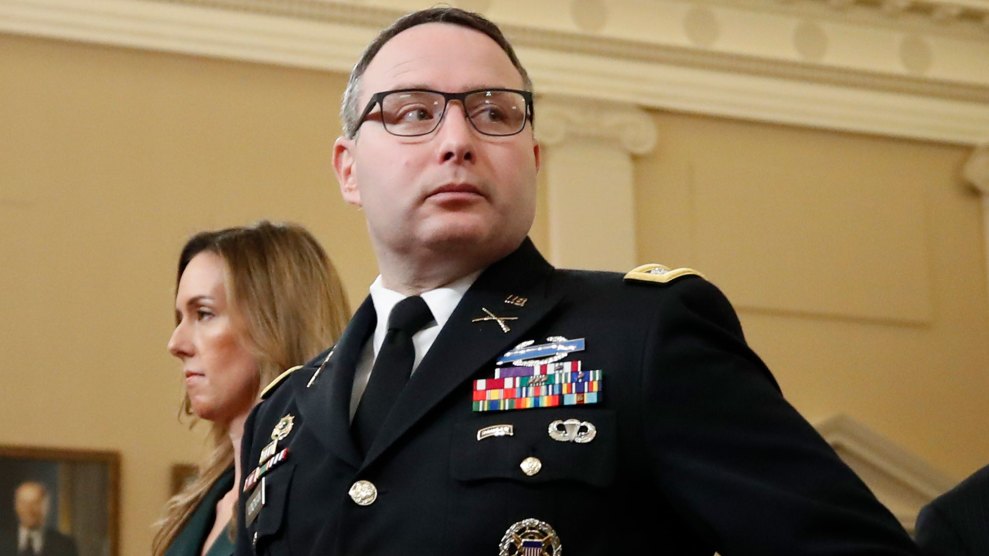 Alexander Vindman testified on Nov. 19 during an impeachment hearing of President Donald Trump's efforts to tie U.S. aid for Ukraine to investigations of his political opponents.Alex Brandon/AP

On Friday, just days after the Senate acquitted President Donald Trump in a swift impeachment trial, White House officials escorted Lt. Col. Alexander Vindman from the premises after he was fired from his position on the National Security Council, an act of apparent retaliation for testifying against Trump during the House’s impeachment investigation, Vindman’s attorney suggested in a statement. It’s unclear where he will be reassigned.

“There is no question in the mind of any American why this man’s job is over, why this country now has one less soldier serving it at the White House,” Vindman’s attorney, David Pressman, said in a statement. Vindman “was asked to leave for telling the truth.”

LTC Vindman escorted from WH, per his lawyer David Pressman: “He followed orders, he obeyed his oath, and he served his country… And for that, the most powerful man in the world – buoyed by the silent, the pliable, and the complicit – has decided to exact revenge.” pic.twitter.com/u0CAB13iln

Vindman, who worked as an expert on Ukraine on the National Security Council, listened in on the president’s July 25 phone call with Ukrainian President Volodymyr Zelensky, during which Trump warned of withholding military aid unless Ukrainian officials investigated Democratic presidential candidate and former vice president Joe Biden, and his son Hunter, for corruption. Vindman testified in November that he “couldn’t believe” what he was hearing on the president’s call with Ukraine and that it “was likely to have significant implications for US national security.” The House later voted to impeach the president on charges of abuse of power and obstruction of Congress, but the Senate voted to acquit the president, with Sen. Mitt Romney as the lone Republican to break party ranks and vote to remove Trump from office.

On Thursday, during a rambling, venting speech, Trump brought up Vindman and his twin brother Yevgeny, who works as a lawyer for the National Security Council. And then earlier during the day Friday before Vindman had been dismissed, Trump told reporters he was “not happy” with Vindman, adding: “You think I’m supposed to be happy with him? I’m not.” The New York Times reported that Yevgeny was also fired.

Senate Minority Leader Chuck Schumer suggested that the ousting of “patriots & whistleblowers like LTC Vindman” was an “extension of President Trump’s cover-up” in the Ukraine scandal.

The Pentagon assured me that patriots & whistleblowers like LTC Vindman will be protected.

Any reprisals against him or others who came forward to tell the truth are wrong and should be seen for what they are: