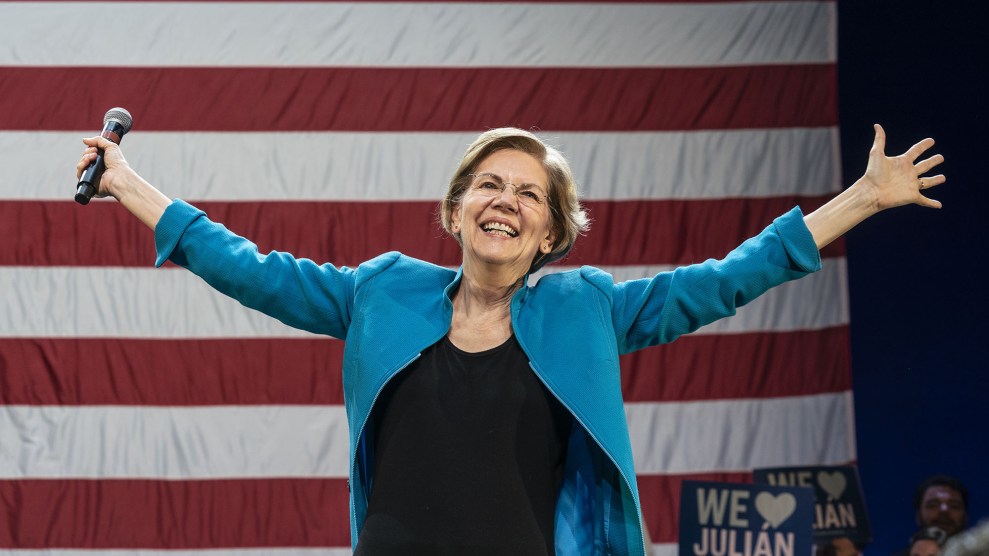 In 2016, Hillary Clinton almost became Madam President. She won the popular vote by 3 million, which is not what I would call a slim margin. She lost the election due to a series of things that, had any one gone slightly differently, might have changed the ultimate outcome: campaigning more in Wisconsin; Bill Clinton; a Russian hack and disinformation campaign; decades of baggage; a bumbling James Comey; a vast web of voting rights infringements. There are others—take your pick. Relitigating all of this is exhausting and it changes nothing at present, but looking at the details does offer evidence of what it looks like for a party to rally behind a female candidate and the power therein. Remember?

Currently, the Twitterverse is locked in another ultimately meaningless debate. This time it’s about who-said-what in a conversation between Democratic candidates Elizabeth Warren and Bernie Sanders. Warren says that Sanders told her he didn’t believe a woman could win the presidency. Sanders said he only pointed out that they were up against “a sexist, a racist, and a liar who would weaponize whatever he could.” It is not hard to imagine that they both may be right. But the disagreement brings to the fore something that both if not almost all campaigns have tiptoed around since the very beginning, while the rest of us debated it out in our living rooms and group texts and Slack channels. Or, in Joe Biden’s case, just…out in the world, without elegance or consideration: “I think there’s a lot of sexism in the way they went after Hillary. I think it was unfair. An awful lot of it. Well, that’s not gonna happen with me.” Sure, dude.

Clearly we’re left with a lot of scar tissue from the previous presidential race, but some folks are taking the wrong lessons away from a scenario that should have taught us to know better. The lesson that came out of 2016 was not that we will not see a woman in the Oval Office in 2020. Rest assured, there are Democrats who have spent the past almost-four years poring over the “what went wrong” of it all, and candidates like Warren are putting that to good use. When in the spring of last year, Warren held a town hall in—of all places—Jackson, Miss., at Jackson State, a historically black college,  it struck me as massively significant. Watching her onstage, carefully explaining her policy ideas early in her campaign, felt like a pledge to not make the mistakes of 2016, and to invest in the people who have traditionally been dismissed by the establishment.

I also don’t think that it’s unreasonable to place some hope in the activating force of rage that has been ignited and steadily stoked within women as they not only watched an immensely qualified woman lose the office to an unqualified, overstuffed reality television meme who can barely string together a coherent sentence, but also have been constantly reminded, on a national scale, of these power structures on the basis of sex ever since: “Grab ’em by the pussy.” The Harvey Weinstein case. The #MeToo movement. An overwhelming onslaught of abortion restrictions. The Kavanaugh hearing. The Kavanaugh confirmation. Stacey Abrams’ Senate loss. E. Jean Carroll’s lawsuit against the president for sexual assault. All of this, and more, coupled with the constant little, exhausting, steady soul-suck of sexism that we encounter in our daily lives (from men, yes, but women, too). I’m not really saying anything that my girl Rebecca Traister has not already said, but my god, people, let’s grow up and have an adult conversation about this that doesn’t dismiss women for every little move they make.

As Traister writes in The Cut today:

What has been exposed here are some of the complicated, painful, difficult dynamics that have kept women from the presidency for the country’s entire history. Among those dynamics is the chilling fact that talking in any kind of honest way about marginalization becomes a trap for the marginalized. To acknowledge the realities of running as a woman — the double standards, the higher bars, the demands for likability and relatability in a nation that mostly only relates to and likes dudes; the need to be authoritative but not hectoring; to be smart but not a know-it-all; to be cool but not fake; to be warm but not a mommy; to be maternal but not too soft; to have the contours of your life, from your breasts to your skin-care routines to your maternity leaves, treated as foreign and weird and maybe counterfeit by a political media that’s never had to take this stuff seriously before; to be honest but not actually tell the truth about any of this stuff because you’ll sound like a whiner — is a trap. You will be understood as trying to leverage the bleak unfairness of it all to your benefit: as if you are the one to enter the arena with the advantage of getting to cry “Sexism!” and not with the multiple disadvantages of … sexism.

And so you can’t really sit down and talk about it, certainly not in a media landscape that trades in sound bites and takes and lethal tweets; you can’t actually meaningfully reveal the things that drive you nuts or that stop you short or shock you into stunned silence, because how can this still be so ridiculously dumb and obviously unjust? To live this, and to not be able to talk about it, and to be regularly warned about it by even well-meaning people who aren’t experiencing it themselves? It must be galling.

I am galled. And tired. But this particular conversation playing out on Twitter—dear god—isn’t helping anyone.