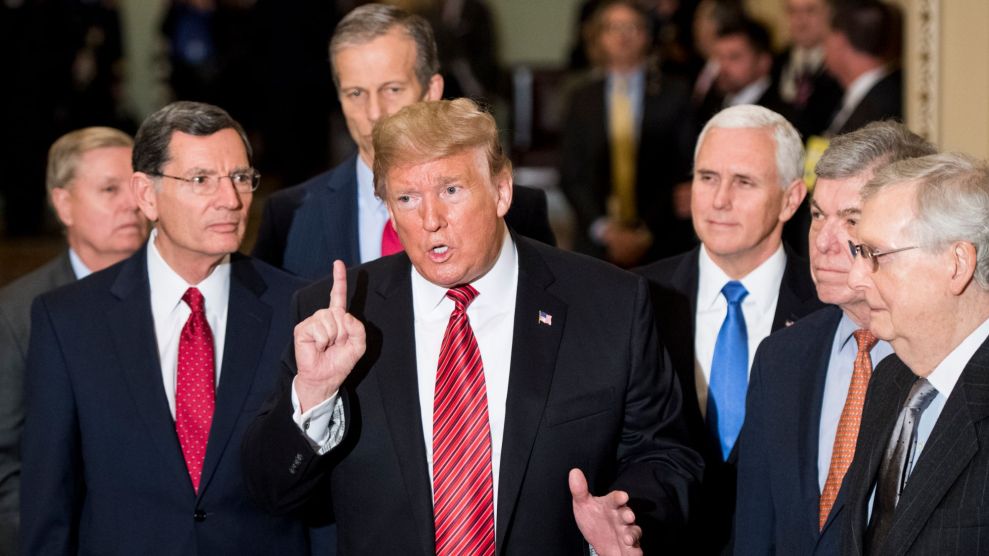 The impeachment trial of Donald Trump was always going to be a fight over reality—and whether reality matters.

There was no true doubt that Trump had committed the wrongdoing that led the House to impeach him. It was clear he had pressured the Ukrainian president Volodymyr Zelensky by withholding a much-coveted White House meeting and $391 million in vital military assistance to compel Zelensky to launch investigations aimed at digging up dirt on Joe Biden and yielding information to boost the nutty and unfounded conspiracy theory that Ukraine, not Russia, had hacked the 2016 US election. There was compelling testimony from officials who were witnesses to this extortion scheme. There were documents, including the White House’s quasi-transcript that showed Trump pushing the Ukrainian leader for the “favor” of initiating these probes. And once the scandal broke, Trump even publicly exclaimed he wanted the Ukrainian government—and the Chinese government—to investigate Biden. His chief of staff, Mick Mulvaney, declared at a press conference that Trump withheld the aid in part to push Ukraine to investigate the baseless Russia-Didn’t-Do-It theory.

Yet Trump and his defenders have denied there was any untoward scheme. They have denied facts. They have denied reality. During the impeachment hearings in the House, Republican legislators insisted that Trump blocked the aid because he was concerned about burden-sharing and about corruption in Ukraine. And they endeavored mightily to distract from Trump’s misconduct by shouting about the Steele dossier, the whistleblower who triggered the Ukraine scandal, Hunter Biden’s work for a Ukrainian energy company, and the baseless notion that Kyiv intervened in the 2016 election. Anything but Trump’s attempt to cut a dirty deal with Ukraine. There was no evidence to support any of their alternative realties—no witnesses, no documents that showed Trump had leaned on the Ukrainians to deal with actual corruption within their ranks or that he had taken any steps to address the issue of burden-sharing.

It was all bunk. Even after Gordon Sondland—the hotelier who donated $1 million to Trump’s inauguration and was rewarded with the ambassadorship to the European Union—testified that there had indeed been a “quid pro quo,” Rep. Jim Jordan (R-Ohio), one of Trump’s loudest and most reality-defying champions, shouted at a reporter (me): “No quid pro quo! No quid pro quo!” It was an unambiguous sign: Trumpers would never recognize any facts or evidence that showed Dear Leader had done anything wrong.

This was a dramatic contrast to the previous presidential impeachment. When Congress pondered what to do about President Bill Clinton’s affair with Monica Lewinsky and his cover-up lies, there was no debate over what had occurred. Democrats did not argue there had been no blow job. They did not insist that Clinton had not lied. They accepted the evidence. They acknowledged the transgression. The question was what to do about all this. Was it impeachable? But Trump’s acolytes turned his impeachment into a battle over whether you could believe your own eyes. They would not concede the established facts. They echoed Trump’s self-serving assessment that his call with Zelensky had been “beautiful” and “perfect.” They railed about Deep State and Ukrainian plots against Trump. They deployed paranoia and diversion to protect their man.

This has been disturbing and unsettling to witness. The founders placed impeachment in the Constitution because they feared that one day a corrupt scoundrel might reach the presidency. But they did not envision that an entire political party might be his accomplice and defender.

Once impeachment moved to the Senate for the trial, the GOP’s deny-reality virus infected that body as well. The president’s legal team—which included two men who had helped sexual criminal Jeffrey Epstein escape justice—advanced the deflect/distract/divert strategy. Trump “did absolutely nothing wrong,” they proclaimed. They staged a cavalcade of gaslighting. The man who launched the last presidential impeachment, Kenneth Starr, argued that impeachment was “hell” and ought to be avoided. The woman who, as Florida attorney general, killed an investigation of Trump after receiving a large campaign contribution from him, Pam Bondi, decried the supposed (and unsubstantiated) corruption of the Bidens. It seemed Trump’s lawyers were engaged in trolling. They railed about the whistleblower, the Steele memos, Ukraine, and the House impeachment process. They threw whatever crap they could at the wall. The point was to confuse and confound.

Then, with the performance of Alan Dershowitz, the heavyweight on Trump’s legal crew, they tied their mess of a case to the big idea that no president can be impeached unless he has committed a crime. Abuse of power is insufficient for booting a chief executive, Dershowitz claimed. That is, Trump could pardon the indicted Russian hackers who attacked the 2016 election, essentially encouraging them to help him once more in 2020, and Congress could not touch him. Trump’s defense squad went from denying reality to denying the fundamental notion, crucial within a constitutional democracy, that the legislative branch can check a president who acts corruptly.

By and large, the GOP cheered. Most Republican senators, through their questions, demonstrated they were untroubled by the facts of the case. Indeed, many presented questions that highlighted the distractions and diversions so often showcased on Fox News. They had willingly put on blindfolds. A president muscling any foreign leader to investigate an American for the president’s own political gain might be considered an abuse of power—even without blocking military assistance to increase the pressure. But none of this seemed to bother many Republican senators. And much of the debate at the trial focused on the trial itself: Would there be witnesses? Process overwhelmed the detailing of Trump’s skulduggery. That was a win for Trump and his happy-to-befuddle attorneys.

There was no desire on the part of the Republican senators, with a few exceptions, to obtain a better understanding of reality. Trump’s lawyers and his supporters on Capitol Hill and within the media had long asserted there was no witness who had testified that he or she had heard Trump directly spell out the aid-for-investigations quid pro quo. Yet when the possibility emerged that a potential witness—John Bolton, Trump’s former national security adviser—could offer precisely such testimony, the Republicans yawned and said, never mind, no thank you. More facts were not needed. Don’t undermine our distractions with actual information. Ignorance is best.

From the start of this investigation—as they did with the Trump-Russia scandal—Trump and the Republicans were hellbent to prevent the true narrative from taking hold. They have spent years doing all they can to make sure Trump’s aiding and abetting of the Russian attack on the United States (which aimed to help elect Trump) did not become an accepted and fundamental element of that controversy. And they did the same with the Ukraine affair: The corruption that actually transpired could not be acknowledged, for then Trump and the Republicans might have to contend with consequence. Debate the facts—define reality to your advantage, no matter how absurd it may seem—and you might be able to escape accountability.

Sen. Lamar Alexander’s impeachment two-step did pierce the GOP bubble. But few seemed to notice. On Thursday night, he announced he would not vote in favor of calling witnesses in the Senate trial. That was a blow to the House impeachment managers, who were still hoping to place Bolton and others, including Mulvaney, on the stand. Alexander’s decision appeared to signal the rest of the proceedings would be pro forma and lead to the inevitable GOP-led vote to keep Trump in the White House. But Alexander noted that the House managers “proved” with “what they called a ‘mountain of evidence'” that Trump had withheld aid, “at least in part,” to pressure Ukraine to investigate the Bidens.

There is no need for more evidence to conclude that the president withheld United States aid, at least in part, to pressure Ukraine to investigate the Bidens; the House managers have proved this with what they call a “mountain of overwhelming evidence.” 3/15

Here was a Republican finally saying that yes, the sky is blue. Up is up. Down is down. But, he added, he didn’t believe that Trump, in an election year, should be impeached for this “inappropriate” action. Still, this was, in a way, a breakthrough. One GOP senator had concluded that the Democrats were right: Trump had engaged in this corrupt scheme. Alexander was also essentially calling Trump, his lawyers, and most of the GOP—who had repeatedly said there was no such plot—liars.

Oddly, after Alexander tweeted his statement, Sen. Lindsey Graham, a Trump pit bull who has refused to concede there was anything improper with Trump’s interactions with Ukraine, tweeted that Alexander had “most likely expressed the sentiments of the country as a whole as well as any single Senator possibly could.”

To those who believe that all was ‘perfect,’ Senator Alexander made reasoned observations and conclusions based on the evidence before him. He called it as he saw it to be.

Hold on, fella. Graham was endorsing Alexander’s view that held Trump had engaged in serious wrongdoing? Probably not. But the reality-distortion field within the GOP is so strong that often Trumpers do not even realize when they unintentionally acknowledge the truth. Alexander’s move did raise the prospect of whether any other Republican senators would join him in accepting the House manager’s case but deciding Trump ought not be booted out of office. If so, one potential ending to the Trump impeachment drama could be half the Senate affirming that he did abuse his power and engage in serious misconduct.

A democracy can only effectively function on the basis of good information. If reality is not recognized and accepted, a nation cannot have the debates and discussions necessary for making the best decisions for its citizenry and the future. Authoritarians have long known that controlling the narrative is key to political control. The Trump impeachment trial was a test of the American system. Could the politicians in charge handle the truth, evaluate it fairly and reach a reality-based conclusion (which could still allow for a vote not to remove Trump)? The Republicans failed. Instead, they rallied for Trump; they renounced reality. Their action was in synch with how George Orwell in 1984 described the most important need of an authoritarian political party: “The party told you to reject the evidence of your eyes and ears. It was their final, most essential command.” That was the GOP playbook for the Trump impeachment. This trial was a measure of whether truth could triumph over political hackery and the authoritarian impulse that Trump has injected into the Republican Party, and the Republicans have convicted themselves.