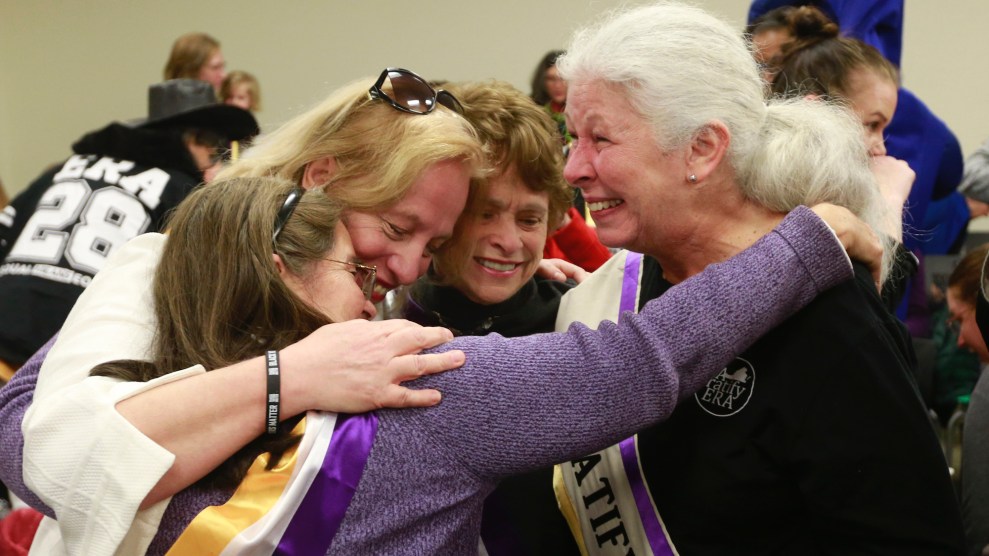 Since Congress passed the Equal Rights Amendment in 1972, the proposal to enshrine gender equality in the Constitution has languished in state legislatures, failing to rack up the approvals in the three-quarters of states required of Constitutional amendments—until now. On Wednesday, Virginia became the 38th state to pass a resolution to ratify the ERA in its newly elected Democratic state legislature.

The significance of the ERA lies in its power to strengthen existing anti-discrimination laws—on issues like pay equity, sexual violence, and pregnancy discrimination—by giving them the weight of a constitutional amendment that cannot easily be repealed, amended, or weakened in the courts, its proponents argue.

But the victory, for now, is mostly symbolic. The deadline for 38 states to ratify the amendment passed in 1982, and in the intervening years, five states have rescinded their earlier approvals. These complications mean that the ERA still faces significant hurdles before it could be added to the Constitution, including potential years of legal battles. In a recent opinion, the Justice Department stated that its belief that the deadline to add the ERA to the Constitution had passed.

As my colleague Olivia Exstrum reported, the old battles over the ERA have been revived in recent years as women’s groups have strategized to reenergize the older movement. Their efforts have been fruitful: In 2017, Nevada voted to ratify the amendment. In 2018, Illinois followed suit. Both were part of a modern “three-state strategy” to move the amendment forward.

The ERA, which says simply “equality of rights under the law shall not be denied or abridged…on account of sex,” was passed by Congress in 1972, at the height of the women’s movement. The proposal’s passage was a joint effort by feminists and labor groups like the American Federation of Labor and Congress of Industrial Organizations. In her testimony before the Senate in favor of the legislation, feminist Gloria Steinem declared, “Women suffer this second-class treatment from the moment they are born.” Supporters erupted in cheers in the Senate gallery when it was passed.

Because it would have changed the Constitution, the proposal went to the states for ratification after Congress approved it. States had 10 years to pass the amendment, but conservatives and anti-feminist activists, led by the late activist Phyllis Schlafly—who claimed, among other things, that women would lose financial support from their husbands if the ERA was passed—fought fiercely against it. By the time the 1982 deadline rolled around, only 35 states had ratified—three short. The amendment was dead.

But the ERA’s demise never deterred women’s groups from trying to restart the conversation. At least 10 state legislatures, backed by the ERA Coalition (which counts Steinem as a board member) and smaller state groups like the Virginia-based Women Matter, have introduced bills to ratify the ERA in the years since it was first approved. They’ve focused on the so-called “three-state strategy”: if they can get three more states to pass the amendment, they’re hoping Congress will recognize the ratifications that occurred after 1982 as valid and let it pass.

Now, it may now be up to Congress to recognize the late ratifications and push the amendment process forward, according to Julie Suk, a professor at the City University of New York who is writing a book about the ERA.

“I think there’s a very strong political and moral argument,” Suk says. “It’s taken a generation 100 years to get the ERA because there are obvious challenges to getting equal rights when you don’t have equal rights. If Congress were to say ‘follow the rules, sorry you were late,’ I think they would be rejecting 100 years of effort by women.”