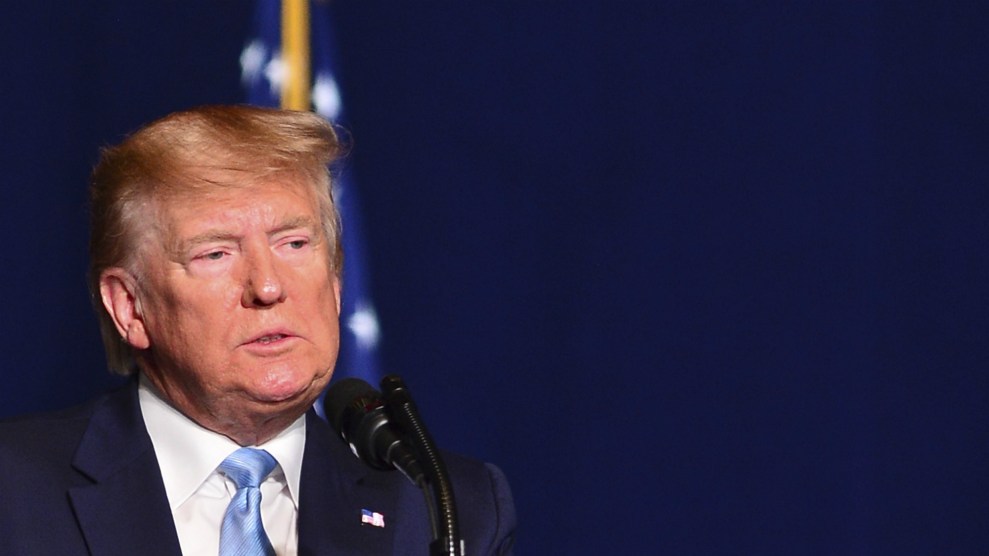 One of the many critiques of President Donald Trump’s handling of Iran over the past week is that he made the huge decision to assassinate Iranian general Qassem Soleimani without understanding much—or anything—about Iran’s internal politics or Soleimani’s place in the world. Four years ago, Trump seemed completely unaware of the Quds Force, the elite branch of Iran’s Islamic Revolutionary Guard Corps run by Soleimani. But Trump should have been very familiar with the Revolutionary Guard—because his own business had close ties to it.

In 2012, Trump signed a deal to develop a luxury hotel in Baku, the capital of oil-and-gas-rich Azerbaijan. His business partners on the project presented a range of problems. First off, as Mother Jones detailed in 2015, Azerbaijan is regarded as one of the most corrupt countries in the world, and Trump’s partners were relatives of Ziya Mammadov, the country’s transportation minister and a former Soviet apparatchik with a $12,000 annual salary who had still managed to amass billions in personal wealth.

And then there’s the matter of Iran. According to an excellent 2017 Adam Davidson investigation in the New Yorker, the Mammadov family appears to have had close business ties to construction companies controlled by an associate of the Revolutionary Guard:

In 2008, the year that the tower was announced, Ziya Mammadov, in his role as Transportation Minister, awarded a series of multimillion-dollar contracts to Azarpassillo, an Iranian construction company. Keyumars Darvishi, its chairman, fought in the Iran-Iraq War. After the war, he became the head of Raman, an Iranian construction firm that is controlled by the Revolutionary Guard.

Davidson found that there were more than just passing links between Keyumars Darvishi and the Guard:

At least three Darvishis—the brothers Habil, Kamal, and Keyumars—appear to be associates of the Guard. In Farsi press accounts, Habil, who runs the Tehran Metro Company, is referred to as a sardar, a term for a senior officer in the Revolutionary Guard. A cable sent on March 6, 2009, from the U.S. Embassy in Baku described Kamal as having formerly run “an alleged Revolutionary Guard-controlled business in Iran.” The company, called Nasr, developed and acquired instruments, guidance systems, and specialty metals needed to build ballistic missiles. In 2007, Nasr was sanctioned by the U.S. for its role in Iran’s effort to develop nuclear missiles.

The brothers were awarded at least eight major road projects in Azerbaijan in the years before the Trump hotel tower in Baku was constructed, and a leaked US diplomatic cable from 2009 noted drily, “We assume Mammedov [sic] is a silent partner in these contracts.”

The Trump Baku project was one of a slew of pricey investments that the Mammadov family made around the same time—investments that didn’t quite add up, according to Davidson:

Between 2004 and 2014, Mammadov family businesses spent more than half a billion dollars on large construction projects. They also poured money into a major construction-materials company, an insurance firm, and a new headquarters. It’s not clear how the Mammadovs funded such enormous investments while spending so much on themselves. They may have received loans, or secretly owned profitable businesses that supported the flurry of spending. Another explanation is that some of the investment money came from the Revolutionary Guard, through Azarpassillo.

Davidson’s investigation details a litany of red flags about the Baku project that would have been hard for the Trump family to ignore, including duffel bags stuffed with millions of dollars in cash paid to contractors. But the Trumps claimed never to have noticed anything amiss. A Trump executive told the New Yorker that the company did due diligence on the Mammadovs, but wouldn’t reveal who did the background check or what the results were.

The current Iranian crisis aside, the Foreign Corrupt Practices Act prohibits Americans from being involved with corruption overseas or partnering with people who are involved with corruption, so the Trump Organization certainly had a motive to look into the Mammadovs more closely. Davidson noted that it would have been hard to miss the connection to the Revolutionary Guard.

Under the terms of the contracts signed between the Trump Organization and the Mammadovs, Trump didn’t have to build or own the tower that would bear his name in Baku, but he was paid a licensing fee, and the Trumps were hired to manage a hotel that was set to operate in the building. After he was elected president, Trump pulled out of the deal—which appeared to be dead in the water anyway—but he still earned at least $2.8 million from the early work on the deal. The Trump family claimed to have kept the project at arm’s length, but according to Davidson’s sources, the family, in particular Ivanka Trump, was intimately involved with the most minute details, going far beyond the usual oversight a licensing company might offer:

The Azerbaijani lawyer said, “Ivanka personally approved everything.” A subcontractor noted that Ivanka’s team was particular about wood panelling: it chose an expensive Macassar ebony, from Indonesia, for the ceiling of the lobby. The ballroom doors were to be made of book-matched panels of walnut.