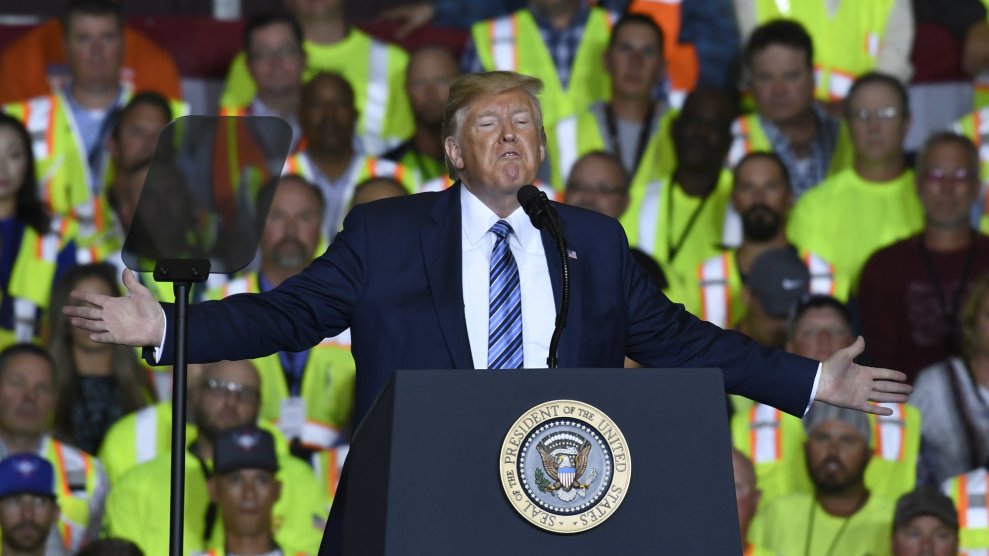 Ahead of Super Bowl LIV, with an anticipated 100 million viewers, President Donald Trump debuted his new TV ad on Thursday that features footage from a speech at a Pennsylvania petrochemical plant where workers were forced to attend—or risk not getting paid.

The 30-second ad, which is one of two that are set to air during the Super Bowl on Sunday, proclaims that Trump has made the country “stronger, safer, and more prosperous than ever before,” while clips of the president at various campaign rallies and speeches are spliced together like a highlight reel. Fifteen seconds in, however, the ad features footage from what appears to be a rally in a big warehouse. Trump is shown speaking at a podium against the backdrop of dozens of people standing on risers behind him wearing bright yellow safety vests, with a massive American flag draped behind them.

That footage appears to come from a speech that took place on August 13 at a petrochemical plant operated by Royal Dutch Shell in Beaver County, Pennsylvania, where workers were told that if they did not show up, they would not get paid, according to the Pittsburgh Post-Gazette.

From different footage of that speech, here’s a screenshot from a wider angle from what is featured in the Super Bowl ad:

Based on the sea of workers in yellow safety vests, the placement of the massive American flag, and the warehouse setting, it is clear that the setting is the same, an unusual choice to serve as an example of Trump support.

Here’s the backstory. In the days before the speech, thousands of union workers at the plant were given an option about showing up for work that day. From the Pittsburgh Post-Gazette:

The choice for thousands of union workers at Royal Dutch Shell’s petrochemical plant in Beaver County was clear Tuesday: Either stand in a giant hall waiting for President Donald Trump to speak or take the day off with no pay.

“Your attendance is not mandatory,” said the rules that one contractor relayed to employees, summarizing points from a memo that Shell sent to union leaders a day ahead of the visit to the $6 billion construction site. But only those who showed up at 7 a.m., scanned their ID cards, and prepared to stand for hours — through lunch but without lunch — would be paid.

“NO SCAN, NO PAY,” a supervisor for that contractor wrote.

A spokesperson for the union representing most of the workers, Steamfitters local 449, said that they were consulted about the speech and the attendance policy and “went along with it.” Not all union leaders said they were consulted about it, though. One told the Pittsburgh Post-Gazette anonymously that missing out on “one day of work might amount to about $700 in pay, benefits and a per diem payment that out-of-town workers receive.”

During the speech, Trump praised the extraction of natural gas in Appalachia, criticized the media, bashed Democratic presidential challengers, and threatened union leadership, saying that if they didn’t support him, Shell workers should “vote them the hell out of office.”

The TV ad released on Thursday is one of two ads the Trump campaign reportedly spent $11 million on. Also appearing that night will be a 60 second ad that Mike Bloomberg’s campaign has planned.