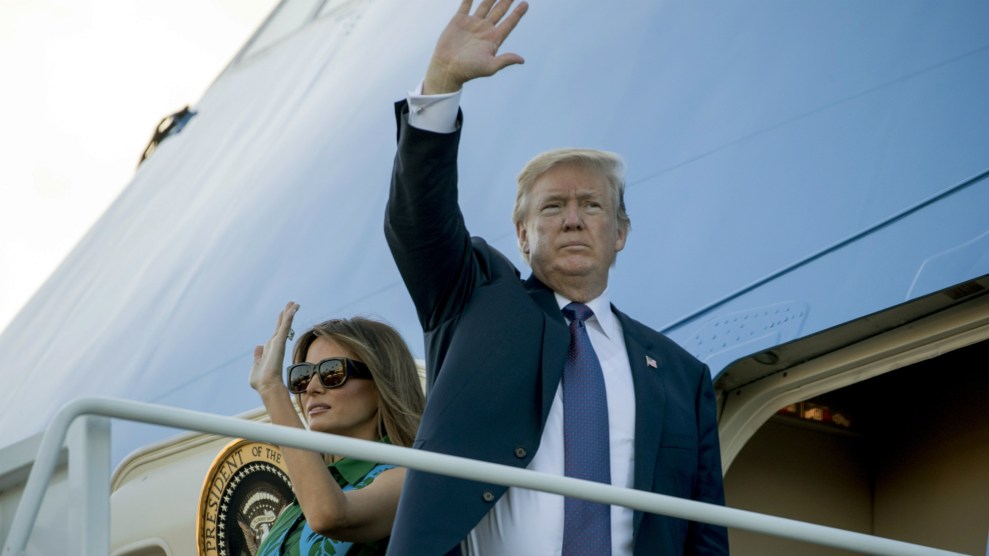 For years before he ran for president, Donald Trump complained incessantly about how much money was being spent on Secret Service protection for Barack Obama and his family as they traveled.

While campaigning, Trump insisted he would rarely travel or vacation—he would be too busy, he said. Instead, Trump has spent an enormous amount of time on vacation. He golfs far more than any previous president, usually at one of his own golf courses. The bills for all that travel for Trump and his family, including his adult children, have piled up, particularly the costs for the Secret Service to protect the first family. Shortly after Trump took office, Donald and Eric Trump took a string of trips to visit one of their father’s business partners that cost taxpayers $230,000 to send the Secret Service along with the brothers. Bills like that have become almost routine: Last spring, Tiffany Trump decided to visit Cannes, France, and it cost taxpayers more than 22 grand on hotel rooms alone for Secret Service agents, on top of their wages and flights. The Secret Service has spent nearly $770,000 keeping up with Trump on golf trips—renting golf carts, setting up barricades to protect the president as he plays, etc.

No one knows exactly how much Trump’s travel has cost the nation. And we’re not about to find out.

Congress asked for solid numbers, but Treasury Secretary Steve Mnuchin is attempting to stonewall Congress on the total tab for Secret Service agents to follow the Trumps. Lawmakers are considering legislation to move oversight of the Secret Service back to the Treasury, where it began as an anti-counterfeiting force before it was transferred to the Department of Homeland Security in 2003. According to the Washington Post, Mnuchin has agreed to a provision of the bill that requires disclosure of the presidential travel costs—but only if the figures come out after the 2020 election.

Mnuchin has been silent on why he’s insisting the numbers be held back, but it’s not hard to guess that, given the piecemeal numbers that have emerged, the sum total will be astronomical. How astronomical? According to a Government Accountability Office report from last year, just one month of Trump travel cost $13.6 million in 2018—a figure that includes the total cost of protecting the president, not just Secret Service costs. It’s not a great look for a president who was so hypercritical of his predecessor’s comparatively thrifty habits.