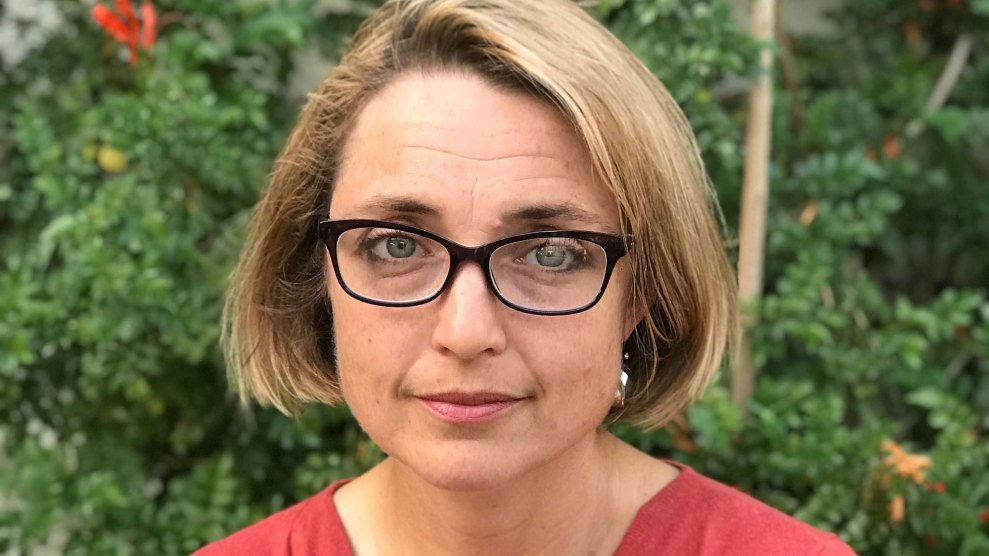 The first time I ever spoke with Courtney Everts Mykytyn, she was distracted.

I’d called her one afternoon in February 2017 to learn about her decision, years earlier, to place her two white children in a public school in Los Angeles where most of the students were from working-class Latinx families. I was also hoping to discuss the group Courtney founded in 2015, called Integrated Schools, to help privileged parents across the country make similar decisions — to become, in essence, agents of integration.

But Courtney was preoccupied. A family at her children’s middle school had lost their housing; now, one of the parents, an undocumented immigrant, was considering moving the children to Mexico. Courtney, whose son had been friends with one of the children since kindergarten, had been discussing the situation with other parents. Yet a language barrier separated Courtney and the family, and she wasn’t sure how to help.

“When we talk about integration being tricky,” Courtney told me that day, “this is one of those times.”

As an integration advocate, Courtney’s work was twofold. First, she had to help parents with the luxury of many options see the value in public schools that others might dismiss as “under-resourced,” “struggling,” or simply “bad.” Next, she had to convince them to join those schools, not as “saviors,” but as members of a school community committed to the best interests of all students.

That choice would lead to uncomfortable situations like the one Courtney found herself in that afternoon, and invite many missteps, which Courtney was not afraid to admit. But, she insisted, the decision to integrate schools with humility and respect was also a way to work toward a more equitable society.

“What’s the world you want your child to be an adult in?” she would ask parents searching for schools. “Because you’re building it right now with the choice you make.”

Courtney’s life ended abruptly on Dec. 30 after she was hit by a car outside her home, according to her husband, Roman Mykytyn. She was 46, and with her husband had two teenage children.

She also left behind a far-flung network of parents and advocates who considered her an ally and beacon in their fight for equitable, racially integrated schools. Scores of people across the U.S. and abroad posted remembrances on Facebook, including one woman who said Courtney “has inspired and given me courage in my own struggles as an integrating parent.”

Integrated Schools, which began with a few blog posts and phone calls to advice-seeking parents, has grown into a national nonprofit with a diverse board of directors and parent volunteers, a vibrant online community, a popular podcast, and nearly 20 local chapters spanning the country from Atlanta to Seattle.

“This is a testament to the force of nature that was Courtney Mykytyn: She turned one idea into a pulsing, living, breathing group of organized people,” said Anna Lodder, Courtney’s friend and a member of Integrated Schools’ parent board. “Even if it takes 13 of us to do what one of her did,” Lodder added, “we are desperately committed to the legacy of Integrated Schools and keeping the lights on.”

At the time of my first call with Courtney, I was writing about the backlash against a plan to send some wealthy students to a high-poverty school in New York City. Meanwhile, Courtney was urging privileged parents to voluntarily integrate such schools, one student at a time. That spring, I flew to Los Angeles to meet her.

Courtney picked me up in her blue Honda Pilot. She was hilariously self-deprecating. She joked about being the type of mom who brings hummus to children’s birthday parties, and insisted — only partly in jest — that much of her advocacy took place in line at Target.

As we toured her neighborhood, she shared her own integration story. In the late 2000s, Courtney and her husband were debating where to enroll their son in kindergarten. They lived in in Highland Park, a working-class Latinx enclave in the throes of gentrification. Many of their white neighbors sent their kids to distant private or charter schools. “That really just pissed me off,” Courtney recalled. “You’re not too good to live here but you’re too good for the schools?”

So Courtney did what many newcomers in gentrifying neighborhoods do: she banded together with other middle-class parents. Together, they lobbied the district to create a program at nearby Aldama Elementary School where English- and Spanish-speaking students would learn in both languages.

By the time of my visit in 2017, Aldama’s dual-language program was well-established, thanks largely to the dedication of teachers like Angelina Sáenz. The school had become more racially and economically diverse, which research has shown can boost students’ learning and bring new resources.

Yet the demographic changes also introduced new challenges, as I described in a Mother Jones article about Courtney and her work. I learned about a divide between the dual-language program, which enrolled most of the school’s white and middle-class students, and the traditional classes. Even within the program, families from different backgrounds struggled to form bonds.

Courtney could have glossed over the messier details of integration. Instead, she catalogued her own perceived mistakes: rallying her peers to enroll en masse at the same school, pushing for a special program for their children, and prioritizing fundraising over relationship-building. “When we started filtering in, we did everything wrong,” she once told some members of Integrated Schools.

Through her organization, she shared her hard-won realizations with anyone who would listen. She explained how the low test scores and lousy reputations that so often stigmatize schools serving mostly low-income students of color can overshadow their many strengths. But the heart of her work became helping privileged parents who enrolled at such schools do so “intentionally, joyfully and humbly,” as her website put it.

To that end, Courtney spent hours on the phone with individual parents and hosted virtual support groups for white parents from all over the country, where they explored their own biases and privileges — and how to check them at the schoolhouse door.

During the video conferences I observed, parents discussed how racism had skewed their perceptions of “good” and “bad” schools. They considered how to contribute to their schools without dominating the PTA or benefitting only their own children’s classrooms. And they acknowledged how difficult it can be to partner with other parents across cultural lines, and to ignore the judgement of peers who question their choice of schools.

“It’s really hard,” Courtney said during one meet-up, “but it’s worth it.”

Matt Gonzales, an educator and Integrated Schools board member, said white parents can create new inequities inside schools if they pursue their own agendas instead of partnering with people of color. Courtney pushed her fellow white parents to reflect on their actions so they would avoid reinforcing racism at school, he said.

“There’s a power that white folks have in speaking with other white folks,” said Gonzales, who directs the Integration and Innovation Initiative at New York University.

Today, Courtney and Roman’s two children — their 17-year-old son and 14-year-old daughter — attend the local public high school, where just 3% of students are white. In an interview Sunday, Roman said the children will always remember that their mother lived her values.

“They would say she cared,” Roman said, “and she did something about it.”

During my many conversations with Courtney, we would inevitably return to why she did the work. Why devote so much energy to individual parents’ school choices instead of structural changes — perhaps to housing policy or school district boundaries — that could make a bigger dent in segregation?

She had spent years considering her reasons. One was that privileged parents bolster an unequal system when they choose schools where resources are “hoarded” and spurn ones where poverty is concentrated. With help, they could decide to disrupt that system. Another argument was that the network of parents she was connecting could become a small but vocal constituency that would endorse policy changes and promote examples of successful school integration.

Near the end of my reporting trip in 2017, I caught a glimpse of what integration looked like at the middle school where Courtney’s son was about to complete eighth grade.

That afternoon, Courtney and a small group of parents, some eighth-graders, and their teacher were discussing plans for the graduation ceremony. The classroom door was propped open to let in the cool breeze. Courtney’s son, the only white student, snacked on Cheetos and cracked jokes with his friends. The students alternated between Spanish and English as they brainstormed ideas for the event. As the meeting ended, Courtney and another parent embraced.

Thinking back on that afternoon brings to mind an essay Courtney wrote last year. In it, she makes a moral and political case for integration, while remaining honest about the challenges. But she also emphasizes the profound rewards, like the little moments of connection I observed in her son’s classroom.

“Our experience has been transformative,” she wrote, “and while it has not always been easy or comfortable, we are grateful.”