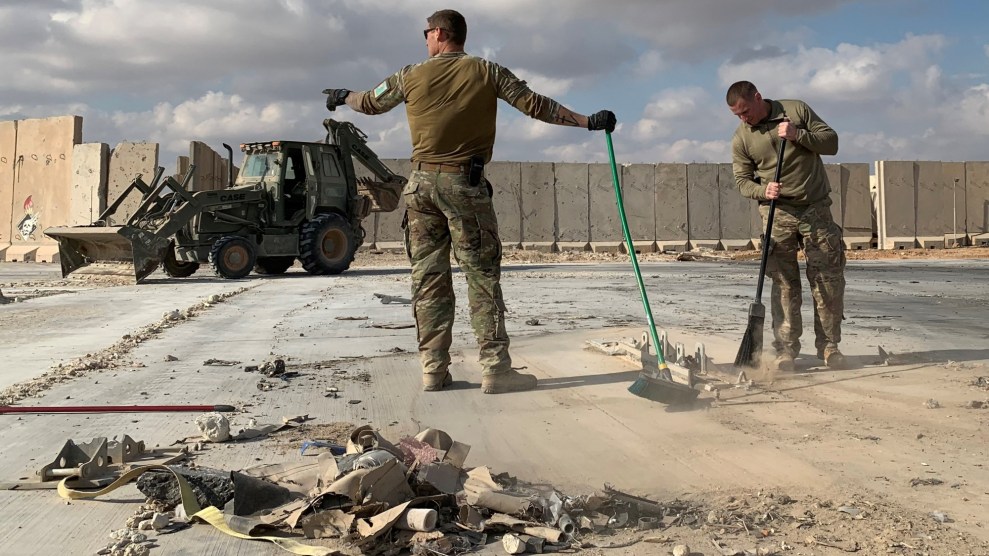 US soldiers clear rubble at Ain al-Asad military base after Iran fired a series of ballistic missiles at it in January 2020.Ayman Henna/AFP/Getty

At least 34 US service members were diagnosed with traumatic brain injuries after Iran fired missiles on two military bases in Iraq, the Pentagon confirmed Friday. That new figure, more than tripling the 11 head injuries acknowledged by military leaders last week, further undermines President Donald Trump’s initial boast that “no Americans were harmed” by the attack.

Only yesterday, Trump refused to revise that false assessment, telling reporters in Switzerland that the injured troops “had headaches, and a couple of other things,” and adding, “It is not very serious.” The injuries in this particular case were serious enough that at least eight affected service members had to be sent back to the United States for treatment while others received medical attention in Germany and Kuwait, Pentagon spokesperson Jonathan Hoffman said.

More injuries could still be revealed. The symptoms for a traumatic brain injury, or TBI, tend to take days to reveal themselves and even then, TBI “may be under-reported, due to fear of stigma,” a Center for a New American Security report found in 2018.

As I wrote yesterday:

More than 408,000 service members have been diagnosed with a serious brain injury and the actual number of personnel affected is probably much higher, the Military Times reported. Part of the problem is a stigma among service members against reporting head injuries, but the military itself also has not always rigorously tested for them. “Before June 2010, TBI screening was not routinely implemented in Afghanistan or Iraq, and there were no standardized provisions for recurrent TBI prevention or treatment,” a 2017 study found. “Return-to-duty decisions were generally left to line commanders, not medical providers. Thus, many injuries were not immediately reported.”

Trump, unwittingly or not, fed into that stigma yesterday by downplaying the importance of head injuries relative to other effects of war. “I’ve seen people with no legs and with no arms,” he said. “I consider them to be really bad injuries.” He’s made comments like this before, usually on the campaign trail and in the context of NFL players suffering concussions—which he called “a little ding on the head.” That argument was not received well by many who seen seen the effects of TBI in the military up close.

@realDonaldTrump dismissive language aimed at our TBI injured from the Iranian missile attack he provoked is appalling and is yet another reminder of his insulting behavior directed at our military. And the GOP is as ever in follow and support. Vote Democratic! We need a change.

Potential traumatic brain injuries should be taken VERY seriously. I hope these men & women get the treatment they need and that our President will understand these injuries often have long-term consequences. https://t.co/x7Cps6xZLX

Of all my husband’s injuries (Infantry 10th IED blast, Iraq) TBI is the most life changing. It impacts us each day, even 12 years later. Mistakenly thinking it wasn’t serious & sending him back out over and over is exactly what caused so much cumulative damage in the last blast.

Given that reaction, the military has been loathe to address Trump’s comments. When asked yesterday about Trump describing brain injuries as “not very serious,” Secretary of Defense Mark Esper demurred. “Those are typically things we don’t report.” he said. “This is mostly outpatient stuff. So we can track that if—if you’re really interested in it.” Reporters remained interested and so did Congress.

Rep. Bill Pascrell (D-N.J.), founder of the Congressional Brain Injury Task Force, wrote to senior Pentagon leaders in the hours after Trump’s remarks demanding that they avoid minimizing the importance of head injuries. “Brain injuries are serious and can often be life-altering,” he wrote, according to a copy of the letter obtained by the Hill. “We cannot and must not go backwards. It is critical that the Department of Defense strongly affirm its commitment to prevention, treatment, rehabilitation, and research regarding concussion and brain injury.”

As several veterans and journalists noted this week, the military has worked in recent years to better identify and treat TBI. But then, as one defense reporter wryly noted, “Trump says something like this.”