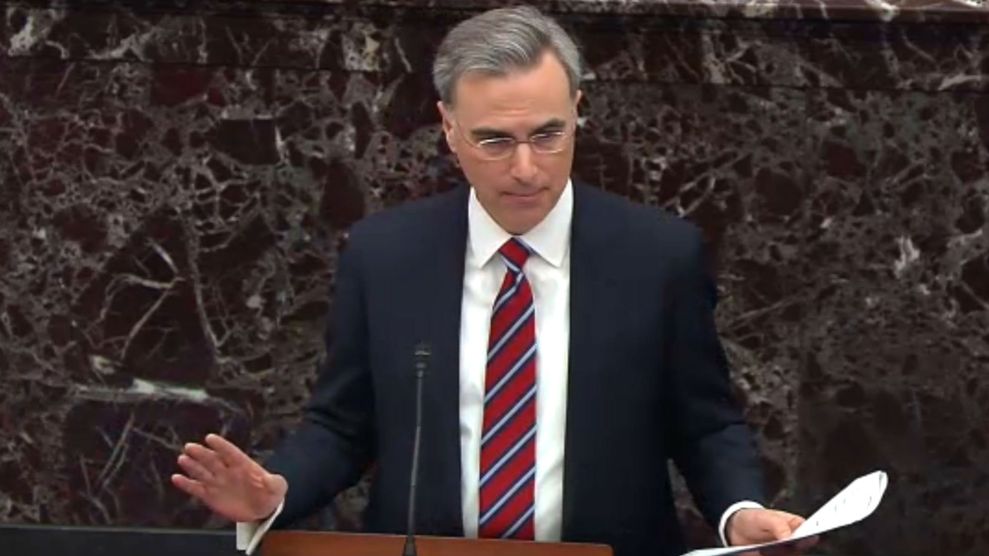 Of all the whoppers President Donald Trump’s lawyers jammed into their relatively brief launch of his defense Saturday, White House Counsel Pat Cipollone may have made the most brazen claim. Cipollone, in his opening remarks, said House impeachment managers “hid evidence” from the Senate during their three days of presenting arguments for Trump’s removal.

What he meant, ensuing arguments showed, is that Democrats did not present information that Trump’s lawyers claim exonerates the president. It is, of course, not the responsibility of prosecutors to mount a defense, nor is not mentioning something “hiding” it.

But Cipollone’s remark isn’t just wrong but a breathtaking example of hypocrisy.

This is the man who personally oversaw Trump’s complete stonewalling of the House’s impeachment inquiry. Cipollone wrote the October 11 letter, widely mocked for its partisan tone and dearth of legal reasoning, in which he flatly refused to provide any evidence the Democrats’ sought. “Trump and his Administration cannot participate in your partisan and unconstitutional inquiry under these circumstances,” he wrote. And Cipollone has overseen the administration’s battle in court to stop the House from enforcing subpoenas. This all out stonewalling of congressional oversight, which critics call unprecedented, resulted in Trump’s impeachment for obstruction of justice.

Democrats have accused Cipollone of personally hiding evidence given his “instrumental role” in Trump’s efforts to obstruct the investigation and his knowledge, as White House counsel, of concerns raised by White House aides about Trump’s conduct toward Ukraine. These factors make him a “material witness” to the charges against Trump, Democrats have argued. “You must disclose all facts and information as to which you have first-hand knowledge that will be at issue in connection with evidence you present or arguments you make in your role as the President’s legal advocate,” Democratic impeachment managers wrote in a letter Tuesday to Cipollone, “so that the Senate and Chief Justice can be apprised of any potential ethical issues, conflicts, or biases.”

On Tuesday, Cipollone and his team argued in favor of a series of votes in which Senate Republicans rejected Democratic amendments that would have forced the Senate to seek documents and testimony from witnesses such as White House Chief of Staff Mick Mulvaney and former White House National Security Adviser John Bolton, who have first-hand knowledge of Trump’s actions. On Saturday, in an impressive display of chutzpah, Trump’s attorneys then cited the absence of eyewitnesses to argue for Trump’s innocence.