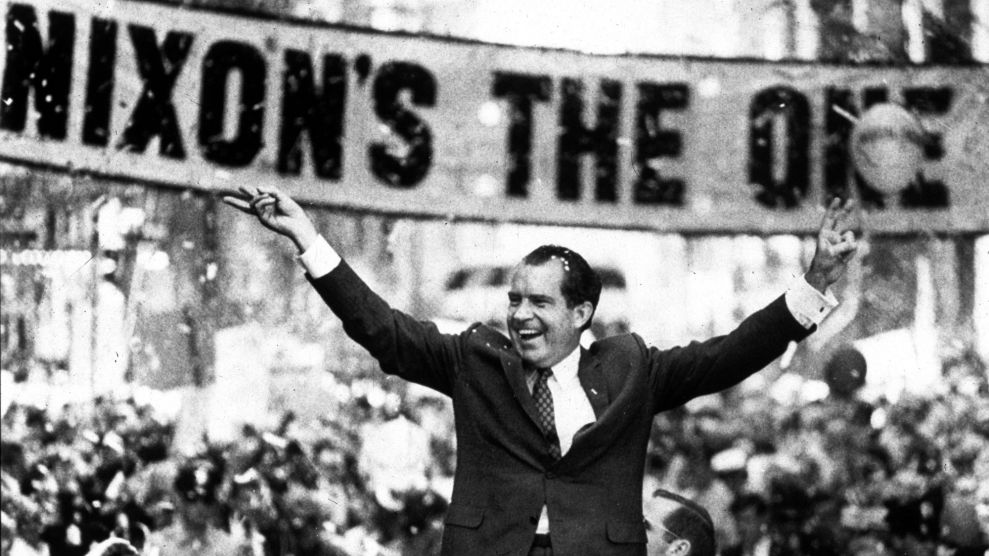 In September 2017, a former White House aide offered a novel defense for the Trump team’s secret contacts with the Russian government: Richard Nixon did it, too.

It is jaw-dropping that McFarland cited Nixon’s act of betrayal to justify the Trump team’s conduct.

That’s what K.T. McFarland told the FBI when asked about Michael Flynn’s efforts during the presidential transition period to meddle in US foreign policy by negotiating with the Russian ambassador behind the Obama administration’s back. According to McFarland, the actions taken by Flynn—who Trump had tapped to become national security adviser—were not unusual because other former presidents, including Nixon, also interfered in foreign policy before taking office.

McFarland, who briefly served as deputy national security adviser, cited Nixon’s “involvement in Vietnam War peace talks” in 1968—along with Ronald Reagan’s alleged pre-election interference in 1980 in talks aimed at freeing US hostages in Iran—as “precedent for proactive foreign policy engagements by an incoming administration,” according to an FBI summary of investigators’ 2017 interview with McFarland, published last week by Buzzfeed.

McFarland’s assertion hasn’t drawn much notice, but it should. Flynn admitted to secret transition-period contacts with Russian ambassador Sergey Kislyak in which he sought to temper Russia’s response to sanctions imposed by the Obama administration to punish Russia for interfering in the 2016 election. In his guilty plea, Flynn admitted that he also called Kislyak and officials from other countries to lobby against a UN resolution condemning Israeli settlements in the West Bank after news reports indicated that the Obama administration would not oppose the measure. Special counsel Robert Mueller’s April 2019 report says Jared Kushner, Trump’s son-in-law, oversaw the latter effort. These contacts may have violated the Logan Act, a 1799 law that bars private US citizens from acting to “influence the measures or conduct of any foreign government” in a dispute with the United States or “to defeat the measures of the United States.” Flynn pleaded guilty in December 2017 to lying to FBI about this activity. He is scheduled to be sentenced later this month.

To summarize: To justify potentially illegal secret contacts between the Trump team and Russia, McFarland, who herself worked on Nixon’s National Security Council, cited perhaps the most notorious example in US history of a White House candidate undermining the diplomacy of a siting president. (McFarland’s comparison is also flawed because Nixon’s interference, and the Reagan team’s alleged actions, occurred prior to Election Day, not during the transition.)

While allegations that Reagan aides meddled in hostage negotiations in Iran remain disputed, Nixon’s secret disruption of Vietnam peace talks is well-documented. Recently revealed notes show that in October 1968, Nixon asked H.R. Haldeman, who became his chief of staff, to “monkey wrench” talks between the United States, South Vietnam, and North Vietnam and to instruct an emissary, Anna Chennault—a prominent Republican and socialite in touch with South Vietnamese negotiators—to urge them to “hold on” and refuse to agree to a deal in hopes of getting better terms under Nixon. Nixon feared that progress in talks would help his Democratic opponent, Vice President Hubert Humphrey, who surged late in the race as he amped up his criticism of the war.

Nixon’s skullduggery worked for Nixon. Encouraged by him, the South Vietnamese stalled the talks, and Nixon narrowly beat Humphrey. But the consequences were bad for everyone else. Nixon had suggested he had a plan for exiting Vietnam. Instead he expanded the war. Roughly 22,000 more Americans, along with far more Vietnamese, would die before the US finally withdrew from the country at the start of Nixon’s second term in 1973. Nixon’s initially secret bombing of sites in Cambodia in 1969 may have helped spur the rise of the Khmer Rouge, who went on to kill an estimated 2 million Cambodians.

Nixon’s predecessor, Lyndon Johnson, knew of Nixon’s actions and privately called them “treason.” John Farrell, who discovered Haldeman’s notes while researching a 2017 Nixon biography, told Mother Jones that Nixon’s interference was potentially “worse than anything he did in Watergate, because more lives were at stake.”

Yet according to the FBI’s summary, McFarland, who did not respond to requests for comment, cited Nixon’s actions to defend Flynn’s December 2016 contacts with Russia.

McFarland knew of Flynn’s contacts with Kislyak in advance. In a court filing Tuesday ahead of Flynn’s sentencing, prosecutors stated that Flynn spoke to McFarland before calling Kislyak “to discuss what to communicate to the Russian Ambassador about the sanctions.” McFarland was forced out of the White House shortly after Flynn resigned. Trump then tapped her as ambassador to Singapore, but her nomination was scuttled after she was revealed to have misled lawmakers about her knowledge of Flynn’s calls with Kislyak. McFarland, a frequent Fox News commentator, remains a Trump booster.

McFarland’s interview offers new evidence that the Trump team disregarded the Logan Act. McFarland told investigators she was familiar with the law “but had not thought deeply about it,” according to the interview summary. She also said that few people in the incoming administration were “familiar with the act” and that she “did not recall any discussions that what Flynn was doing was inappropriate,” the summary says. The Mueller report says that Flynn’s calls “raised potential Logan Act issues,” but Mueller did not charge anyone with violating that law, which has not been enforced since the 19th century.

McFarland’s reference to Nixon’s actions, however, suggests a problem that goes well beyond the Logan Act. Nixon’s efforts to scuttle a possible peace deal in Vietnam to boost his election chances shows the importance of the ideas underlying the law: Presidential candidates should not mess with foreign policy or seek foreign governments’ help for electoral gain. The Logan Act was just one component of America’s founders’ efforts to prevent foreign influence in US elections. In his farewell address, George Washington warned that partisanship “opens the door to foreign influence and corruption.”

McFarland was interviewed as part of Mueller’s investigation into Russian interference in the 2016 election. Mueller found that Trump’s presidential campaign in some cases welcomed Russian help and “expected it would benefit electorally from information stolen and released through Russian efforts.” Many Trump defenders have shrugged off that finding and also dismissed the import of Trump’s efforts to pressure Ukraine to announce investigations that would benefit him in the 2020 election. While McFarland’s statements about Flynn’s calls relate to contacts that came after Trump’s election victory, her remarks are part of that broader campaign by the president’s supporters to downplay the significance of his aides’ secret dealings with foreign powers. And it is jaw-dropping that McFarland cited Nixon’s act of betrayal to justify the Trump team’s conduct.

After Nixon’s election, allegations about his campaign’s interference in the peace talks quickly emerged, though Nixon’s direct involvement was not yet known. At the time, “everyone agreed it was a bad thing,” Farrell notes. Even Nixon said so. Though he always denied interfering in talks, he said in a 1977 interview, “I couldn’t have done that in conscience.”

Farrell said that for McFarland to cite Nixon’s actions to argue, in effect, that “everybody does this” shows “how radically our norms have been trashed.”

“If there was one thing that any American agreed on during the Cold War, it’s that our ballots are sacred,” Farrell said. “And the idea that you are going to have foreign powers interfering, or that a person would go overseas and recruit foreign interference, would be outrageous.”