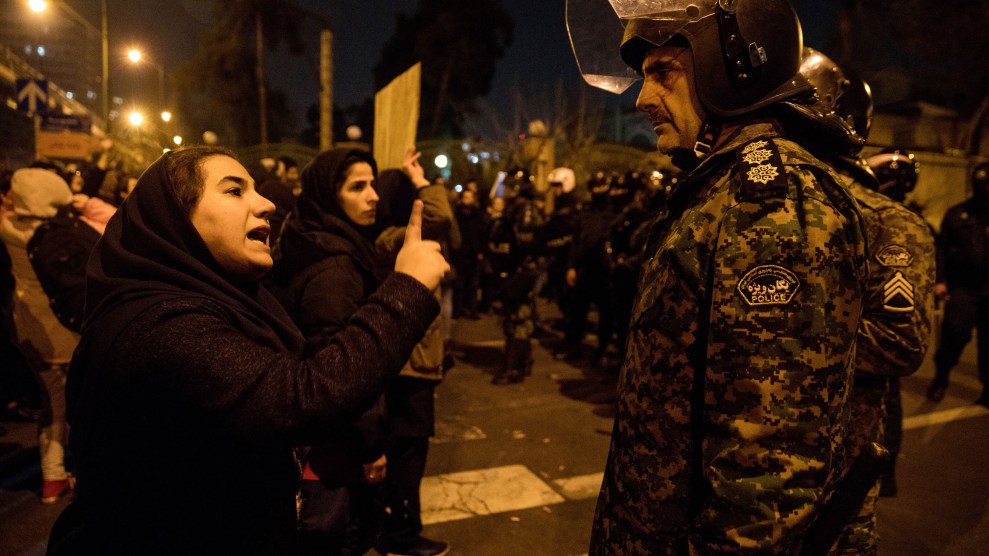 A woman attending a candlelight vigil for victims of Ukraine International Airlines Boeing 737 talks with a police officer at Amirkabir University in Tehran on Saturday.Mona Hoobehfekr/ISNA/AFP/Getty

Thousands of people took to the streets across Iran this weekend to condemn their government for shooting down a Ukrainian passenger plane—killing all 176 people on board—and then lying for days to hide its role in what happened.

The bluntness of these protesters, captured in videos below, is particularly striking following a brutal crackdown by the regime late last year on demonstrations that were initially sparked by an increase in gas prices. According to CNN, the UN Human Rights Office had information to show that some 200 people were killed and thousands were arrested during the crackdown.

#IranProtests
The public's anger has a clear target: Khamenei.
Crowds chant "Khaemnei is a murderer, his regime is obsolete."#IranPlaneCrash pic.twitter.com/WQpXeM65Zj

The Ukrainian plane was struck by surface-to-air missiles minutes after taking off from an airport near Tehran on Wednesday. It carried passengers from Iran, Canada, Ukraine, Sweden, Afghanistan, Germany, and United Kingdom, and was en route to Ukraine. Hours earlier Iran had launched an attack on US targets in Iraq, in response to the US killing of Iranian Maj. Gen. Qasem Soleimani earlier this month, and Iranian officials said they had been on alert for a potential counterattack.

Iranian officials admitted their role in the crash late Friday, after days of denials. Iranian President Hassan Rouhani described the incident as a “disastrous mistake,” and Khamenei called for an investigation. On Twitter, Iranian Foreign Minister Mohammad Javad Zarif offered his “profound regrets, apologies and condolences,” but also criticized the United States for ratcheting up tensions by killing Soleimani. “Human error at time of crisis caused by US adventurism led to disaster,” he wrote.

On Saturday, some of the Iranian demonstrators ripped up photos of Suleimani, according to reports from Iran’s semi-official Fars news agency. In a commentary, the news agency condemned Iran’s leaders for trying to cover up their role in the downing of the plane. “It is pivotal that those who were hiding the truth from the public for the past 72 hours be held accountable, we cannot let this go,” it read, according to the Times.

Hundreds of people continued demonstrating at universities in Tehran into the night Saturday. The UK ambassador to Iran, Robert Macaire, was detained briefly after leaving a protest at Amirkabir University of Technology following a candlelight vigil. He was detained for allegedly “inciting” demonstrators and released after a few hours; he denied participating in the protests and said he was at the university to honor the victims of the crash. Dominic Raab, the UK foreign secretary, said, “The arrest of our ambassador in Tehran without grounds or explanation is a flagrant violation of international law.”

On Sunday, riot police gathered at public squares and the University of Tehran, the Guardian reports.

International leaders have also condemned Iran for its role in the crash. Canadian Prime Minister Justin Trudeau said he was “outraged and furious” and called on Iran to “take full responsibility.” Ukrainian officials said they were investigating the case as a potential instance of “willful killing and aircraft destruction.”