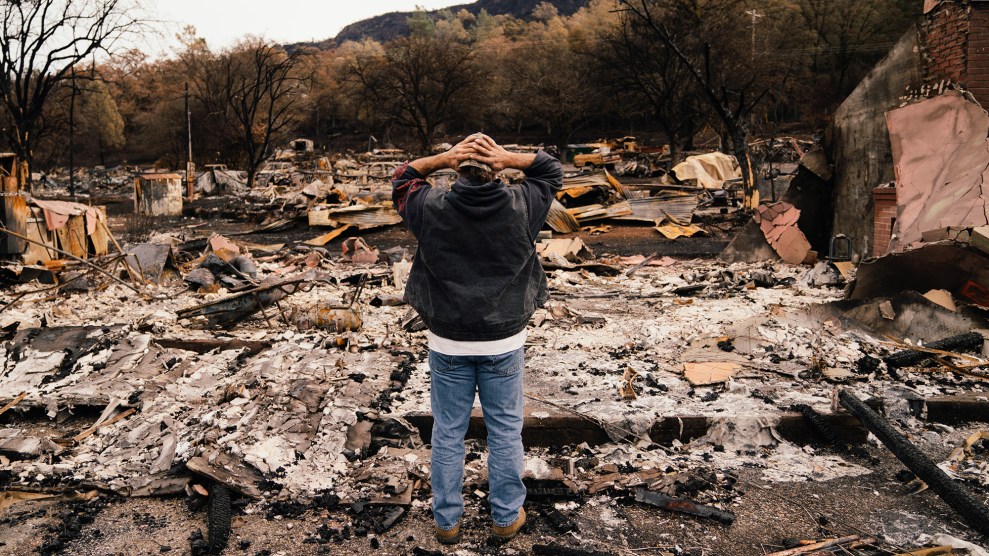 When disasters strike and overwhelm cities and states, the Federal Emergency Management Agency is supposed to step in and help emergency response and recovery efforts. Unfortunately, FEMA is best known for its failures—dangerously slow response times, public relations scams, languishing aid—and it seems now the agency has hit another new low. FEMA, which is also notorious for coming up short on pledged financial support, is now going as far as to say disaster victims may have to pay it back.

To be clear, the federal agency is actually asking PG&E—the utility company currently in the middle of bankruptcy proceedings that is responsible for wildfires over the past several years—for a nearly $4 billion reimbursement for the cost of the federal government’s response to California fires in 2015, 2016, and 2018. The agency argues that it has a duty to hold third parties who cause a disaster accountable for the spent taxpayer dollars. Still, a former FEMA director was reportedly shocked by the agency’s request calling it “unusual” and “inappropriate.”

Under the utility’s current bankruptcy plan, the money would have to come out of the $13.5 billion reserved primarily to compensate  thousands of wildfire victims. That would effectively eat up almost a third of the relief money. Barring that, FEMA threatened to go after individual fire victims.

So, in either scenario, victims get shorted, and FEMA doesn’t seem to mind.

According to the San Francisco Chronicle:

FEMA told The Chronicle that it is compelled to seek compensation from PG&E. Otherwise, individual victims would be on the hook if they get settlement money that duplicates funds already paid by the federal government, according to Bob Fenton, the agency’s regional administrator.

Fenton said FEMA has “no interest” in reducing the amount of settlement funds available for fire victims.

“What we are interested in doing is holding PG&E responsible and accountable for the billions of dollars taxpayers provided to assist individuals and communities affected by the wildfires,” he said. “The last thing I want to do is have to go after these individuals that have received claims from the bankruptcy where certain parts of that claim may duplicate funding that we’ve already given them. … It’s much easier up front to go ahead and simply deal with PG&E directly.”

FEMA has asserted about $3.9 billion in bankruptcy claims against PG&E because of the 2015 Butte Fire, the 2017 wildfires in Wine Country and the 2018 Camp Fire. Court papers show that only about $282 million of the total relates to individual assistance FEMA gave to victims of the disasters — the rest is for aid provided to other government agencies and administrative costs.

The agency filed an initial claim against PG&E in October, at a point when the bankruptcy proceedings had been long underway and the utility and fire victims were already well into settlement negotiations. (A judge approved the agreement with victims in December.)

This claim by FEMA in federal bankruptcy court puts at risk the possibility that the thousands of families still struggling to rebuild their lives will not receive the restitution they deserve…We are told by victims that they were reassured by FEMA that they would not face additional costs when accepting federal offers of debris removal. Not only does this reversal by FEMA betray these promises, it will serve to undermine any future effort to coordinate rebuilding and debris removal in response to future natural disasters as FEMA’s reputation as an honest and fair partner will be diminished.

“I think it’s just disgusting that FEMA is doing this. These victims have had their lives turned upside down,” California state Sen. Scott Wiener told Mother Jones Monday. Wiener has been a vocal PG&E critic and has said he plans to introduce legislation to take the utility under state ownership. “The idea that we’re going to try to nickel and dime these survivors by saying the FEMA money might be a little bit duplicative? Come on, it’s just absurd. This emergency support is there to help people in crisis. The last thing that FEMA should be doing is trying to go after these victims for reimbursement or try to debilitate the PG&E settlement funds so that victims aren’t being made whole. I really hope that FEMA backs off.”

PG&E’s bankruptcy proceedings are nearing the year mark. While there has been significant progress in the past couple months, the utility faces several more hurdles, including claims from FEMA and others, before it can emerge from bankruptcy, which it needs to do with the governor’s approval by June. Judge Dennis Montali will likely address FEMA’s claim at a hearing in February.