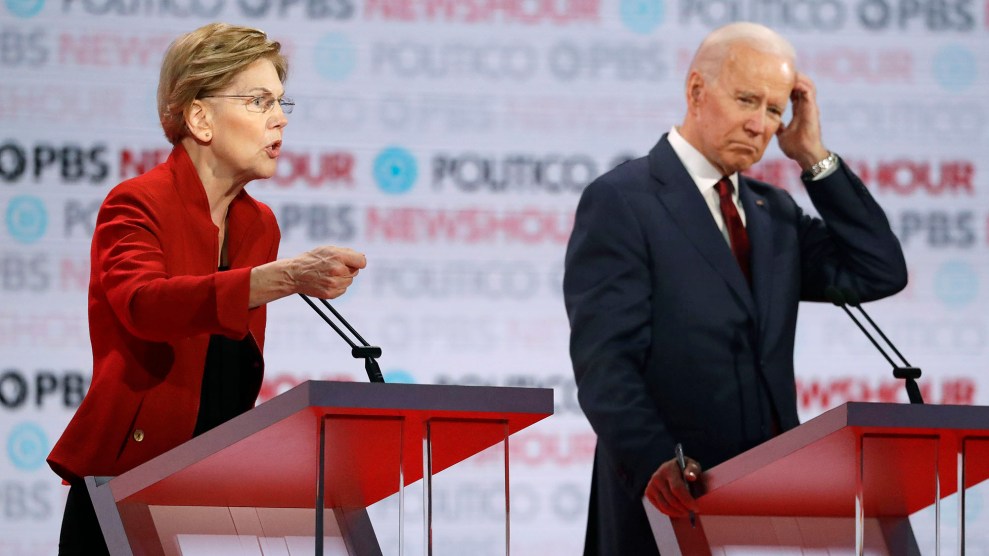 On Tuesday, Elizabeth Warren released a plan for, in her campaign’s words, “fixing our bankruptcy system to give people a second chance.” Warren, who taught bankruptcy law at Harvard and spent years as a consumer advocate on the matter, is returning to the issue that drew her into politics. But less than one month away from the Iowa caucus, the subtext of the plan couldn’t be clearer—it’s also a reminder of who she started her political career fighting against. He just happens to be the frontrunner for the Democratic presidential nomination.

Warren’s proposal calls for rolling back key elements of the 2005 bankruptcy reform law, which she testified against in the Senate and argued against in the press and in countless interviews at the time. “I was lucky to pick up some terrific allies in the Senate,” she writes in the plan’s introduction, identifying four by name—Ted Kennedy (D-Mass.), Paul Wellstone (D-Minn.), Russ Feingold (D-Wis.), and current Senate Minority Whip Dick Durbin (D-Ill.) Biden’s work on the other side isn’t mentioned, but as she’s explained in the past, and as I wrote in a cover for the magazine last year, the bankruptcy reform law Warren pilloried was one of his signature achievements as a Delaware senator.

The bill, which Biden worked on for nearly a decade, brought his state’s parochial economic interests into direct confrontation with his brand as a warrior for the middle class. The credit card companies that called Wilmington home were some of the biggest drivers behind the legislation, and Biden was a loyal home-state senator. The result was a piece of legislation that, while it included some consumer protections, generally made it more difficult and more expensive for individuals to escape their debts and easier for creditors to collect. Biden fought hard for the bill. When it came time to vote, he joined Republicans in knocking down Democratic amendments that aimed to improve it. Warren hasn’t forgotten. Her plan states:

In 2005, Congress rejected an amendment to the bankruptcy bill that would have allowed parents to spend a reasonable amount of money on toys and books and basic recreation activities for their kids during the bankruptcy process. That’s just wrong—and my plan will provide those protections.

She doesn’t say that Biden voted against that amendment. But she helpfully provides a link to the roll call. Ditto for an amendment “that would have allowed union members to continue paying their union dues during the bankruptcy process.” Another portion is less subtle, taking aim at Delaware itself, which built an economic model around, in part, being a place where rich people can hide their assets:

We haven’t heard a ton about the bankruptcy fight during this campaign, because the Bankruptcy Abuse Prevention and Consumer Protection Act of 2005 isn’t the kind of legislation most voters know by heart. But beyond the specifics, Warren’s campaign is telling a story about power. Senators with power (cough cough cough) carried water for big banks and made it harder for working families to get by. Maybe that story won’t push her over the top—but it has gotten her this far.