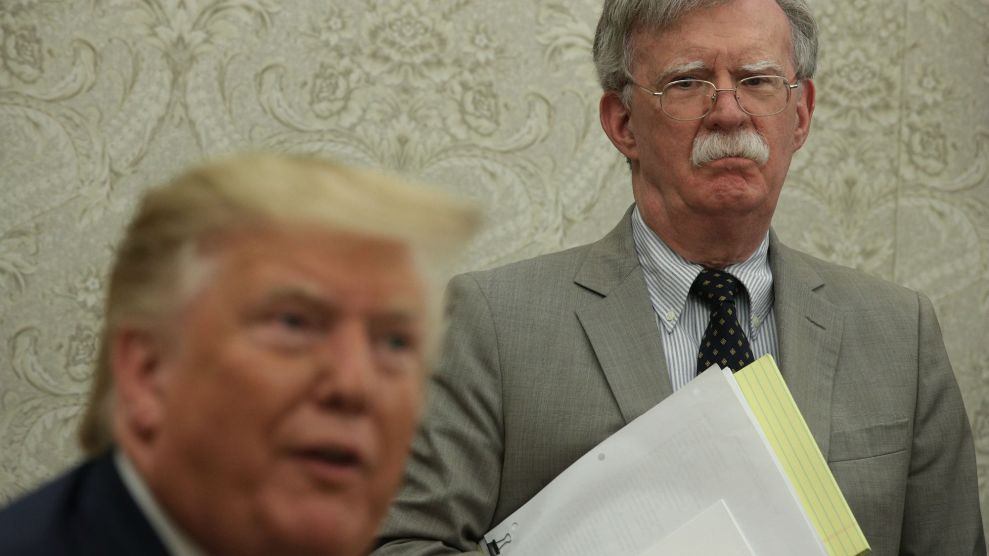 President Donald Trump, GOP lawmakers, and White House lawyers presenting their case for Trump’s acquittal in the Senate spent Monday publicly workshopping a series of arguments for why the president’s ongoing impeachment trial should not include testimony from former national security adviser John Bolton—testimony which seems likely to contradict a key tenet of Trump’s case.

To back up a bit: On Saturday, Trump’s lawyers formally launched his defense, emphasizing that “not a single witness” could prove that Trump personally connected nearly $400 million in security aid to Ukraine with his demand that the country launch investigations that could help him politically. The next day, the New York Times reported that in his forthcoming book, Bolton asserts that Trump told him in an August 2019 meeting that he wanted to keep withholding the money until Ukrainian officials launched investigations into former Vice President Joe Biden and his son Hunter, as well as alleged Ukrainian support for Hillary Clinton in 2016.

On Monday, some Republican senators, including Utah’s Mitt Romney, and Maine’s Susan Collins, suggested they would vote in favor of calling for Bolton’s testimony. All the while, Trump and other congressional Republicans are tying themselves into knots to argue the Senate should ignore Bolton and continue the trial without any witnesses—never mind that many of their arguments actually make a persuasive case for why Bolton should, in fact, testify.

Here are some notable examples:

I NEVER told John Bolton that the aid to Ukraine was tied to investigations into Democrats, including the Bidens. In fact, he never complained about this at the time of his very public termination. If John Bolton said this, it was only to sell a book. With that being said, the…

You’d think that, since Bolton says one thing and Trump says another, senators would want to secure sworn testimony from the former security adviser. Presumably, Bolton would not lie under oath and expose himself to a perjury charge and Trump would be vindicated, right? Trump himself could even provide sworn testimony if he chose to. (He won’t.)

The significance of Bolton’s account is that it contradicts Trump’s claims, and therefore undermines his defense. As they seek to further justify their arguments against witnesses, GOP lawmakers seem seem to be reversing the normal logic of a trial, suggesting that a witnesses should not be asked testify because his credibility is damaged by the defendant who is disputing his claims.

“The President has already acknowledged that what Bolton is contending…is not the case,” Sen. Mike Braun (R-Ind.) said a press conference. Rep. Mark Meadows (R-NC) told reporters that there “are no witnesses who can provide anymore clarity…than the President of United States.” Meadows also cited public claims by Vice President Mike Pence and Ukrainian officials denying a quid pro quo. Rep. Elise Stefanik (R-NY), one of Trump’s most ardent supporters and a member of the House Intelligence Committee, told reporters that President Trump “has said that he did not tie” the release of aid to investigations.

Other Trump defenders questioned Bolton’s credibility on other grounds. “Is he a firsthand witness?” asked Rep. Josh Hawley (R-Mo.) “I’m not sure.” Sen. John Kennedy (R-La.), in an apparent reference to Bolton’s acrimonious exit from the White House, told reporters that Bolton’s claims would be “more believable if they were coming from someone else.”

While these GOP attacks may make sense as part of a public relations campaign, they are distinctly bad arguments for asserting that Bolton should not be subpoenaed to give sworn testimony.

Bolton’s testimony would be mean to Trump

After 2 weeks, it’s clear that Democrats have no case for impeachment. Sadly, my colleague @SenatorRomney wants to appease the left by calling witnesses who will slander the @realDonaldTrump during their 15 minutes of fame. The circus is over. It’s time to move on! #gapol

The newest member of the world’s greatest deliberative body, Sen.Kelly Loeffler (R-Ga.), who was appointed to a seat opened by the mid-term retirement of former GOP Sen. Johnny Isakson, went even further on Monday. Loeffler in a tweet attacked Romney for suggesting he and others will vote for Bolton’s testimony, arguing that Bolton will “slander” Trump. The argument suggests that Loeffler favors an impeachment trial that excludes negative testimony about the president—which, given the circumstances, seems unlikely.

"Unless there's a witness who's going to change the outcome, I can't imagine why we'd want to stretch this out for weeks and months. And if we call any witnesses who are subject to privilege, it would take weeks and months.''

Sen. Roy Blunt (R-Mo.) in remarks Monday suggested Bolton’s testimony would simply be a waste of time since it’s not going to change the outcome of the trial. Because Trump could assert executive privilege over Bolton’s testimony, Blunt reasoned, the dispute might take “week and months” to resolve.

Blunt is using a questionable interpretation of executive privilege. There is little legal precedent for a president using executive privilege to block a private citizen from testifying. Given Bolton’s willingness to appear, the Senate could likely secure his testimony within days. But Blunt’s statement is telling; it would be difficult to imagine a witness in the impeachment trial with testimony that would be more relevant than Bolton’s. Blunt’s argument is perfectly circular: No witness could stop Republicans from acquitting Trump, and since acquittal is assured, there is no need for any witnesses.

Several Republicans argued on Monday that House Democrats could have secured Bolton’s testimony, and since they did not, the Senate should ignore him. These claims completely miss an October 30 request the House made asking Bolton to agree to a voluntary interview, though Democrats did not subpoena him.

And during his arguments before the Senate today, Jay Sekulow, one of Trump’s attorneys, took this posture a step further by simply repeating a claim Trump’s lawyers made on Saturday. Referring to the House’s impeachment inquiry, Sekulow said: “Not a single witness testified that the president himself said that there was any connection between any investigations and security assistance.”

Bolton, of course, would be expected to testify that Trump linked investigations by Ukraine to US security assistance. The president’s lawyer nevertheless repeated his argument as if senators, heads in the sand, will refuse to consider Bolton’s account. That actually may be the one perspective on all this that will turn out to be true.