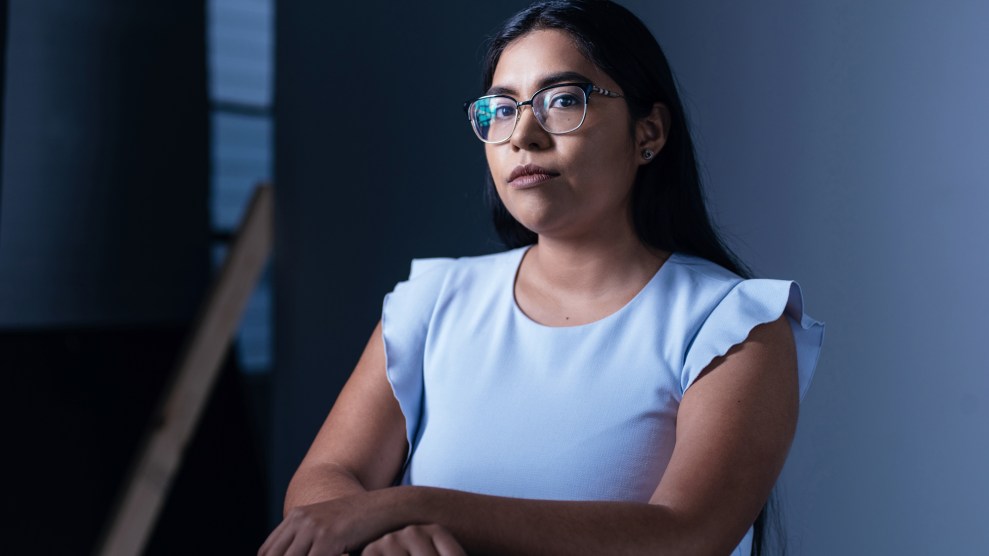 Jessica Cisneros needed to find a dentist. When she decided to challenge Texas Rep. Henry Cuellar in the upcoming Democratic primary, Cisneros quit her job and moved back in with her parents in Laredo to save money. She’d bought her own insurance plan after turning 26 last May, but it didn’t include dental, and she still had six figures in law school debt. So when Cisneros needed a root canal in July, she went with the cheapest option: Mexico.

Affordable and accessible health care is hard to come by on the border. A third of the county she lives in is uninsured. Diabetics go to Nuevo Laredo for insulin. Women go there for birth control. Cisneros met a woman who saved up for a mammogram, only to be hit with another expense out of nowhere. “She had to choose between getting the study that she needed done and fixing her AC,” Cisneros told me when we met in August. “Sometimes people just decide to go to el otro lado, right?”

As she introduces herself to the district, Cisneros mixes in stories like that with her own to make the case for sweeping structural changes: She wants to blow up the private health insurance market, demilitarize the border, and shut down private immigration prisons.

A year and a half after Rep. Alex­an­dria Ocasio-Cortez (D-N.Y.) stunned the political world with an upset victory over the chair of the House Democratic Caucus, Joseph Crowley, Cisneros is hoping to accomplish something similar. A Vogue headline distilled the buzz surrounding her to a question: “Is Jessica Cisneros the Next Alexandria Ocasio-Cortez?” Cisneros had a ready response to such comparisons: “I admire her a lot,” she told me. “But right now I’m just focused on South Texas and trying to be the leader South Texas needs, and trying to be the next Jessica Cisneros.”

And Laredo is a long way from the Bronx. Cisneros and the eight-term incumbent she’s running against have radically divergent ideas about the electorate and what kind of ideas will play in a large rural border district. Cuellar, in whose DC office Cisneros once interned, has a lifetime A rating from the National Rifle Association, opposes abortion rights, and has voted with President Donald Trump more often than any other Democrat in Congress. You might expect a record like that—in a district similar to this one—to doom the incumbent. Cuellar is running on it.

There’s a lot riding on how well Cisneros does. If the kinds of policies she’s pushing, like the Green New Deal and Medicare for All, are going to take hold in the Democratic Party, they’re going to have to catch on in places like South Texas. Either you figure out how to sell universal health care to people crossing the border for a mammogram, or your movement withers on the vine. Cisneros’ success or failure will rest heavily on a question that a lot of Democrats are asking: Just how much of a revolution do people want?

So far, Cisneros has reason for encouragement. When we met, she had just gotten off the phone with emily’s List, which supports pro-choice Democratic women and would eventually endorse her in October. In September, she picked up her first congressional endorsement, from Sen. Elizabeth Warren (Mass.), and introduced the presidential candidate in front of 5,000 people at a rally in Austin. Not long after that, Ocasio-Cortez herself offered a stamp of approval, telling HuffPost, “I want to be the shortest-lived ‘youngest congresswoman ever.’”

We met at Cisneros’ temporary campaign office in a neighborhood of single-family homes on the east side of Laredo. The house had belonged to the grandparents of a staffer and still bore trappings of its past life: Old, faded family photos lined the walls and nice china filled a cupboard. Cisneros walked in wearing a purple campaign T-shirt with her name on it. Her necklace said “Justicia.”

Cisneros was born in Laredo, the daughter of Mexican immigrants who received legal status as part of President Ronald Reagan’s 1986 overhaul of the nation’s immigration system. She gravitated toward immigration law, she told me, because the families she saw crossing the Rio Grande reminded her of her own. Cisneros was skeptical when Justice Democrats, the group that had recruited Ocasio-Cortez, reached out to her about taking on Cuellar. “I think that’s kind of a product of imposter syndrome that women of color have,” she reflected. But she jumped into the race last June. She raised $100,000 within 48 hours of her announcement and picked up more small-dollar donations than Cuellar did in his last campaign.

In her launch video, Cisneros took aim at Cuellar, calling him “Trump’s favorite Democrat,” touting his opposition to sanctuary cities and Planned Parenthood funding, and painting him as a tool of the “big corporations” who fill his campaign coffers. (More than half of Cuellar’s fundraising this cycle has come from PACs.) Cuellar’s proudly conservative voting record makes him such a natural target for a progressive challenge and national grassroots energy. But Cisneros is not just running against Cuellar. She is also running against the regional economy as it currently exists.

The past two decades have seen a boom in federal law enforcement jobs in South Texas and a growing infrastructure of detention facilities to house immigrants caught in the ever-­expanding dragnet. The Laredo area alone houses three ICE detention centers, including the Rio Grande Deten­tion Center, run by the GEO Group, the nation’s largest private prison company. The number of Border Patrol agents in the Laredo sector has nearly doubled since 2002. Cuellar has received hundreds of thousands of dollars from GEO, and he boasts of the border security pork he’s brought to his district. Cisneros said Cuellar has created a “dependence” on border security jobs at the expense of other kinds of investment—in health care, education, housing, and new industries. And it’s a corrosive kind of monoculture, creating jobs for some Laredo­ans by depriving others of their freedom. She recently heard from a woman whose daughter had been put in deportation proceedings after being pulled over with a busted taillight. “Instead of her working, being with her kids who really need her, private prisons like GEO Group are making thousands of dollars off her while she’s being detained there,” she said. Who was this economy really for?

The alternative is still a work in progress. When I asked Cisneros what other lines of work a Border Patrol agent might pursue in her economy, she said, “That’s something that we’ve been trying to talk about in terms of strategy,” but “if people like the fieldwork and being out there, I think it would probably involve something along the lines of environmental regulation of the river”—part of a Green New Deal, the centerpiece of her economic agenda. Ditto for South Texans employed in the oil and gas industry. Cisneros talks eagerly about the wind turbines she sees when she drives through the Rio Grande Valley and about a program that would give residents of public housing jobs retrofitting the buildings they live in to be more energy-efficient.

A few hours after our interview, Cisneros and her campaign manager, Danny Diaz, a former public school administrator, dropped by a house down the street from their campaign HQ for a listening session with a half-dozen supporters. The attendees were young, and over chips and soda, they unloaded on the problems they faced in the district, and their dreams of what it could be. Cisneros took notes.

They talked about the strain that truck driving puts on families, the symbolism of making Laredo—the nation’s largest inland port—“green,” and how their families struggled to make ends meet. Cisneros and a college student recalled getting dragged along to warehouses to help their parents put labels on consumer goods to earn extra money. They vented about going to Mexico for health care. Above all, they were tired of how debates in Washington complicated their lives—Border Patrol showing up unannounced at the front door, checkpoints, cops asking where you’re really from. Cisneros told them that when she has a light-skinned client, she sometimes gets asked if she’s the one in removal proceedings. “Even though I’m dressed in like a full suit with a whole case file under me,” she said. “It doesn’t matter, because I’m the brown one and they’re not.”

These are the sparks of revolution she’s banking on—a long-ignored progressive base that is tired not just of Cuellar individually, but of the status quo he represents. So far, there are signs of that revolution in small groups and in grassroots money pouring in from outside the district, but it’s still early.

The 64-year-old Cuellar speaks for a much different community—not the Laredo of millennial frustration, but the Laredo of people who found work and stuck around. Like his opponent, he was a child of migrant farmworkers who worked his way through law school and ran for office at a young age. In 2004, he beat a Democratic incumbent by 58 votes and has barely been challenged since. The Cuellars virtually run the city—his brother is the county sheriff; his sister is a judge. Although he’s recently sharpened his attacks on Trump, Cuellar seems comfortable doing what he’s always done. “[He’s] definitely not in a situation like Crowley, where we’re gonna get weak in the knees and pierce our nose and adopt a socialist platform,” his spokesperson, Colin Strother, told me.

In the eyes of Cuellar’s campaign, the entire premise of Cisneros’ candidacy represents a fundamental misreading of the region, its voters, and its economy. “They’re welcome to come in here and tell 17,000 oil and gas field workers that they’re no longer gonna have jobs under the Green New Deal,” Strother said. Ditto for the “3,700 ICE families” and the “high-end hunting ranches” that dot the vast stretches of South Texas. A vote for Cisneros, he argued, would be a vote to gut the regional tax base, and the religious, conservative, gun-owning residents won’t stand for it. “Jessica Cisneros knows nothing,” he added.

When I mentioned this conversation to Cisneros, she laughed. “He’s running a campaign of fear, telling people, ‘If you vote for Jessica Cisneros, she’s gonna kill these jobs,’” she said, referring to Cuellar. “That’s not true. We have a jobs program that we’re gonna be advocating for and we’re gonna end up so much better if we make this transition. The only job that I’m trying to kill is his.”

An earlier version of this article, also distributed to print subscribers, misidentified the role of Rep. Cuellar’s spokesperson, Colin Strother.