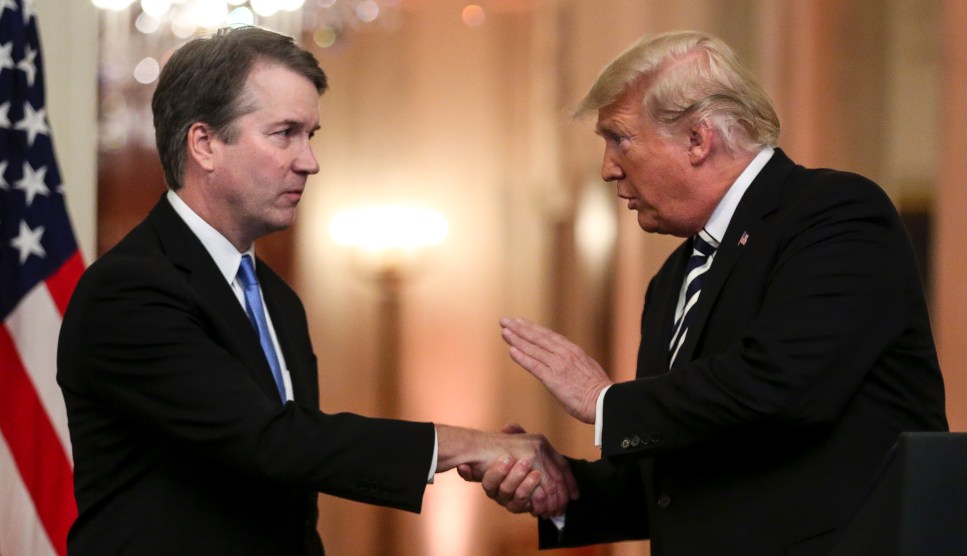 President Donald Trump paws Brett Kavanaugh at the swearing-in of the US Supreme Court justice.Oliver Contreras/Sipa/AP

Donald Trump, still the president, has been credibly accused of extortion. He has also been credibly accused of rape. He was impeached for one of these. Just let that fact detonate again in the narrative of who this escape artist is, and who the congressional cowards are who waited for an extortion attempt rather than a rape report to inquire about impeachment. Why weren’t multiple allegations of sexual assault worth an inquiry? This question has been asked endlessly, and answered rarely, never more brilliantly than by the Atlantic’s Megan Garber in a recent essay naming as the culprit a “culture that insists, still, that boys will be boys, and that, as a corollary, Trump will be Trump, and that it is useless to question the inevitable.”

“Boys will be boys,” that tiresome trope so widely assumed to be axiomatic that it’s earned an entry in Merriam-Webster’s dictionary as “not surprising or unusual when men or boys behave in energetic, rough, or improper ways.” Bad male behavior is inevitable, the idiom insists, as if it were explanatory, the permission slip many men use to grab with impunity, grope with entitlement, or boast about brawling (in bars, at work, online). It’s in the water; a fact of nature, the saying supposes.

It’s been supposing this for a long time. “Boys will be boys” first appeared in recorded English in the 1500s, a stubborn successor to a Latin expression translated as “[boys] are [boys] and do childish things.” Five-hundred years later, this crap is codified as implicit truth, humming at the ambient level of culture, and crossing languages: In French, it’s “ça, c’est bien les hommes” (“that’s men for you”). In Portuguese, “como um rapaz” (“just like a boy”). In Spanish, “así son los hombres” (“the way men are”). In Russian the idea is so pervasive there are two variants: “malchishki yest malchishki, мальчишки есть мальчишки” (“boys are boys”) and “parni yest parni, парни есть парни” (“guys are guys,” or “dudes are dudes”). There’s a related Chinese saying, “gou gaibuliao chi shi, 狗改不了吃屎” (“you can’t stop a dog from eating shit,” or “bad habits are hard to change,” often used to mean boys will act like boys). Icelandic has a recent addition to its language: “strakar verða strakar” (“boys will be boys”). Squinting back at Latin, the tautology is right there too: “sunt pueri pueri, pueri puerilia tractant” (“boys are boys, and boys will act like boys”).

“The phrase ‘boys will be boys’ makes two false and harmful assumptions,” says Cleo Stiller, the Peabody-nominated reporter whose new book, Modern Manhood: Conversations About the Complicated World of Being a Good Man Today, is a candid collection of interviews with men about what manhood can mean in the #MeToo era. “One assumption is that boys all act the same and are ‘hardwired’ to do so. We know from research that this is not true. The second is that because the behavior in question is so prevalent, it’s not harmful and there’s nothing to be done about it. It’s a double whammy used to effectively absolve us as a society and individuals of doing better.”

Stiller’s exploration of men’s questions, confessions, and insight is one of several similar projects in recent months. In his new book Are Men Animals?, Brown University anthropologist Matthew Gutmann debunks the myth that biological determinism drives and explains human male violence. He calls for a clearer separating of “maleness from manliness,” the former biological, the latter sociocultural, and his project is as urgent as Trump’s removal from office: “Expand the definition of what masculine can include.”

But if “boys will be boys” is so flawed and menacing a claim, why is it still spouted by women and men? It’s peddled as fact by the first lady (“I would just say, men will be men,” Melania Trump allowed in shrugging acceptance of Chris Matthews’ hot-mic drooling on live TV). It’s the sort of rhetoric rallied around by pseudo-intellectual Jordan Peterson and his morally panicked choir of aggrieved men, who seem to believe that men stand to be diminished by women’s rights. And it’s reinforced by albums and artists and songs titled “Boys Will Be Boys,” at least 129 of which adorn AllMusic.com’s archives.

The reason this idiom survives is that it’s self-shielded: It’s constructed as a tautology. Expressions like it don’t decay because they can’t. No tautology can; it’s immune to erosion. X equals X. It is what it is. This is how a tautology reinforces an ideology: Set up a definitional meme, and your work is done. To debunk “boys will be boys” will take more than dropping the idiom. It will take reporting and ridicule, humor and scholarship, offline chats and online conversations; not sweeping statements about men categorically in the same absolutist, intrinsic strokes that gave us “boys will be boys” in the first place, but indictments of the culture and mindsets that support it.

“I don’t give credence to the phrase ‘boys will be boys’ because that’s an excuse to give men—particularly white men—carte blanche to do whatever the fuck they want. And we already have words for that shit,” Genetta Adams, The Root’s managing editor, who guides the site’s cultural and political coverage, tells me.

More writers and readers are speaking out to multiply masculinity’s possibilities. “Boys will be boys so long as this is the expectation we set for them. Boys will be better when we give them more choices,” tweeted Liz Plank, author of For the Love of Men, in response to new sexual misconduct allegations against Supreme Court Justice Brett Kavanaugh.

And men themselves have everything to gain by debunking myths of masculinity. Some of the men Stiller interviewed are cataloguing their own behavior to look for patterns of productive and destructive actions, examining tendencies they’d “never thought about and prefer to never think about,” Stiller writes.

Another reason “boys will be boys” persists is that attacking it is heard as an attack on boys themselves. But the opposite is true: To dismantle “boys will be boys” is to release boys from its grips, to defend men and women from its presumptions. A replacement meme, if we need one: Assholes will be assholes (which isn’t limited to men).

“Trump was elected not despite his repeated remarks championing sexual assaults on women, but because of them,” Gutmann writes. “He was chosen to lead because tens of millions of people in the United States believed that boys will be boys and that those who disagree should get with the program.”