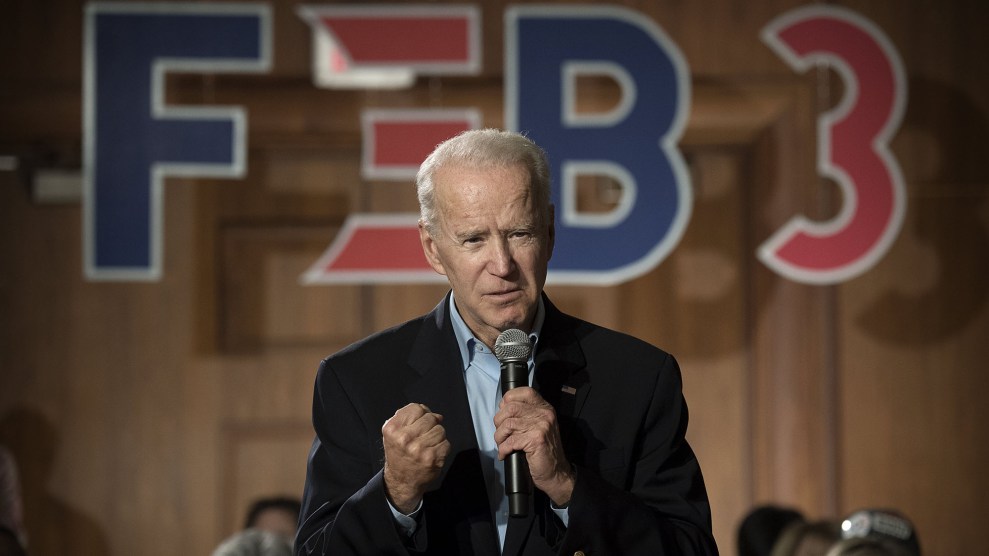 Joe Biden campaigns in Iowa ahead of Monday's caucuses.Jerker Ivarsson/ZUMA

If Joe Biden does come back in the polls to win the Iowa caucuses next week, he should send an edible arrangement or something to Joni Ernst. Maybe you saw this. On Monday, at the end of another long day in the Senate impeachment trial, the Republican senator from Iowa brought the subject back to the man who, in many ways, the entire Ukraine scandal was really about.

“Iowa caucuses are this next Monday evening,” she told a group of reporters, breaking into a huge grin. “I’m really interested to see how this discussion today informs and influences the Iowa caucus voters, those Democratic caucus-goers. Will they be supporting Vice President Biden at this point?”

The Biden campaign was so pleased with the comment they made a video about it. Ernst, as Biden put on Wednesday, was “screaming the quiet part into the bullhorn.” Republicans’ handling of the impeachment investigation and trial—their frequent insinuations of corrupt behavior and suggestions that he and his son should testify—and the “corruption” scandal that precipitated it, were about sabotaging Joe Biden, he said. And with just a few days left before a contest on which he’s placing an increasing amount of importance, Biden wants everyone in Iowa to know.

After months of treading delicately around the issue, the former vice president weighed in very deliberately in a series of stops in the western part of the state this week, spending more time talking about the impeachment trial (and his role in it) than about any of the policy fights that have dominated the campaign until now. Biden’s ads talk about how well he performs against Trump in head-to-head polls, but the impeachment drama illustrates his point far better than they any Quinnipiac survey.

He got to impeachment about midway through his remarks at each stop, after (as is his wont) an extended riff on “character.” And then he turned to Ernst.

“By the way, did anyone see what Joni Ernst said the other day?”

The crowd began to boo.

“Whoooooa!” he said, dropping his voice for comic effect. “Joni, Joni, Joni! She spilled the beans! You know, she’s just come out and said it! The whole impeachment trial for Trump is just about a political hit job to smear me, from the standpoint of Joni and all of her friends. It’s how scared Trump is of running against me.”

“The whole impeachment trial for Trump is just about a political hit job to smear me.”

Biden looked down at his notes and began to annotate Ernst’s comments for the benefit of the audience. “Now look, here’s what she said: ‘The Iowa caucuses are next Monday, I’m really interested to see how this discussion’—meaning the discussion about me on the floor of the Senate with Republican defense attorneys for the president—’how this discussion today’—two days ago—’this discussion today informs and influences Iowa caucus-goers. Will they be supporting Vice President Biden at this point?”

Someone in the crowd shouted back. “Yes!”

“I tell ya what!,” he said. “That’s just flat-out acknowledging, we’ve been doing everything we can do to keep Biden from becoming the nominee. And guess what? We tried it in Iraq and it’s not working—excuse me, in Iran—we tried it in Ukraine, almost got us into a war in Iran, and people got hurt in Iraq. Folks, I mean this is like something out of Alice in Wonderland!”

But folks, Biden was not done. Next he took aim at Florida Republican Sen. Rick Scott, who recently starting running ads in Iowa essentially making the same argument about Biden that led to Trump’s impeachment—alleging (with no apparent evidence) that Biden had strong-armed Ukraine to protect his son.

“Well, God love him, as my mother said,” Biden continued. “He’s so interested, a senator from Florida, as to whether or not I should win an Iowa caucus! Isn’t that fascinating? I guess if I had that much money, I’d spend it on anything I could. I don’t know! But, pretty amazing. All that seems to me is, think about it—from Florida, sitting in Washington, decides to start running negative ads, just a couple days before the Iowa caucus. Now, what do ya think on that?”

Biden events can be staid affairs. He has a tendency—and really, this shouldn’t be news to anyone—to ramble in a soft sort of monotone about minutiae that seems to lull the audience and maybe even him to sleep. But he is never more lively than when he is riffing about people he considers idiots. And in that sense, impeachment has given him the perfect punching bag, one that just so happens to be, in his view, validation of his entire theory of the race: Republicans fear Joe Biden. Don’t believe him? Just turn on the television.

Attendees I spoke to at Biden events were following impeachment closely, on TV or the radio or (in one case) in their dorm room via an Amazon Echo Dot, and angry with the way the process had unfolded. (Though a few thought Biden should have offered to testify.)

Wayne Head, whom I met before Biden’s speech in Council Bluffs, was so angry about something Sen. Ted Cruz (R-Texas) had said at the trial that he could remember the exact timestamp.

“At 10 minutes after 4 this afternoon, Ted Cruz sent one of those notes to the chief justice,” he told me. Cruz wanted to know two things, as Head recalled: Did Biden work with the whistleblower when he went to Ukraine in 2015? And did the whistleblower ever work with Hunter Biden?

“It was a loaded question,” Head complained. “It was meant to be hurtful. It was meant to throw out negative aspersions against Joe Biden on national television in the well of the Senate. It was despicable!”

Biden puts an upbeat spin on it, but it’s worth remembering that this is not how it’s supposed to work. George W. Bush did some ugly things to win reelection in 2004, but he did not attempt to get Ukraine to open up an investigation into John and Alexandra Kerry. (The fact that I had to Google who John Kerry’s children are sort of speaks to this.) Barack Obama didn’t wield the State Department against the Republican field in 2012. The closest parallel might be the Republican Congress’ endless dragging of Hillary Clinton over Benghazi, but Benghazi really did happen, and the disinformation and foreign interference that made 2016 infamous got going much later. This is the first caucus operating fully under the cloud of Trumpism, in which a sitting president can use his office to manipulate the political landscape however he sees fit. Trump has already poisoned the well.

Trying to game these things out from a caucus perspective can get your mind all twisted up. Maybe this really does mean Republicans fear Biden most. Maybe they want to suggest they fear Biden because the backlash will give him a boost and protect them from Sanders, the man they truly fear. Maybe Trump just didn’t think that hard about any of this before he went and committed crimes, because he has the attention span of a squirrel and no clear sense of boundaries. But whatever the case, Biden is 2020’s first target of election interference and maybe not the last. At least, he hopes, it just might help him win Iowa.