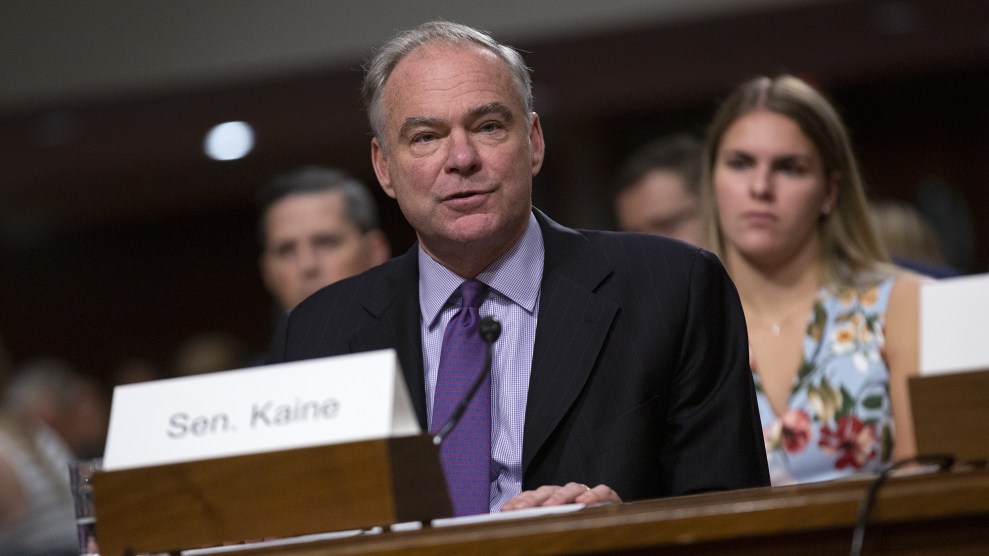 Sen. Tim Kaine (D-Va.) speaks at the confirmation hearing of Mark T. Esper to be the Secretary of Defense on July 16, 2019. Stefani Reynolds/CNP via ZUMA

Senator Tim Kaine (D-Va.) introduced a resolution on Friday to prevent a war with Iran in the aftermath of President Donald Trump’s decision to kill the nation’s top military leader, Gen. Qassem Soleimani—which threw a match into the combustible relationship between the United States and Iran.

I just filed a resolution to prevent Trump from starting a war with Iran. The President wants to pretend that Congress doesn't exist, but it's our clear Constitutional duty to debate and vote before allowing him to rush into an unnecessary war.

“The president does not have the authority for a war with Iran,” Senate Minority Leader Chuck Schumer said on the Senate floor Friday. “If he plans a large increase in troops and potential hostility over a longer time, the administration will require congressional approval and the approval of the American people.”

Sen. Rand Paul (R-Ky.) tweeted that a new war should be approved by Congress.

If we are to go to war w/ Iran the Constitution dictates that we declare war. A war without a Congressional declaration is a recipe for feckless intermittent eruptions of violence w/ no clear mission for our soldiers. Our young men and women in the armed services deserve better.

“We took action last night to stop a war,” Trump told reporters at Mar-a-Lago Friday. “We did not take action to start a war.”

But the president has escalated tensions with Iran, starting with his decision to leave the Iran nuclear deal. And experts have warned that war is a possibility. “Any spark in the region could set off this fire,” Joe Cirincione, a nuclear weapons policy expert and former adviser to the State Department, told Mother Jones this summer.

President Donald Trump’s rushed decision to execute Soleimani appears to have been made with little preparation for the fallout from the decision—the threat of war and destabilization in the Middle East that kept the last two presidents from killing the dangerous military leader. Top officials at the Department of Homeland Security gathered on Thursday and Friday to game out how Iran might follow through on its promise of “forceful revenge,” including the possibility of cyber attacks. The US urged all American citizens in Iraq, where Soleimani was killed along with Abu Mahdi al-Muhandis, an Iraqi militia commander and government official, to leave the country. The Pentagon will deploy an additional 3,000 troops to the Middle East to help secure the region.

Saturday brought reports of a second airstrike in Iraq which allegedly blew up two military vehicles and may have killed five people, though the United States says it is not responsible.

It may be up to Congress to put the breaks on an escalating exchange of blows that threatens to become a new war in the Middle East. Kaine’s war-powers resolution would force the Senate to debate and vote on whether to stop the increase in hostilities until the administration receives approval from Congress. But even if the Senate and House passed the resolution, Trump could still veto it.

“Our country has, quite self-consciously, given one person, the President, an enormous sprawling military and enormous discretion to use it in ways that can easily lead to a massive war,” Jack Goldsmith, a former Justice Department lawyer under President George W. Bush, tweeted Friday. “That is our system: one person decides.”