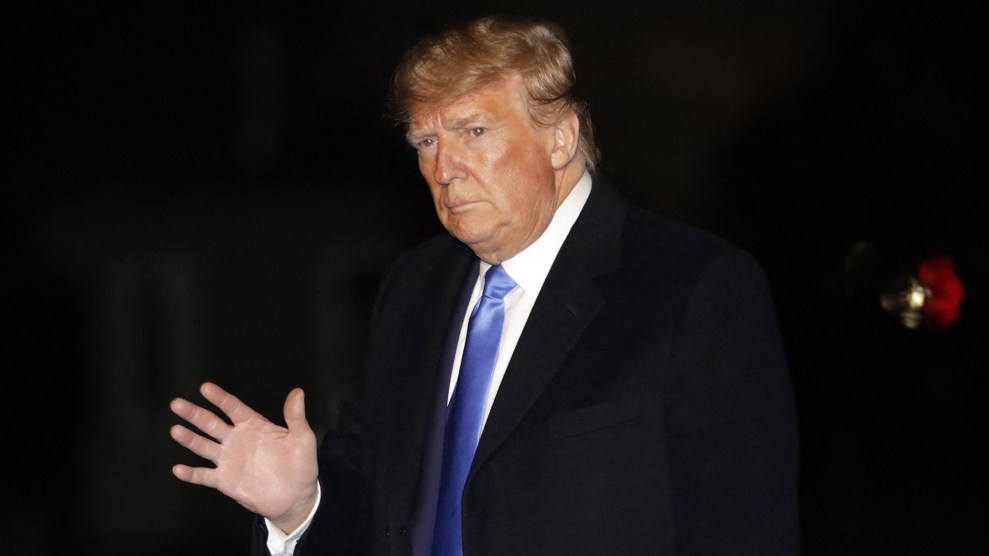 Trump returning to the White House from his Saturday rally.Yuri Gripas/Abaca via Zuma

According to the Miami Herald, during his speech at Florida Republicans’ annual Statesman’s Dinner, Trump brought Army 1st Lt. Clint Lorance and Maj. Matt Golsteyn in front of the crowd. Trump controversially pardoned the two—along with former Navy SEAL Edward Gallagher—last month against the recommendations of senior military leaders. Lorance was serving a 19-year prison sentence for murder after ordering soldiers to open fire on three unarmed Afghan men in 2012, killing two. Golsteyn had been charged with premeditated murder after admitting to shooting a detained, unarmed Afghan man in 2010. Golsteyn killed the prisoner off-base and buried his body, only to dig it up later, bring it back to the base, and burn it in a pit used to dispose of trash, according to the Washington Post.

The men’s appearance at a party rally and fundraiser confirm that Trump sees political value in his interventions on behalf of soldiers who were charged by uniformed military prosecutors with the most serious crimes. After the pardons, the Daily Beast cited two sources who said they heard the president talk about how he would use the pardoned soldiers as political props in his 2020 reelection bid, with one saying they heard the president discuss “making it a big deal at the convention.”

Trump’s full pardon of the men came after a years-long push by the men’s supporters, including Fox News personality Peter Hegseth, a former Army officer, and Rep. Duncan Hunter (R-Calif.), a former Marine who announced he would resign from Congress after pleading guilty to improperly using campaign donations to fund a series of affairs and for a variety of personal expenses. One embarrassing transaction unearthed by prosecutors recorded Hunter buying an item of clothing at a golf pro shop while representing the spending as buying golf balls for wounded veterans.

Ahead of the pardons, Trump summed up his thoughts on the prosecutions on Twitter:

The case of Major Mathew Golsteyn is now under review at the White House. Mathew is a highly decorated Green Beret who is being tried for killing a Taliban bombmaker. We train our boys to be killing machines, then prosecute them when they kill! @PeteHegseth