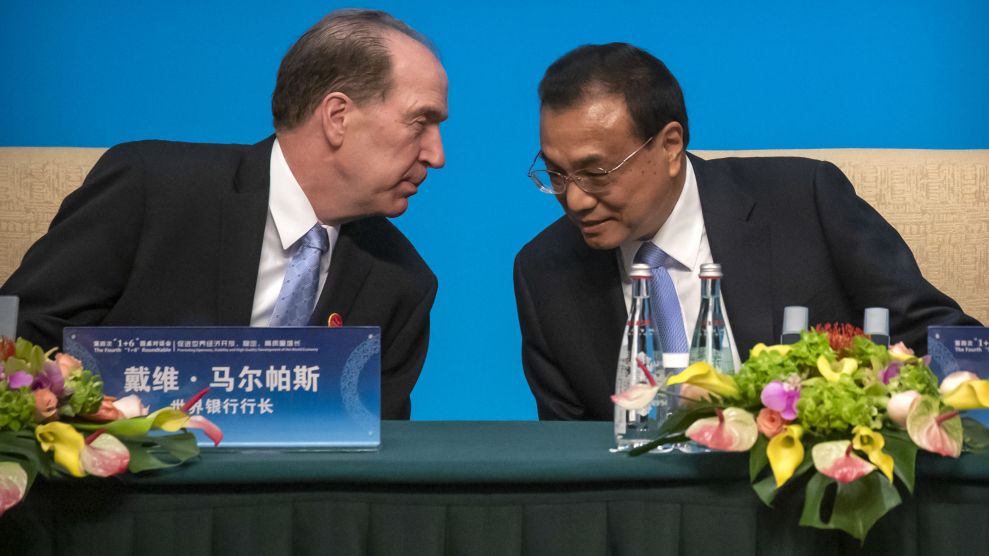 This summer, a World Bank consultant born in Taiwan faced an agonizing choice. After employing the consultant for years on a contract that was renewed annually, the bank had imposed a new requirement: The consultant would have to obtain a passport from the People’s Republic of China.

“I don’t have an option. I cannot get a Chinese passport.”

This would be no simple matter. The two countries are adversaries. Ever since the Chinese civil war that divided China and Taiwan 70 years ago, China has refused to recognize the island as a sovereign nation, insisting it is actually part of China. For its part, Taiwan bars its citizens from holding dual citizenship with China. That means the consultant would have had to give up citizenship at home in order to keep the job. Instead, the person, who requested anonymity out of fear of retaliation, declined to renew the contract. “They left me with no choice,” the person said. “I don’t have an option. I cannot get a Chinese passport.”

This is one of several examples in which the World Bank’s requirement that Taiwanese employees obtain Chinese passports caused employees to leave the bank or to lose chances to work there, according to people familiar with the policy. The sources said that the World Bank’s human resources department began informing Taiwanese employees and job seekers of this requirement early this year. When employees questioned the policy, the bank informed them that it was not a mistake: They needed Chinese passports as soon as possible. Last week, after inquiries from news organizations, the bank announced it was rescinding the requirement.

The bank now faces congressional scrutiny over the matter. “We’re investigating the issue,” Senate Finance Committee spokesperson Micheal Zona said in an email. The House Financial Services Committee is also asking about the controversy, according to the bank. In addition, the House Foreign Affairs and Senate Foreign Relations committees have received briefings from the bank about the passport requirement, two people familiar with the briefings said.

Since its founding in 1944, the Washington-based World Bank—which finances development projects in impoverished countries—has always been headed by an American, which reflects the United States’ status as its largest shareholder. But China’s rising economic might has helped it increase its global influence, and it has used that growing power to pressure countries, corporations, and international institutions to accede to its wishes on issues like Taiwan. People who have worked at the bank told Mother Jones they suspect the passport requirement was pushed by Chinese officials at the bank.

Last week, the World Bank publicly confirmed that its human resources department had indeed communicated the Chinese passport requirement to Taiwanese employees. But the bank downplayed the issue. A spokesperson said the requirement was unofficial guidance, dating to 1999, that was mistakenly placed on its internal website but was “never adopted as policy.” The spokesperson said that when the bank’s senior management learned of the requirement, “steps were immediately taken to revise the guidance.” The bank says it currently has only three Taiwanese employees. The reversal means those three employees no longer have to get Chinese passports, according to the bank. The existence of the passport requirement—and the bank’s promise to eliminate it—was first reported by Axios.

The World Bank also says the requirement placed on Taiwanese employees was inconsistent with the bank’s written policies, including staff employment policies that require fair treatment of employees. “It is regrettable that this past practice led to some staff being asked to obtain another passport for purposes of employment as a national of that member state,” a bank spokesperson said in an email. “This was not consistent with our values as an institution and has been remedied.”

“This is really about the PRC insinuating itself into World Bank decision making.”

But the passport requirement was more robust than the World Bank’s announcement suggests. It affected not only current employees, but also an unknown number of past staffers and potential job applicants. The bank says it does not know what passport applicants hold when they first apply for a position. Yet Taiwanese job seekers, when actually considered for a job, have been informed that they would need a Chinese passport to be hired, according to interviews and electronic messages reviewed by Mother Jones.

The bank would not say if the passport requirement resulted from Chinese pressure and instead attributed it to a longstanding policy that prioritizes hiring from member states. China is a World Bank member. Taiwan is not. That policy remains in place, meaning that Taiwanese citizens who decline to obtain a Chinese passport might still be at a disadvantage when applying for future positions.

Bonnie Glaser, who studies Chinese power at the Center for Strategic & International Studies, said she believes the passport issue is part of a larger effort by China to use its growing influence to win favorable policies from international organizations and other institutions. “This is really about the PRC insinuating itself into World Bank decision making,” Glaser said. “There are lots of positions within the bank that are held by Chinese. You can find the same thing at the [International Monetary Fund]. This has led to China’s voice being even more important than it otherwise would be. So of course it’s a function of China’s growing clout internationally. But it’s also a function of China using this to get positions with the fund and within the bank to try and ensure that the policy at the bank and the IMF are favorable to China. And they have been quite successful.”

Chinese influence at the bank is already the subject of substantial US scrutiny. Earlier this month, Treasury Secretary Steven Mnuchin told lawmakers that the US had objected to the World Bank’s plans to continue lending to China and backing projects there. Sen. Chuck Grassley (R-Iowa), the chairman of the Senate Finance Committee, has pushed legislation to block the World Bank from lending to the Chinese. “I think many Americans would question why so many American tax dollars are going to support low-interest loans to China,” Grassley said in a December 5 floor speech, arguing that China has “surpassed the threshold at which it is supposed to graduate from World Bank funding.” Grassley has also ripped the bank for lending money to a school in China’s Xinjiang province that is reportedly linked to the mass internment of Uighur Muslims.

In a statement Wednesday, Ting-Hsuan Chang, a press officer for Taiwan’s diplomatic mission in the US, said the office had been contacted about the World Bank’s passport requirements “by several current and former staff members” at the bank and had raised those concerns with the bank’s leadership.

“We are please[d] to see that the World Bank will base its employment policy on diversity and inclusiveness, instead of being dictated by a single nation, so that its workforce can truly advance development goals in ways that reflect its values,” Chang said.