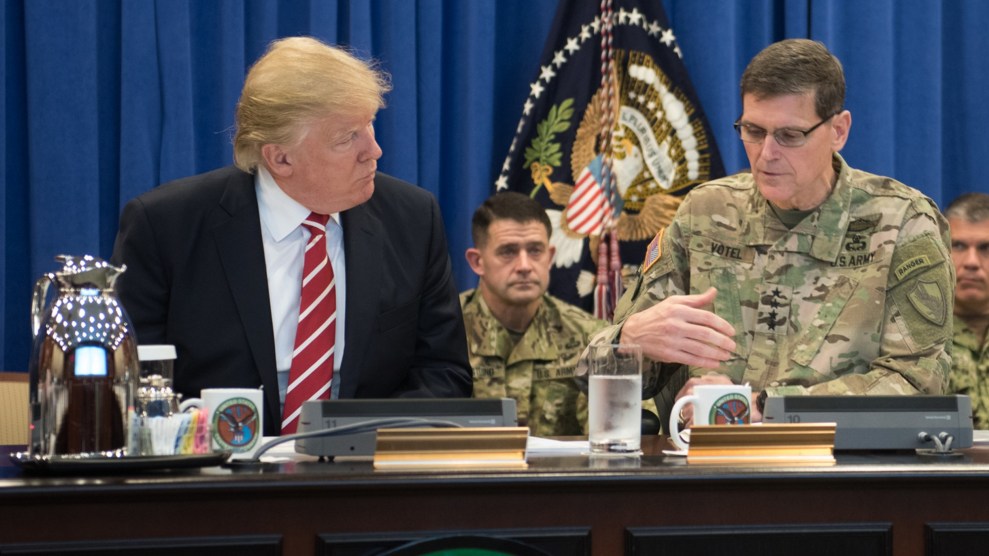 In July, Democrats amended the House version of the annual National Defense Authorization Act to prohibit discrimination in the military on the basis of gender identity. Ten House Republicans voted with Democrats to lift the ban, but the version of the bill passed by the GOP-controlled Senate did not even address the issue. The compromise bill, which emerged late Monday after conference negotiations between the two chambers, leaves Trump’s ban in place. In place of the original Democratic provision, it mandates that the Pentagon periodically release data on service members affected by the ban and track how many exemptions are granted by military leaders.

“It is unconscionable that thousands of honorably serving transgender service members and their families will continue to live under the threat of discharge simply because of who they are,” said a statement released by several advocacy groups, including the Human Rights Campaign, the National Center for Transgender Equality, and Lambda Legal. “This ban is based on bias, not evidence, and is opposed by the American people, military experts, and elected officials across the political spectrum.”

Trump announced the initial version of his ban on transgender troops in July 2018, citing the “tremendous medical costs and disruption that transgender in the military would entail.” In fact, the Pentagon has only spent close to $8 million since 2016 on medical care for transgender service members—or 0.016 percent of the department’s estimated $50 billion in yearly health care costs.

The surprise directive—announced via tweet—shocked military leaders, who had just witnessed the Obama administration reverse a similar, longstanding ban on transgender troops. After a series of lawsuits failed to block Trump’s new policy, the Pentagon began implementing a softer version of the ban last year, which allowed for various exemptions for troops already serving openly in their preferred gender. But it left in limbo the status of new enlistees and service members in the process of transitioning.

Democrats widely supported reversing the ban, but its status as one of numerous amendments added to the House version of the NDAA made it ultimately expendable as part of negotiations with the Senate. Other provisions supported by progressive Democrats—including an end to US support for Saudi Arabia’s war in Yemen, limits on Trump’s ability to fund a border wall, and restrictions on the release of certain toxic chemicals by the military—also failed to make the final bill. Meanwhile, the overall defense spending figure, at $738 billion, is less than the $750 billion initially provided by the Senate, but $5 billion more than what the House approved. The most significant deal lawmakers made as part of the negotiations was an agreement to grant federal employees 12 weeks of paid parental leave in exchange for the creation of Trump’s promised Space Force.

Not all Democrats were swayed by the paid leave deal, setting up the possibility that progressive Democrats will defy Speaker of the House Nancy Pelosi (D-Calif.) and oppose it on the House floor.

“Congress must vote against this disastrous Pentagon authorization—a bill of astonishing moral cowardice,” Rep. Ro Khanna (D-Calif.) and Sen. Bernie Sanders (I-Vt.) said in a joint statement. “Congress should have used this National Defense Authorization Act to stop our endless wars. Instead, this bill does nothing to rein in out-of-control military spending, prevent unconstitutional war against Iran, limit the poisoning of Americans’ drinking water, or end the obscenity of innocent children in Yemen being killed by US bombs.”