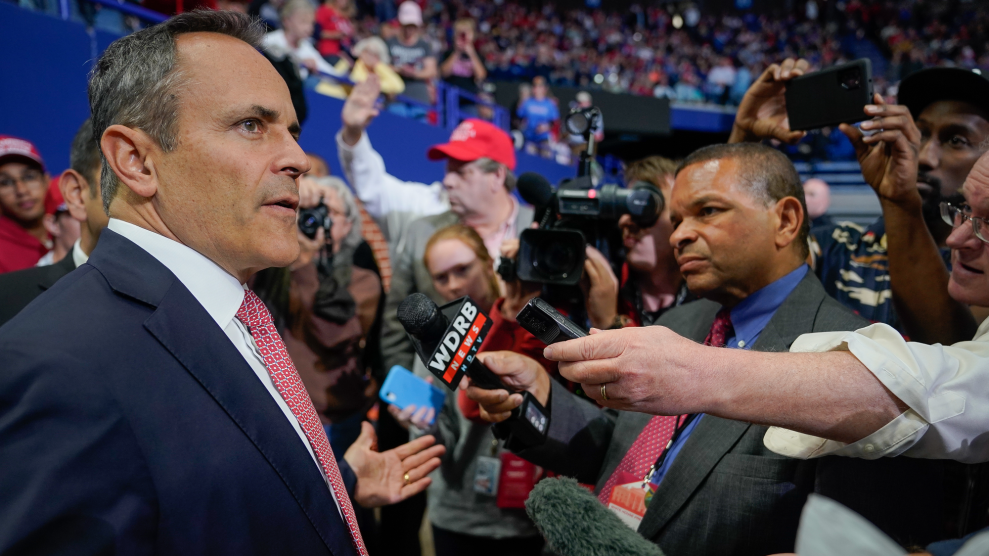 Gov. Matt Bevin of Kentucky speaks with the media at a rally in Lexington on Nov. 4, 2019, the night before he lost re-election.Bryan Woolston/Getty Images

This article was originally published by ProPublica, a Pulitzer Prize-winning investigative newsroom. Sign up for The Big Story newsletter to receive stories like this one in your inbox.

The right-wing radio personality took to Twitter not long after the polls had closed and it seemed the Democtratic candidate had prevailed in the excruciatingly close race for governor of Kentucky.

“Today #ELECTIONFRAUD and what is going on in #kentucky is REAL,” the host of “Tore Says,” streamed on the Red State Talk Radio website, tweeted on Nov. 8. “How do I know? I am actually have EVIDENCE because me and my family are VICTIMS of it.”

The personality, whose real name is Terpsichore Lindeman, alleged that somehow she and her husband had wound up as registered Democrats in Kentucky, which she saw as a sure sign that Andy Beshear, the Democratic attorney general ultimately declared the winner of the race for governor, had been manipulating the voter rolls.

Lindeman said that she is not a Democrat, and that she had her name removed from the rolls when she and her husband left the state years ago. Indeed, she said her husband is not a U.S. citizen and should not have been on any voting roll.

The claims gained no small degree of exposure. Lindeman’s dozens of tweets on the matter were retweeted hundreds of times. InfoWars, the conspiracy theory website, repeated her claims in multiple articles over a series of days. The website of the far-right activist Laura Loomer featured the story prominently. The Kentucky State Board of Elections received calls from alarmed voters, all while incumbent Republican Gov. Matt Bevin — who’d lost the election — talked darkly, but without specifics, about “irregularities” on Election Day.

ProPublica decided to check out Lindeman’s claims, and none add up, falling apart in the face of routine checks of public records. Still, experts say the disinformation spread by Lindeman in Kentucky and the virality and confusion that ensued is a peek into what could befall voters in 2020, when similar techniques are expected to be part of the arsenal of both the right and the left.

Amy Cohen, the executive director of the National Association of State Election Directors, said that the spread of misinformation and disinformation are “serious concerns going into 2020 because they undermine confidence in the election process.” Her organization, which represents elections directors from across the country, works closely with Twitter and other social media platforms to report similar issues.

Debunking Lindeman’s claims starts with her and her husband’s voter registration information, which are public records. Their Kentucky registration forms show that both checked the box for Democrat when they registered to vote in Fayette County in 2008. Her husband, who Lindeman claims is not a citizen, also signed the form in 2008, which requires signers to attest they are a U.S. citizen. Lying on the form carries a penalty of fines or jail time of up to 12 months. The couple, records show, have never removed themselves from the rolls or changed their registration status until Nov. 8 of this year, which is when she began tweeting.

Neither Lindeman nor her husband appears to have voted in the last five years. Records also show that Lindeman was a registered Democrat in Florida, where her registration status is currently inactive.

Of her husband, Fayette County Clerk Don Blevins said: “If he’s really a noncitizen, he should be concerned. It’s a crime to register if you are a noncitizen; it says so right there above his signature.”

The claims by Lindeman were only one aspect of efforts to raise questions about the integrity of the vote in Kentucky this month.

Online, someone who routinely retweeted posts from the Democratic Socialists of America claimed to have shredded hundreds of ballots filed by mail by Republicans. State officials say there is no evidence that this took place. Twitter terminated the person’s account, but screenshots of the tweet went viral and became a talking point for conservative commentators.

In an emailed exchange with Jared Dearing, the executive director of the Kentucky State Board of Elections, and Cohen, Twitter declined to take down the screenshots. The company claimed they did not violate Twitter’s rules against misleading information.

Dearing said that Kentucky is ready to combat misinformation and disinformation. “We remain hopeful social media platforms will also take a responsible stance in taking these posts down as they are identified, and do so in a timely and meaningful manner,” he said.

Gideon Blocq, the co-founder and CEO of VineSight, a company that monitors the spread of misinformation online, said he watched as the tweet spread through thousands of bots. “This says something about what’s to come in the near future,” he said, saying that while Bevin did not specifically repeat the information in this tweet in any of his announcements or press conferences, the “similarity of the two storylines made this a more effective campaign.”

In the days after the election, Citizens for Election Integrity, a right-wing organization, held a news conference alleging mischief on the part of Democrats. Bevin publicly encouraged people and news organizations to attend.

At the news conference, Erika Calihan and Kristen Stuebs — both Bevin supporters — alleged, among other things, that a Louisville-area man had someone forge his signature and vote in his name at his precinct. The man was away at college at the time of the election, and his mother saw the signature and had filed a complaint with the attorney general’s office. The pair played a video of the man complaining about the situation.

“We’re just two moms,” the pair told the local media, saying they had no expertise and were only concerned citizens offering “breadcrumbs” for reporters to follow up on.

The local media did follow up, but the crumbs led nowhere. The alleged forger was actually a legally registered voter with an identical name registered in the same district.

A person who works closely with the Republican Party said Bevin had been “on his own” when he alleged unspecified misconduct in the vote. The party, however, did nothing publicly to dispel the claims. A party spokesperson did not return calls for comment.

“The way in which we handle these sorts of allegations from a losing candidate in 2019 will tell us if our democratic norms can sustain the same thing in 2020,” he said. “Not enough people were speaking out about this rhetoric.”